This week’s SmackDown was better than this week’s RAW. Not that you’d know that from listening to the crowd. They were one of the most unresponsive bunches to attend a WWE show since… well… since Monday’s RAW actually. The lack of enthusiasm from Monday’s audience was to be expected though: Philadelphia is known for having a hard-to-please population of fans. Hershey should’ve been (slightly) rowdier.


Considering SmackDown’s status as the clear number two show WWE went to a lot of trouble to make this week’s broadcast enjoyable. For starters The Rock appeared. Opening the show with the biggest star currently affiliated with the company should have ignited the crowd for the rest of the evening. Instead ‘The Great One’ received a warm reaction that fizzled out once his music cut off, leaving him to play to crickets and the occasional bout of laughter.


The WWE champion was interrupted by John Laurinaitis. That was a strange move. The two have never interacted before and ‘Big Johnny’ hasn’t been seen on TV since last summer. Fans reacted to his entrance and the People’s Elbow he took but otherwise they seemed indifferent to the most random return of 2013.


Why WWE thought this was a good thing to put on TV I have no idea. Surely it would have made more sense to send a mid-card act out there instead. It didn’t do the Rhodes Scholars any harm back in January. 3MB, the Prime Time Players or Antonio Cesaro all would have been more interesting choices.


Bizarrely the crowd were fairly raucous by the time the main event rolled around. Who would have thought that Randy Orton, Big Show and Sheamus facing ‘The Swiss Superman’ and the Rhodes Scholars would get a more consistent reaction than The Rock? 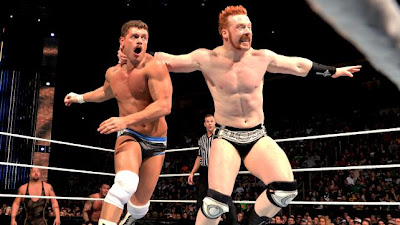 Cody's about to go for a moustache ride
Elsewhere on the show Ryback and Mark Henry competed in a weightlifting contest. Both men broke what was apparently a legitimate world record, although the specifics of this were not provided by the commentary team. This is peculiar considering how much JBL loves reeling off stats he’s copied off of Wikipedia.


That segment came to a screeching halt when Mark Henry choked ‘Big Hungry’ with a steel bar. It felt like too much. The ‘back versus Henry feud would have been fine if it had simply consisted of each man squashing jobbers and glaring at each other for several weeks. Presumably they’ll have a brawl next week.


It’s also worth noting that this segment featured Booker T and Teddy Long bickering with one another. It will lead to a heel turn for one of them, probably Booker. Unless the writing staff lose interest, that is.


Chris Jericho had a nice match with Wade Barrett. Miz was on commentary to cause a distraction and allow ‘Y2J’ to score the win with the Codebreaker. Following that Fandango rocked up and danced about before posing. He did not enter the ring. A minor surprise was that he managed to provoke a reaction from the fans.


Kaitlyn and Daniel Bryan defeated Dolph Ziggler and AJ in a decent match. Had they had three or four more minutes it could have been a very good outing. Sadly matches of this type only exist to advance feuds. In this case it was the already announced WrestleMania tag title match and the expected Divas title match between AJ and Kaitlyn. The latter is another example of a match that would benefit from a decent amount of time but probably won’t get it.


Finally, Jack Swagger and The Great Khali went to a double count out when ‘The Real American’ locked in the Patriot Act at ringside. Afterwards Hornswoggle got duffed up. I would have been happy for him to get written off TV here. He contributes nothing of value to anything he’s involved in.


After the destruction of the leprechaun Ricardo Rodriguez came out to distract Swagger and Colter. Alberto Del Rio snuck in through the crowd and tussled with Swagger for a bit. A month and a half ago I was excited by the prospect of a feud between Swagger and ADR. It seemed like it would be something inventive and provocative, a programme that broke the stale monotony of WWE’s booking formula. Sadly it’s turned out to be the endless stream of run-ins and brawls we see all the time. Here at least the Herhsey audience’s apathy was completely understandable.


Tweet 1: Tonight… ON SMACKDOWN!!
Tweet 2: The Rock, The Rock talking, The Rock, plus The Rock! Also Jack Swagger, The Shield and clips of Big Show playing babyface.


The Rock promo, featuring John Laurinatis and an absence of logical booking


Tweet 3: Rock's jerking the curtain. I wonder if he'll wrestle on this show...
Tweet 4: Three man announce team. Cole's overexposure continues.
Tweet 5: Rock's telling yet another story about his childhood. How was it so eventful? Answer: he's probably lying.
Tweet 6: Considering it's The Rock in the ring this crowd seems pretty subdued.
Tweet 7: Middle-aged women in the audience there, screaming with excitement for Rock's catchphrase. It's Michaels' Kliq groupies all over again.
Tweet 8: I kind of miss Rock's strange goatee from last year.
Tweet 9: John Laurinaitis is back! Why put someone who could benefit from a segment with The Rock in the ring? Give it to 'Big Johnny'. 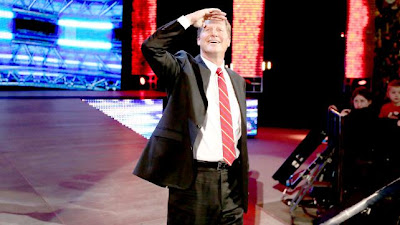 It's the return we've all be longing for: 'Big Johnny' is back!

Tweet 10: This should end with an impromptu WWE championship match in which Laurinaitis beats Rock, giving us Cena v Laurinaitis at WrestleMania.
Tweet 11: Hilarious non-selling of the People's Elbow there. Laurinaitis is like late 90s ECW Taz.
Tweet 12: Laurinaitis should be a colour commentator on NXT.


Tweet 13: I'm not that into the Jericho v Faaaaaan... daaaaaan... goooooo feud but I like Fandango as a wrestler.
Tweet 14: BARRETT RING COAT ALERT!!
Tweet 15: That black eye makes 'Y2J' look like he sleeps rough. Maybe he does.
Tweet 16: Miz had title matches at Royal Rumble and Elimination Chamber. He lost both. Why is he being awarded another at WrestleMania?
Tweet 17: Beating Barrett non-title isn't enough of a reason. This entire feud is stupid.
Tweet 18: Jericho now has a non-title win over Barrett too. When will HIS title match be? WHEN?!
Tweet 19: I wonder if Johnny Curtis took dancing lessons to play Fandango. He could just be making it up as he goes along.
Tweet 20: Ken Shamrock reference from JBL there. #surprising
Tweet 21: How long until Fandango's unnamed female associate wins the Divas championship?


Tweet 22: Is the bruise around Heyman's eye real? Looks like a bad makeup job.
Tweet 23: Predictably excellent work from Paul Heyman. Imagine who bad that video would've been if it had been Lesnar doing it himself.


Tweet 24: Booker and Teddy are on the stage, playas. #holla
Tweet 25: Booker needs to be careful of how he says "contest"...
Tweet 26: This should be booked as a comedy segment. It won't be. But it should be.
Tweet 27: They're teasing a rift between Teddy and Booker. I want Teddy to go heel and manage Henry again.
Tweet 28: SmackDown should feature weightlifting contests every week. This is amazing TV.
Tweet 29: "THAT'S WHAT I DO!" - Mark Henry after lifting some weights
Tweet 30: Ryback gets his throat crushed by Henry. It doesn't contradict Booker T's no-touching clause because Henry touched the bar. #wrestlinglogic 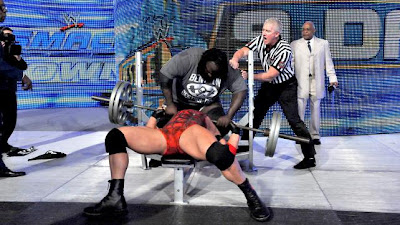 
Tweet 31: Bryan, Ziggler, Kaitlyn and AJ all in one match? This'll be the highlight of the show.
Tweet 32: "He absolutely explodes when he goes into somebody" - JBL with an inadvertently filthy comment on Big E Langston
Tweet 33: #nokicks
Tweet 34: Big E's scaring me. I'm constantly worried he's going to pop out.
Tweet 35: Kaitlyn spear > All other wrestling spears


Tweet 36: Here's a lovely little Shield ramble. Rollins and Reigns should shut up and let Ambrose do all the talking.
Tweet 37: They've got him beaten in the hair department though.


Tweet 38: The Great Khali can't even walk convincingly.
Tweet 39: And apparently Garcia can't say Hornswoggle convincingly. She said "Sportswoggle".
Tweet 40: Instead of being 'The Punjabi Playboy' Khali should be referred to as 'The Punjabi Pimp'.
Tweet 41: It would create a fresh new direction for Natalia.'s character.
Tweet 42: "He targets the leg" - Michael Cole as Jack Swagger headbutted Khali in the groin
Tweet 43: Hornswoggle should've had his ankle broken.
Tweet 44: ADR in through the crowd after a distraction from Ricardo. #itwasasetupallalong
Tweet 45: I do not approve of the jazzy remix of Del Rio's music. It's too jovial.


Tweet 46: Renee Young is an improvement on Matt Striker.
Tweet 47: Babyface superteams are the worst, Jerry. The worst.


Tweet 48: They should get a team name and entrance music so they can all skip to the ring together at WrestleMania.
Tweet 49: Sandow and Cesaro would make an even better team than Sandow and Magnum TA junior. Their gimmicks are similar.
Tweet 50: Oh no! Randy was isolated by the heels during the break! I think his team may lose... #kayfabe
Tweet 51: It's possible Orton won't turn on Sheamus at WrestleMania. They could form a team and win the tag titles instead.
Tweet 52: Amazingly the audience has woken up for the main event after being quiet for the entire show.
Tweet 53: Show, Sheamus and Orty won. Who saw that coming, eh?
Tweet 54: Post-match Shield beating hijinks.
Tweet 55: The show goes off the air with three knackered looking men posing in the crowd. Maybe WWE should let up on the live event schedule.
Posted by Dave at 21:23