Here in Britain we have something called a panto. It’s a traditional story, such as a fairy or folk tale, of a hero turned into a deliberately camp stage play aimed at children. There are numerous other tropes involved, cross-dressing and risqué comments are the big two, but the general thrust of any panto performance, no matter the story it’s based on, is the hero’s quest to overcome the schemes of a villain.


As is the case with wrestling the audience plays a key part in the performance. They’re encouraged to cheer the hero and boo the villain. This is achieved through the script the actors play to. People know who’s good and who’s bad by what they say.


In wrestling the same thing is achieved through promos. Both mediums also get across a character’s intent through body language and clothing choices but it’s what’s said that’s most effective.


Wrestling fans are still an important part of the act, but their role is downplayed. In part this is because of the long-established nature of the business: fans will always be outsiders and marks.


The role of the hero is pretty much the same in both mediums. They’re there to be cheered. They’ll be downtrodden for a bit but ultimately they’ll emerge triumphant (well usually… it doesn’t always happen in the grap biz).


Villains and heels are a different kettle of fish. A panto villain elicits boos by directing nasty remarks at the hero of the story. The audience empathises with this hero and so dislikes the villain. A wrestling heel can do this too but over the years it has become far more common to see them targeting the fans in the crowd. It’s a more personal approach and so it’s easier to obtain the desired reaction.


To an extent this is a perfectly reasonable way of drawing heat. Insulting a local sports team or celebrity is a logical way to turn a crowd against you. Sweeping generalisations about a town’s populace can work too but even there caution is required.


All too often wrestling bad guys go too far with this approach. Two weeks TNA world champion Bully Ray did just that. As he exited through the crowd (a standard part of the Aces and Eights act) Bully targeted a fan in the stands, berating him with homophobic slurs and telling him he was getting punked in front of his daughter. I would imagine this was not an enjoyable experience for the fan or his family.


Late 90s ECW saw Ray do this sort of thing all the time. While I’m not justifying it I do think it was a more understandable approach to employ then. That promotion was known for being a more adult product and it was established that the wrestlers would interact with fans in that fashion. The Dudleys were a particularly gifted act when it came to riling fans. It’s part of what made them successful in the company and helped them to sign with the WWF and become so well known. 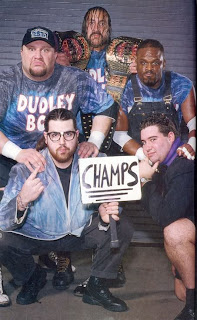 Back when cheap heat was the in thing these guys were the masters. Old habits die hard
Things are different now. The climate at wrestling events has changed and this sort of behaviour is incredibly behind the times. It’s cheap and nasty. In 2013 when a fan buys a ticket to a wrestling show they’re entitled to a certain level of respect from the wrestlers. Even if these things weren’t true TNA and ECW are very different companies. TNA markets itself as family friendly. ECW did not.


Wrestlers, particularly those who have been around for as long as Bully Ray, should be able to turn fans against them without resorting to these sort of shortcuts. You wouldn’t find John Barrowman cutting promos like that while starring in Aladdin.
Posted by Dave at 18:46