Bully Ray has become TNA’s new chief heel, turning on his storyline father-in-law and wife (Hulk and Brooke Hogan respectively). He’s also been revealed as the boss of the Aces and Eights gang (pipping long time favourites Jeff Jarrett and Eric Bischoff to the post) and become the company’s world champion into the bargain, unseating the popular Jeff Hardy.


All of this happened in the space of one match at Lockdown. It was a busy, some may say frantic, evening for TNA and for Bully. But then the company has never been known for their well-paced stories. 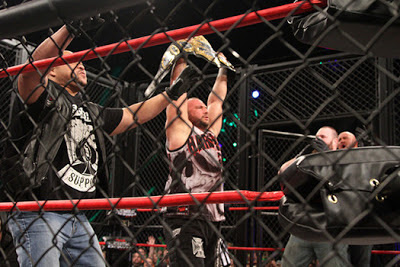 I remember watching Hardcore Heaven '99, headlined by Ray versus Taz for the ECW championship, and thinking Bubba would never win a world title. Looks like I was wrong...
I wrote on Sunday afternoon that I wouldn’t be averse to a Bully Ray world title reign. I’m still not. I think Ray as a performer is easily good enough to be the top guy in TNA. I’m less thrilled by his heel turn though. He’d become a popular act for TNA, and I think fans would have been willing to embrace him as a top line babyface far more than they were James Storm. By switching him back to bad guy mode TNA have short-changed themselves.


It’s the situation we have though, and while I’m not especially interested in the dealings of the alleged outlaw biker gang and their newly revealed miscreant leader I am interested in seeing who Bully is pitted against in his new role. At the top of his challenger list will obviously be Jeff Hardy. As the wronged former champion ‘The Charismatic Enigma’ is the clear choice to be Bully’s first challenger.


The question of when is an interesting one. TNA’s next pay-per-view will be June’s Slammiversary XI (celebrating eleven years of abject nonsense). That’s a long time to wait to book a rematch. The time could be padded out with Bully originally refusing to grant Hardy his return bout, and then eventually booking it for an episode of Impact and having it end in a disqualification. Even with those tricks it’s a long time to wait.


With three months to play with TNA should really be planning on wrapping up the Hardy v Bully feud (and the Aces and Eights v TNA for that matter) earlier than Slammiversary. If built up for several weeks beforehand the rematch could get Impact a strong rating. That’s what the plan should be.


I wouldn’t be surprised if Sting and Hulk Hogan were booked in challenger roles too. Both men gave their storyline trust to Bully and were betrayed by him. Booking Bully against either man at Slammiversary seems fairly likely. If I had to pick between the two I’d go with ‘The Stinger’. He may be fifty-three but he’s more spry than Hogan.


Of course ‘The Hulkster’ is the bigger name of the two and the entire Brooke-Bully marriage plot has started to look like an elaborate setup for a Hogan v Bully match since Lockdown. Couple this with Hogan’s talk since late last year that he wants to return to the ring and be TNA champion and the fact that he’s involved in the promotion’s booking and a Bully v Hogan match looks inevitable. 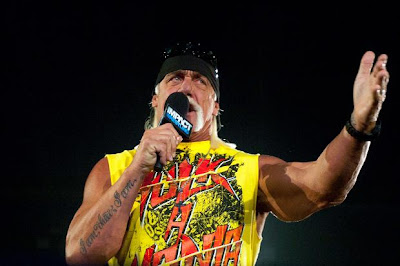 Bully Ray's next pay-per-view opponent?
Will Hogan beat Bully for the gold? If ‘Calfzilla’ is still champion when the two clash I think there’s a strong chance of that happening. However, it’s also possible Bully will drop the belt over the summer and headline October’s Bound For Glory in a non-title outing with Hogan.


The man that should be used as the next challenger after Jeff Hardy is James Storm. He’s someone who was being promoted as one of the leading forces of TNA early last year. Sadly his push cooled and he’s done very little of interest for the last year. Portraying him as the outraged, loyal TNA guy and having him target Bully for messing with the company could help to rehabilitate him. Something needs doing, or he may as well be released.


Kurt Angle, Samoa Joe, and Magnus would all make very good television opponents for Bully. In the case of Angle the match should be built up far in advance so that it can attract a good TV rating. ‘The Cyborg’ shouldn’t be wrestling regularly with his dozens of nagging injuries. If he appears on TV it should be a big deal.


We’ll have a better idea of who will challenge for Bully’s gold next after Thursday’s Impact. Whoever it is I don’t think it will convince me that Bully leading Aces and Eights is a good thing. Turning Bully has come at the cost of a popular act that had plenty more to do. He would have been of far greater benefit as a face. But then short-sightedness is nothing new for this company.
Posted by Dave at 11:14