Last week’s NXT felt sparse. This week’s show more than made up for it with matches featuring Kassius (or Kass-yus, as Tony Dawson likes to call him) and Bray Wyatt. Even Big E Langston had a match. That’s become something of a novelty since he got called up to the main roster to work as Dolph Ziggler’s enforcer.


The NXT champ worked a competitive main event against the United States champion Antonio Cesaro. That came about when ‘The Swiss Superman’ interrupted an address by World Heavyweight champion Alberto Del Rio. It was a strange segment. The World champ essentially showed up to be interrupted and provide the impetus for a match featuring two men he usually has nothing to do with. It would have been more interesting to see him wrestle someone like Corey Graves or Conor O’Brian.


The Big E v Cesaro match was good. WWE has a peculiar habit of booking guys that start out winning via squash in longer and longer matches. Look at what happened with Ryback and Brodus Clay last year. I suppose it makes sense to do this on NXT: it’s supposed to be somewhere guys improve and they’ll improve far quicker if they’re given longer matches.


Ohno wrestled against Derrick Bateman. Oddly it was Daniel Bryan’s former on-screen protégé that dominated the majority of the match. Ohno, by far the man with the higher standing, got what amounted to a fluke victory after booting Bateman in the chops. The booking wasn’t bad, but it was surprising.


Following his win Ohno slapped his STF kravat hold onto Bateman. William Regal made the save. I’ve written before that a televised collision between them would be A Good Thing. If announced a week or two in advance and built up as a meaningful match it would make a very worthwhile main event. 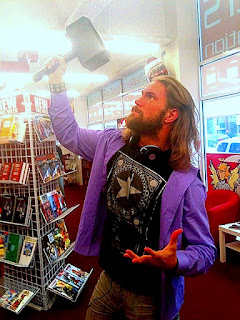 Ohno channelling Thor in preparation for his upcoming showdown with William Regal
Bray Wyatt lost to Bo Dallas. It was a relatively uninspiring showing. Bray’s good in the ring, but he’s far more interesting as a character than as a wrestler. His opposition didn’t help. I’m not a fan of Dallas: everything from his long, stringy hair to his generic wrestling style put me off him.


Wyatt puts me in mind of Raven during his ECW heyday heading up the Flock. The Wyatt Family isn’t as impressive as that iconic and eclectic stable but Bray has many similarities with Raven. They both work a brawling style, wear street clothes for their matches, and are excellent promos. There’s a hint of the old Raven trait of being a cult leader in Bray too. I like the similarity. Raven was underappreciated everywhere outside of ECW. I’d like it if Bray could succeed in WWE with a similar gimmick.


Tweet 3: It’s Kassius… OHNO!
Tweet 4: This has been on my mind for a while now: what's going on with Bateman's hair. Looks like he's asked for the "Elaine from Seinfeld" look.
Tweet 5: Dawson is still saying "Kass-yus". Weird fella.
Tweet 6: Bateman was on offence for most of that. Ohno pulled out a win with a boot to the face. Booking Bateman like a job: good stuff!
Tweet 7: Regal saved Bateman from a devastating kravat. The fans gave him a token, brief, chant.


Tweet 8: It's Emma. She still seems drunk. I don't understand this act at all.
Tweet 9: "If you thought she was talented with the microphone..." - Tony Dawson on Summer Rae (he tailed off and didn't finish the sentence)
Tweet 10: Regal says Summer's wrestled like a veteran in the women's division.
Tweet 11: She's been wrestling for about a month. With the division the way it is that qualifies her as a veteran. 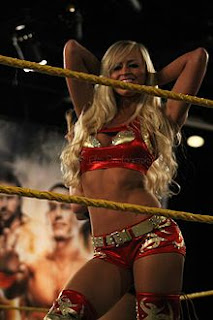 Is that Summer Rae or Kelly Kelly? It's difficult to tell...

Tweet 12: According to Regal Summer just performed a "headmare".
Tweet 13: Spinning heel kick there. It would be more accurate to say spinning thigh kick but never mind.
Tweet 14: Paige's return was greeted with apathy. Probably because the fans forget she was supposed to be "injured".


Tweet 17: You know Big E Langston's a star because Matt Striker's been called in to interview him.
Tweet 18: Big E's defense against Conor O'Brian will be delicious. I hope that match features Langston licking O'Brian several times.


Tweet 19: When Bray Wyatt is given the chance to cut promos on people that matter he'll become a star.
Tweet 20: Bo Dallas does not matter.
Tweet 21: Was Wyatt just singing a song from The Lion King?
Tweet 22: The Wyatt Family should recruit more members. Stick Justin Gabriel in and have him dress in a giraffe outfit. It'd be a refreshing change.
Tweet 23: Bo Dallas beating Bray is apparently a shock, even though he's the one who won a slot in the Rumble and beat Wade Barrett.
Tweet 24: Bray's finisher should be called the Husky DDT. 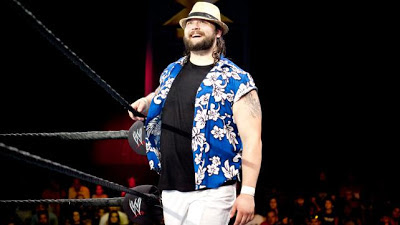 Not dissimilar to Raven


Tweet 34: Big E Langston, walking to the ring through an explosion of powder. What a man! What a MACHINE!
Tweet 35: I'd like Dawson to say that Langston is "285 pounds of pure Big E goodness."
Tweet 36: Cesaro doesn't wear kneepads. He doesn't wear elbow pads. You're lucky he's wearing trunks!
Tweet 37: That uppercut was very European.
Tweet 38: Cesaro deadlifting Langston is the highlight of this show. His expression was priceless.
Tweet 39: E Train? Good name for a move. Ridiculous, but good.
Tweet 40: Conor O'Brian and Corey Graves do run-ins. This qualifies as chaos according to Dawson.
Tweet 41: Langston is clearly not popular with the locker room. Nobody made the save. Not even ADR.
Posted by Dave at 10:59