The fact that NXT airs weeks after being recorded can sometimes lead to strange situations. Like on this week's show, where Corey Graves, Conor O'Brian and Bo Dallas were to clash for the second week in a row and it wasn't mentioned by the commentary team. The two shows had been recorded weeks apart rather than on the same night, which presumably led to the forgotten emphasis.

Things like this don't happen often on NXT, and they're not major problems when they do. It remains jarring though.

The triple threat match was to decide on the next challenger to Big E Langston's NXT championship. Annoyingly Conor O'Brian won. He faced Big E a few weeks ago in a decent match that went to a no contest. I'd have preferred one of the other two men to win to give us something fresh. Graves in particular would have been a far more interesting choice than 'The Ascension'. 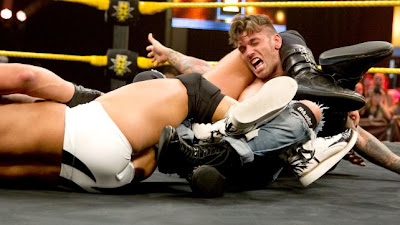 All three-way matches should have a spot like this

In a way this illustrates one of the good things about NXT. There is a distinct lack of an upper tier, which places everyone on the same level and creates an atmosphere where anyone could realistically win the title if given the chance. This makes it an unpredictable watch, and unpredictability in wrestling is rarely a bad thing.

Will O'Brian defeat Ziggler's bodyguard? It's possible but I wouldn't say it's likely. Big E is doing very well on NXT and a loss could harm him.

Elsewhere on the show six Divas fumbled their way through a six (wo)man tag team match. The heel team of Alicia Fox, Aksana and Audrey Marie were on target for most of the bout. On the opposite side of the ring Sasha Banks looked good, Cameron looked decent, and Naomi looked horrendous.

Leo Kruger beat Yoshi Tatsu with the London Dungeon in a brief outing. And lastly (in the opener, ironically) Adrian Neville won a handicap match against two nondescript villains, both of whom were larger than him, after Oliver Grey was assaulted backstage by the Wyatt Family. The fiends!

Speaking of the Wyatts the saga of Bray attempting to recruit Bo Dallas continued during this show. First Dallas was approached during a backstage interview (in which he was bragging about winning a Rumble slot, which happened well over a month ago and made me wonder if I was accidentally watching an old episode) and then Bray sauntered to ringside during the main event. It was the Family leader pulling Corey Graves out of the ring that distracted Dallas and allowed 'The Ascension' to get his win.


Tweet 6: Who are these jabronis in the generic gear?
Tweet 7: PAC's lost Oliver Grey. He's going to wrestle a handicap match. This is known as Ryback Syndrome.
Tweet 8: I don't think I want to know what the Wyatt Family got up to with an unconscious Grey.
Tweet 9: Pretty shoddy medics over there at the NXT Arena. 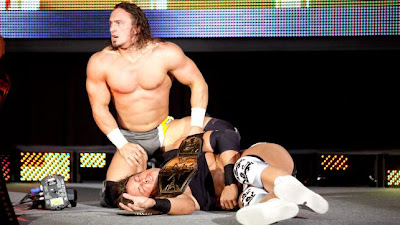 Where were the medics?


Tweet 10: What happened to that face paint or half mask or whatever it was that Yoshi was wearing?
Tweet 11: I've not actually seen much of him since last year so he probably dropped it a while ago.
Tweet 12: Is South Africa on Twitter?
Tweet 13: London Dungeon there. Lovely to see.


Tweet 14: Six Diva tag match. Expect botches.
Tweet 15: The Funkadactyls' aren’t troubling 'Taker for Best Ring Entrance Ever.
Tweet 16: Alicia Fox is a heel again? Why? Why not?
Tweet 17: Naomi is breathtakingly sloppy here. It's no wonder they don't let her wrestle on important shows.
Tweet 18: It's over. I can say that that was certainly a wrestling match.
Tweet 19: The winning Divas hug one another to celebrate. Why are Kane and Bryan the only male team that does that?


Tweet 22: Here's Summer Rae. Generic interview ahoy!
Tweet 23: Summer Rae is the argument in favour of scripted promos. Imagine how bad she'd be if she could do what she wanted.
Tweet 24: #Shieldvision
Tweet 25: Basically, The Shield are going to carry on doing run-ins and nobody's going to stop them. Not even the mighty Dusty Rhodes.


Tweet 26: The commentators don't seem too bothered with reminding us that this match was due to happen last week. It's peculiar.
Tweet 27: I don't know this referee's name but for what it's worth I don't care for him.
Tweet 28: "I truly believe that size does matter" - William Regal
Tweet 29: I can't imagine Bo Dallas or Conor O'Brian anywhere except WWE. They don't look like guys that would succeed in ROH or TNA.
Tweet 30: O'Brian's gimmick would work in CHIKARA though. Probably.
Tweet 31: Why isn't Corey Graves billed as being from "The Dumpsters of New York City"?
Tweet 32: For the record I want Graves to win this. Best wrestler in the match. I think him versus Big E would be good.
Tweet 33: Bray update: he is stood at ringside dressed, as usual, like someone who handles alligators for a living.
Tweet 34: 'The Ascension' wins. It's the worst possible scenario: an uninspiring challenger that we've seen wrestle the champ before.
Tweet 35: In twenty years O'Brian will be held in the same regard as the Undertaker.
Posted by Dave at 22:00