You may have noticed Brie and Nikki Bella are back in WWE. They've returned to the company that made them famous for two reasons. The first is that established female performers are needed to save its flimsy Divas league. The second is that whatever projects they were banking on for their post-WWE life didn't work out as planned.

If rumours are to be believed the Bellas aren't the only women WWE have contacted for a return. They are the first to agree to terms on new contracts. Other women who have apparently been contacted are Maryse, Kelly Kelly, Beth Phoenix and Kharma. That Brie and Nikki are back shows that WWE are aware of the problem they have and indicates that they want to do something about it.

The thing is that the company should have tried harder to re-sign them in the first place. The company books the Divas as an afterthought but it clearly cares enough about them to want to have something resembling a worthwhile division around. If they felt otherwise they'd simply retire the concept of female wrestlers and have all the women under contract work as valets or in other on-air roles. 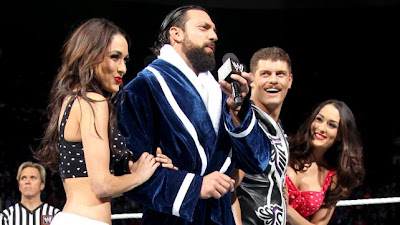 Kharma left the company under difficult circumstances without ever wrestling a televised match. Beth Phoenix decided to retire. Maryse and Kelly Kelly both wanted to pursue careers outside of wrestling. I'm unsure how K2's getting on with that but I know Maryse has launched her own jewellery line.


With a bit of leniency when it came to negotiating WWE probably could have retained the services of Maryse and Kelly. Both women wanted to able to do non-WWE stuff in their spare time without getting authorisation from management. WWE dislike this because they feel they should profit from anything contracted talent do. Seems unfair to me, considering WWE is a multi-million dollar company.


A more reasonable second reason for making talent get authorisation is to ensure they're not doing anything to wreck the WWE brand name. That I can understand. It doesn't mean the company's entitled to a share of the profits though.

The cases of Phoenix and Kharma are different. I think both needed to be away from wrestling for a bit. 'The Glamazon' has been wrestling for a long time and says she wants to do other things with her life. I believe she means that but I think if WWE had offered her substantially more money they could have convinced her to stay for a year or two more.

The only lady I don't think WWE could have kept around (nor do I think they should have tried) is the former Awesome Kong. She needed to go away for a bit.

It's still unknown whether any other ladies will follow the Bellas back to WWE. As Phoenix has had a taste of being off the road I think she'll be a difficult acquisition. Kharma may be easier. She's had some time away and is still capable of leaving her mark on the WWE Divas scene. I'm sure that's something she'd like to do. It's why she signed in the first place.

Kelly Kelly and Maryse returns are entirely dependent on WWE's negotiating skills. As I mentioned above I think the promotion would be well advised to be a little flexible with regards to outside projects and name ownership. They'll still be making money from the merch sales the ladies attract.

The situation WWE currently find themselves in is entirely of their own making. They should either be more willing to grant a little freedom to employees or they should have called up some new Divas a year ago while they still had the established names available.

The promotion is doing the smartest thing it can in these circumstances. Trying to bring back former stars is a good move. It could give the division a boost and give champion Kaitlyn some credible challengers. It will only be deemed a success if the returning starlets help to establish a new batch of women. The likes of Paige, Sunmer Rae and Sasha Banks should all be called up to share screen time with the more famous women. Scripting meaningful feuds and giving the newcomers wins is the best way to ensure this situation doesn't arise again.
Posted by Dave at 20:25