If tonight’s RAW was truly going to be old school it would be two hours in length. Something tells me that won’t be happening.


There were rumours last week that this week’s show was being considered a “filler” episode by WWE management. I don’t think any episode of RAW is ever considered filler (not by those in charge anyway). I do think some have more work put into them, and become more memorable, than others. This instalment is likely to be less memorable than others.


WWE are still five weeks from WrestleMania XXIX. After tonight’s RAW there will be four left before this year’s ‘Showcase of the Immortals’. Four weeks is plenty of time to keep the established programmes building and start constructing something that resembles a compelling undercard. There’s no need for this RAW to be especially stacked with big revelations and twists. Not that I’m expecting many of those between now and ‘Mania. The show is still just a bit too far away.


Rolling out the old school theme is a nice way of holding off the serious ‘Mania building for a little longer. It allows for a quirky approach to what is likely to be much the same product as we get every other week. Adding a bit of Mean Gene Okerlund and some random “legend” appearances at least changes the pace. I’d quite like to see the New Age Outlaws v Rhodes Scholars match that’s been happening on house shows lately. 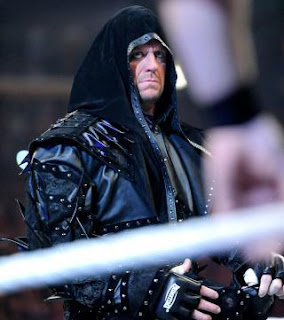 Get this guy back on TV
That said I do think WWE would be wise to reintroduce the Undertaker to television this week. If he wrestles CM Punk at WrestleMania the match will be one of the two biggest attractions on the card in the minds of most fans (alongside what I’m sure will be a riveting return performance from John Cena and The Rock). It will almost certainly be the best match on the show. It needs time to grow as a feud, meaning ‘The Dead Man’ needs to be back on TV sooner rather than later.


The Undertaker will not return to TV and challenge (or accept a challenge from) Punk on the same episode of RAW, not unless WWE are planning to change their standard pacing practices. The return will happen one week and the challenge will be extended the next. It’s possible it won’t be accepted until a third episode, but that may be pushing things a bit.


The point here is that if Undertaker doesn’t return until the March 11th RAW a match between he and Punk is unlikely to be confirmed until March 18th at the earliest. While it’s true that most fans will (correctly) assume the match is on as soon as the two men interact with one another WWE won’t be able to market the match until it’s announced. Three weeks seems to be pushing it just a little too much.
Posted by Dave at 19:42