We're three weeks away from WrestleMania XXIX and a man many thought would be featured in a key, or at least purposeful, match currently has nothing to do. I'm talking, of course, about Chris Jericho.

When he returned at the Royal Rumble Jericho got one of the loudest roars of the night. Fans went wild for the guy. The opening two minutes saw Jericho clash with Dolph Ziggler in one of hottest portions of the match and the show. Once a few more names were added it became clear that 'The Highlight of the Night' had in part been installed to hold the match together. He did so and did so well. He entered a charismatic, commanding performance. A meaningful programme for the following months seemed inevitable.

The following evening on RAW 'Y2J' briefly flirted with resuming his programme with Ziggler full time. It wasn't to be. By the time Elimination Chamber rolled around three weeks later Jericho had been entered into the titular cage bout while 'The Show Off' had been left off the announced card altogether (he ended up having a random match with Kofi Kingston). We're going to have to carry on waiting for the resumption of that rivalry.

Since the Chamber PPV Jericho has done nothing that gives a clear hint of what he'll be doing at WrestleMania, which makes me think nothing's been finalised for him yet (which seems to be the case for a lot of guys). A three-way feud between Jericho, Miz and Intercontinental champ Wade Barrett was teased but for reasons known only to WWE that match has been announced for this evening's edition of RAW.

It's possible the RAW match will end in a DQ or no contest in order to set up a rematch at WrestleMania. If so it's a strange way of booking things: having the match advertised for RAW and then transplanted to the pay-per-view makes it clear that it's a RAW level outing. It's also traditional for three-way feuds to feature various singles and tag team matches before a triple threat is booked. 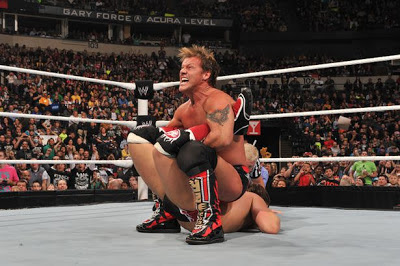 Nobody needs to see this guy with the IC belt again

Personally is rather see Jericho do something else and have Barrett and 'The Awesome One' continue in a singles feud. The three-way alternative would feature an outnumbered heel (never a good thing) and potentially awkward styles clashes with each of the three trying to provide slick triple threat exchanges. Should Jericho have one of his famed calamitous off nights it could be a disaster.

A few weeks ago I went so far as to write an article listing all the things Jericho could be used for between January and April (read it here). It seems what was an obvious wealth of possibilities for me was a generic signing to WWE's writing team. I'm surprised by this. You'd think WWE would plan something worthwhile for a guy of Jericho's talent.


It's not that his televised matches since he returned haven't been worthwhile, it's that with no clear purpose 'Y2J' is just another guy treading water. I'm not advocating a world title match or Streak challenge for him, but I do think he should be doing something with some merit or a plan behind it. The rumours of a Jericho versus Fandango match are emphatically not what I have in mind.
Posted by Dave at 20:01