Tonight’s Lockdown pay-per-view is a peculiar point in TNA’s history. It’s their first supershow since January and will mark as the final one until June. This is all a part of the promotion’s move to shed themselves of the well-worn twelve PPVs a year format. The bigger news is that they’ve made the decision to begin with: Lockdown will always be a the footnote as the first show after a month being skipped but that’s minor in the grand scheme of things.


A far more important point is the contract status of Bobby Roode.


‘The It Factor’ hasn’t been on IMPACT much over the last few weeks. It’s also been revealed that he’s been absent from this weekend’s TNA-themed festivities (put on by TNA themselves, natch) in San Antonio (host city of Lockdown). Roode’s contract expired several weeks ago and it’s clear he’s not signed a new one.


It’s a typical TNA situation. They’ve pushed the guy to the top and he’s proven himself to be a reliable headline talent. Re-signing him should have been (and still should be) an absolute priority for the group. Roode has been a massive success story for the league, proof that hard work can be rewarded with a prime slot. His story could be used to convince others to re-sign or join the company to begin with. Losing him to WWE, which is a very real possibility looking at recent signings by the sports entertainment outfit, would be a tough blow for TNA.


On another level it seems stupid and amateurish to allow someone’s contract to expire while they’re recognised as a champion. Why put a belt on a guy who’s working without a contract or whose contract is about to expire? 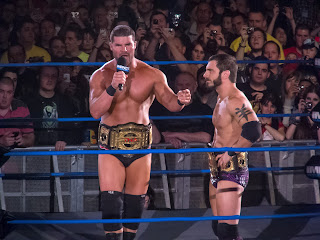 Will the tag champs be reunited at Lockdown?
Hopefully TNA can work something out with Roode so that he appears as scheduled at Lockdown. Losing him would be harmful to their product and their image. If he were to leave I wouldn’t be surprised to see him on NXT within a couple of months.


Could all of these facts be linked? Very possibly.


Going into the event Ray is a good guy. It’s very easy to envisage him revealing before or during the bout that he has secretly been the man orchestrating the Aces gang’s antics all along. It would set up programmes for him with Hogan (who we’re told wants to make another one of his many comebacks to the ring this year) and Sting (who has vouched for him several times over the last six months) and reunite him with his former Team 3D/Dudley Boys partner. It would also establish him as the promotion’s chief heel, a role he seems well equipped to play, and kick off what would surely be a boring story about Brooke Hogan choosing between her kayfabe husband and her real life father.


I’d like to believe TNA will resist the urge to have Ray affiliate himself with A&E. Not only is it a predictable swerve turn but it would also waste a guy who’s become a surprising hit as a top line face. ‘Calfzilla’ has taken to the role of good guy very well after his extended run on the dark side. He may be very good as a villain, and the group may be short of a clear lead heel, but the temptation to put Ray into that role should be resisted. Have him stay a face while there are fresh things for him to do and concentrate on building someone else up for a run as a top


A more interesting swerve turn, but not one I’d particularly recommend, would be Brooke revealing herself as a power player in Aces and Eights. There’s no logical reason for this to happen but it would keep Brooke prominent, which seems to be a priority for TNA. It could be interesting for a week or two but the entire Aces story is old hat now. They should do whatever swerve turn they’ve got planned and begin wrapping the plot up. 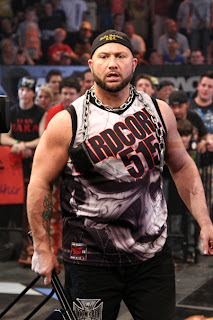 Next world champ?
Whether or not Ray will walk out as TNA champ is anyone’s guess. He’s well placed to dethrone Hardy, especially if the ill-advised heel turn ends up going ahead as he could then go into potentially big defences against ‘The Hulkster’ and ‘The Stinger’. Should he capture the gold and remain a face then there are considerably less intriguing defences to be made against the likes of Devon and Mr Anderson, as well as Austin Aries and Bobby Roode (if he sticks around). Putting Chris Daniels back into the challenger role would be a shrewd move too.


Ray is one of the few guys in TNA that comes across as a genuine threat to the reign of ‘The Charismatic Enigma’. I think the match will be very good. As far as a winner goes I’m torn, which is how wrestling should be. I’d like a Ray title win though. He’s worked hard to get to the top and I think he’s an asset to the company. I’ll be rooting for him.
Posted by Dave at 14:25