The State of WWE: The Heel-Face Divide

Consider this a third part of the sort-of series I've done over the last two days regarding how WWE books their product. It will probably help if you've read them (check them here and here). I'm not intending to refer to specific stuff from them. It’s the general theme that will carry over.

Today's subject is, as you may have guessed from the title, the booking of heels and faces in modern wrestling (specifically WWE). Twenty five years ago a wrestler could devise a character or gimmick and be practically certain of what sort of reaction they'd get from fans. The latter half of the nineties changed that. First the nWo introduced the world of wrestling to the cool heel fad. Then 'Stone Cold' Steve Austin became the hottest thing since ever doing things that would traditionally would have been considered heelish but with such charismatic glee that fans backed him.

The Attitude Era is packed with examples of faces taking on heelish attributes. The Rock is the most obvious additional example, although once he became a force of good following his bad guy run in the Corporation his heelish traits were not as overt as the likes of Austin and D-Generation X. 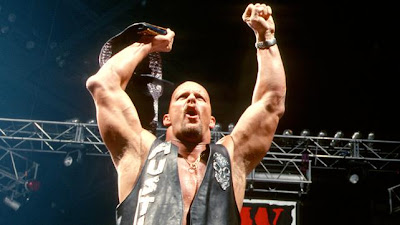 It cut both ways. Kurt Angle was introduced as a clean cut American hero, draped in the red, white and blue of the nation’s flag and appearing in vignettes talking about being a national treasure. It was the sort of character that would have been adored a decade earlier. By 1999 fans saw this sort of act as dated and booed 'The Olympic Hero'. That was, of course, the response WWE desired. Angle had been introduced in that fashion to turn audiences against him.

Basically the nineties blurred the lines as to what made a heel and what made a face. The language of television changed and took wrestling it.

WWE spent a significant portion of the last decade seemingly trying to reverse this. They recreated the Four Horsemen, Angle became more generic as a heel but über-patriotic as a face, and feuds settled down into rhythmic exchanges of good versus bad, something the Fed had moved away from during the late nineties. It was an exercise in futility. But then so was a lot of WWE's output from that time.

What's noteworthy is that on the December 15th 1997 episode of Monday Night RAW Vince McMahon opened the broadcast with a segment referred to on-screen as “the cure for the common show”. In that he announced to viewers that the promotion was going to begin moving in a new direction, heading away from good versus evil battles and offering characters with their own sets of morals to provide unique and interesting stories. Some of McMahon's comments were obviously digs at opponent WCW although the entire exercise was a retaliatory manoeuvre in the first place (because WCW had been hammering the Fed in the ratings).

That announcement was a signal to viewers that things were changing with the WWF product. Those changes to Austin and the various other morally grey personas of the era, freshened up the product and created a wealth of booking opportuities. Each guy, no matter their standing or spot, was distinguishable from his peers, having characteristics completely his (or her) own.

That's a far cry from where WWE was three years ago, a little over a decade after Vince’s speech was made. Every non-headline heel on the roster sounded and acted the same. They would hold the audience in contempt, cheat to win matches, and back down from fights. Meanwhile the babyfaces loved the fans, upheld the rules, and would routinely challenge whatever bad guy they were feuding with to square off outside of sanctioned matches "like men".

Okay, fair enough these are good basics to adhere to. It's difficult to imagine a babyface who insults fans for example (although Eddie Guerrero did pretty well for himself breaking rules). But these attributes don't add up to make a personality and they certainly don't create compelling television when they're the only things on offer.

What wrestling fans want are characters with their own opinions and ways of doing things. CM Punk turned heel last year but still received scattered cheers because people recognised that he was staying true to his overall character. All ‘The Second City Saint’ has ever cared about has been the WWE championship. When he went heel his approach to promos changed, as did the people he feuded with, but he was still adhering to the same set of goals he always had.


Another surprisingly good example in recent times has Big Show. Since aligning himself with John Laurinaitis and officially going bad last summer Show has been booked according to a set of principles whilst at the same time flirting with becoming a babyface again. The obvious example was his union with Randy Orton and Sheamus to combat The Shield. It felt a little strange but it could be accepted because he didn’t become a completely different character.


Look at a company like Ring of Honor. They routinely book face versus face battles and occasionally even go in for heel versus heel battles. They’re comfortable with doing so because they trust their audience to pick a favourite and back them, which creates a pretty interesting dynamic when bigger name matches occur.


They’ve also moved away from having everyone have a defining moment for a heel or face turn. At the end of last year Roderick Strong was most definitely a heel. Over the course of the year so far he has stayed playing the same character but has heard a growing number of cheers during his matches. ROH haven’t responded by putting him in an angle to say he is definitively a face again, they’ve simply booked him against a wider variety of guys and Strong himself has reacted to audiences in a less antagonistic manner.


Characters on non-wrestling TV shows are rarely black and white. People want more from television than that in this day and age. It no longer works to present someone as a good guy with no foibles anymore, especially when the likelihood is that they’ve played a reprehensible charlatan at some point in the not too distant past. Moral absolutes are not interesting to watch. Characters with moral grey areas should be embraced by wrestling as they have been with other types of television.


The way forward regarding wrestling personas is to let wrestlers develop something themselves. They’ll not only feel more comfortable but they’ll also be able to rationalise face and heel turns more easily when they have to perform them. The key is not to say that someone’s a good guy and then expect the audience to cheer them, it’s to present a character and see how the audience responds. Book them accordingly from there.
Posted by Dave at 20:43