A significant number of fans have been clamouring for the return of 'The Texas Rattlesnake' for years. His most recent match took place in 2003 at WrestleMania XIX. On that show 'The Great One' finally beat his greatest rival on the biggest stage WWE has to offer. The next evening on RAW Eric Bischoff announced that Austin could no longer compete because of neck problems (which had been a problem for Austin for years by that point). Just like that one of the greatest wrestlers ever retired. He went on to work as an authority figure on RAW before moving on to acting and presenting.


The thing about an Austin return is that the man doesn't need it. He went out on top. He had a spectacular match with one of his greatest opponents at WWE's flagship event. Only Edge, who won his last match and retired as the World Heavyweight champion, can boast a better send off. Austin's 'Mania XIX outing was on par with the retirement match of Shawn Michaels and the official retirement bout of Ric Flair.


'Stone Cold' looks as good as ever and always says in interviews that he feels better than he did when wrestling. I'm sure if he wanted to Austin could work a final match.


But why would he want to? Having returned from numerous lengthy layoffs throughout his career Austin knows as well as anyone that it can take time to shake off ring rust. He may be in great condition but he's also nearing fifty. Would Austin really want to jeopardise his health and his legacy by having one last match? I can't see it. The danger that the match could be a disappointment is probably enough to dissuade Austin. He took great pride in his work when he was an active wrestler. That trait wouldn't have changed. 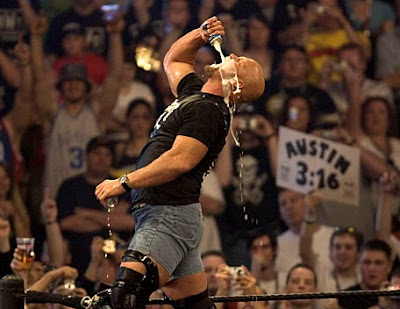 A return seems unlikely, and that's the bottom line...
The difference between Austin and The Rock, because the parallels are obvious and people are bound to point out Rocky made a comeback, is that Rock is a huge movie star. It was probably just as much WWE reaching out to Rock wanting mainstream appeal as much as it was Rock wanting to cap off his wrestling career in a suitably meaningful fashion. Prior to tagging with and then facing Cena 'The Brahma Bull's' most recent outing had been a handicap match tagging with Mick Foley against Evolution. A star of Rock's standing deserved a better final match and he knew it (although the guy's such a class act he'd never acknowledge it). Austin, as mentioned, was not in that position.


"But what about a dream match with CM Punk?" you cry. What about it? Yes, Punk would be the obvious choice to pit Austin against if he wrestled again, just as Cena was Rock's obvious foe. The promos the two could have against one another could be magical, some of the best the business has ever seen.


This doesn't change anything. Austin's not in the position of a Hogan or Flair, forced to keep trotting himself out in front of increasingly apathetic audiences, suffering from the law of diminishing returns. Austin v Punk being a dream match doesn't change anything. There are plenty of dream matches we've never seen and never will see. Austin v Punk, at this point, looks destined to join that list.


The same goes for Austin v Lesnar, Austin v Ryback and Austin challenging The Streak. These are matches that Austin simply doesn’t need to participate in. He went out on top and has made a very healthy post-wrestling career.


Austin's fans (and I'm one of them) should forget about him returning to the ring and concentrate on the body of work he left behind. 'The Bionic Redneck' was, by anyone's standards, one of the biggest names ever in WWE or wrestling in general. I don't need a comeback to remember how good he was. And I’ve no desire to see him risking a subpar performance which would tarnish his career.
Posted by Dave at 06:32