The Beginning of the End?

On Wednesday 3rd July TNA announced the release of five wrestlers. They were, in no particular order, Joey Ryan, Crimson, Taeler Hendrix, Christian York and Madison Rayne. Hendrix and Ryan have indicated that they either requested releases or allowed their contracts to expire without seeking new deals.


There have also been some interesting rumours circulating. First, that the WWE Hall of Fame building is going to be built at or near Universal Studios in Orlando. Second, that Sting is interested in a move to WWE, like really interested and he seriously means it this time so don't you doubt him thank you so very much.
For the purposes of this post I'm not interested in the prospect of Sting joining WWE. I'm more interested in what the rumour, if true, indicates about TNA's current financial affairs. Obviously it's not a positive sign. 'The Stinger' has been the only major name of yesteryear who has continually backed TNA and attempted to use his (diminishing) star power to help them compete with WWE. It hasn't worked but it's the thought that counts.


If Sting is considering a move there will likely be several factors at play. Age is one. Now in his mid-fifties Sting must realise he's going to have to finish his career soon. He, like every other major wrestling name, would almost certainly love to do so in WWE, where he'd also benefit creatively by having a roster full of fresh opponents.


It also hints at TNA not being able to afford him and encouraging him to make the jump. The reason Crimson and company (there's a kids' TV show waiting to happen) have been let go is apparently part of a drive to streamline the roster and save cash. That in turn is said to be linked to the extra costs TNA's been racking up since they started taping Impact from different locations and putting on more house shows.


Paying Sting to work only a handful of an increasing number of events wouldn't make sense. TNA has clearly been in a position where they need to save money for some time. Encouraging Sting to move on would be an efficient way of doing just that.


The five confirmed releases (Sting leaving is still a rumour remember) further illustrates that TNA is in trouble. Most companies when planning an expanded schedule would seek more talent in order to not overwork their existing roster. Releasing those guys and girls isn't a good move. They may not be draws (Christian York) or even especially wonderful wrestlers (Crimson) but they fill out the roster and perform a clear function as mid-carders and-or enhancers for bigger names (or at least they would have done if they’d been on TV).


The ones who should have been released are Hulk Hogan and Eric Bischoff, who perform no clear function on-screen and have demonstrated during their three and a half years with the league that they don't have any idea how to make it successful, either creatively or financially. I'm as bored of writing that as you are of reading it. They've dodged a bullet again.


This is, of course, terribly bad news for those who have been released. They've lost regular sources of income. In Joey Ryan's case, and to a lesser extent Christian York's, regular televisual exposure has been lost too. That's important to wrestlers who rely on secondary indy bookings to keep their incomes healthy. 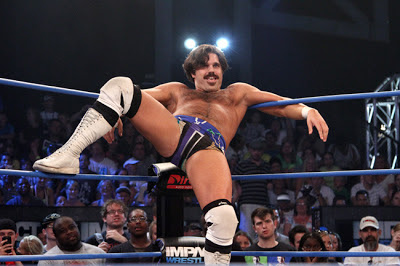 Why did they release this guy...?


On the plus side Crimson seems like the sort of guy who might get picked up for NXT. Ryan could wind up there too, but ROH and assorted indies seem like a safer bet for him. York will probably return to whatever he did for money before TNA plucked him from wrestling obscurity. Taeler Hendrix will similarly saunter back to the women's indy leagues. And Madison Rayne is engaged with a baby on the way. Her release is a bit of a low blow, but it's understandable to an extent coming as it does from a company that's strapped for cash.


Meanwhile the news that WWE's Hall of Fame might be built at Universal Studios, TNA's home since June 2004, is very interesting. If true it could mean that WWE has indirectly killed TNA by forcing them to spend more money than they can afford on touring Impact around the country. It could either be a big coincidence or an incredibly calculated move to finally put an end to TNA. Conspiracy theorists will favour the latter but why would WWE go to such elaborate bother if their goal was the obliteration of TNA? It would be far more straightforward to offer wrestlers large sums of money whenever they became available.


The alleged Hall of Fame construction site would be much like Vince's territory invasions of the eighties. Only this time a little more literal.


Any feelings that TNA's about to immediately go under can be quelled, for now, by the re-signing of Taz. If TNA was about to go under then securing the services of a spectacularly average colour commentator would not be top of their list of priorities. That they’ve just re-signed him indicates they feel they’ve got a future beyond the next few weeks. The company's in very real trouble, but they're not on their last legs yet.
Posted by Dave at 20:49