Two years ago The Miz was one of WWE’s top heels. At that point he’d been a bad guy for five years, most of that time spent in a reasonably prominent position on the card. Coupled with the strong push to the top he’d received as the winner of a Money in the Bank briefcase in 2010 and the promotion’s distinct lack of decent headline talent this led to ‘The Awesome One’s’ popularity getting a serious boost.


Miz’s selection of catchphrases helped him too. Wrestling fans are usually partial to a promo they can contribute to. It’s a large part of what initially made The Rock such a success.


Had the “Miz is awesome!” chants persuaded WWE to make the man in question a babyface in the summer of 2011 the apathy he’s generally greeted with these days would be understandable. Fans would have grown bored with his act across two years and would be desirous of the bad guy again.


As it is the apathy is understandable for a completely different reason. Miz’s jump to the forces of good was postponed too long. When it finally rolled around last November (in particularly underwhelming fashion) he was no longer the hot heel act crowds were desperate to cheer for. He was instead a man who’d lost momentum and slipped down the card.


The optimum time for the Miz face turn had been and gone. By November 2012 ‘The Most Must-See WWE Superstar’ was of little consequence no matter which side of the heel-face divide he was on. Heel to face turns work best when crowds want to see it. That tends to happen after a heel has been booked at the top for a while, either dominating everyone placed in front of them or displaying such confidence as to encourage support. Waiting too long just creates a missed opportunity. 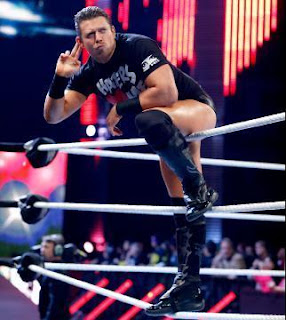 The Miz listening to a pin drop during his entrance
In a way Miz is a victim of the megastar push CM Punk received in the second half of 2011. ‘The Second City Saint’s’ famous worked shoot promo came at a time that would have been ideal for a Miz face turn. Switching two main event heels at the same time would have been a poor move. Miz had to wait because Punk was deemed to have a better chance at cracking the big time (and in fairness, that’s turned out to have been a shrewd move). It’s that more than anything else that caused Miz’s face turn to be postponed, and so it’s that which caused Miz’s popularity to cool off.


This is not to say that The Miz is wasted in his current role. I think he’s well suited to playing a middle of the card good guy. He can be depended on for satisfactory, TV-quality matches and has been around long enough for crowds to rally behind.


A heel turn is not the answer to the tepid reactions Miz gets these days. People just need to lower their expectations of what Miz can achieve in his current spot. With CM Punk, John Cena, Dolph Ziggler, Rob Van Dam and a host of others above him in the pecking order it’s natural for audiences to be less into him. Audiences have a lot of choice for whom to support.


The answer would be to give Miz more to do. But right now there is nothing for him to do. He is, as I’ve said, fine where he is. He had his try at the top of the card and it didn’t work out. He could be put back on top in an emergency but ultimately I think Miz’s place is in the upper mid-card. And for an upper mid-carder his reactions are perfectly adequate.


Had he been turned while he was still floating around near the main event maybe he’d have been able to do enough to stay there. We’ll never know for sure though.
Posted by Dave at 11:33