Monday's RAW saw Vickie Guerrero fired from her job as interim RAW General Manager1. She was consoled backstage by two men. The first was Vince McMahon. The second was The Ryback. Vince told her he’d make things right. 'Big Hungry' told her that she deserved better.


It's possible that McMahon and Ryback aligning themselves with poor, downtrodden Señorita Guerrero could be some deft foreshadowing of planned programming. Or I could just be reading too much into things. Read on and judge for yourselves.


Ryback's consoling of Vickie could lead to him taking her on as his manager (a lot of people seem to be thinking this and it’s difficult to imagine her doing anything else right now). Hopefully that would involve less romantic subtext than Vickie enjoyed with her previous client, Dolph Ziggler. The Ryback and Vickie combo (RyKie? VickBack?) could be built up throughout the autumn, enjoying the support of a heel Vince while also seeing heir apparent Triple H taking a keen interest in their dealings.


Vince's motive? He sees dollar signs when he looks at Ryback's muscles. You don't need anything more than that because it's utterly believable and in-character for Vince. Triple H's motive? He dislikes Vickie professionally because of the allegedly shoddy job she did as GM. 'The Game' could take an interest in overturning decisions that benefit 'back in order to mess with Guerrero.


Don't worry about Brad Maddox's role as the new RAW General Manager. His character is one that would be easily intimidated by Ryback, Vince and Tripper (Vickie too, for that matter). He could be scripted to go along with any plot development with ease. He’d just need to comply with whoever was in the room with him at any given time.


Outside of their interactions with Ryback and Vickie, Vince and Tripper would continue their current head butting over the direction of WWE and the storyline of who's in charge on-screen. It would be clear that their differing views on The Ryback would be part of their larger power struggle. Vince and Triple H are regulars on TV now. That wouldn't necessarily need to remain the case. They could appear once every few weeks to remind us that there's trouble between them as well as where they stand on the thorny issue of The Ryback as a concept. 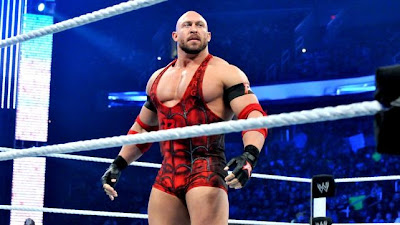 A future foe of Triple H?
Ryback and Vickie could spend their time between now and the end of the year being built up as a winning combo. That's something that 'The Human Wrecking Ball' needs anyway2. Come the Royal Rumble Ryback should be presented as a favourite to win and only find himself eliminated via some form of shenanigans, giving him a legitimate reason to complain about being cheated afterwards.


At this point 'The King of Kings' could take issue with 'back's bellyaching and the steely dislike between the two could erupt into a full-on feud. The problems between McMahon and Helmsley should be ready to come to a head by this point too. Vince, as full of machismo as ever, would challenge his son-in-law to a match at WrestleMania. Trips would naturally decline.


Give it a few weeks of Vince trying to push Triple H's buttons and get his match before the two execs would end an episode of RAW in the ring together. Some harsh words would be spoken and 'The Game' would finally appear ready to strike Vince. But he wouldn't. Because Ryback would come charging down the ramp or through the crowd to make the save and give 'The Cerebral Assassin' a pasting.


That would set up Triple H v Ryback for WrestleMania, with Vince and Vickie Guerrero at ringside. Throw in a Winner Is Totes In Charges No Takesies-Backsies stipulation and I think that could be a pretty enjoyable addition to the thirtieth 'Mania card. Give it about six months and we'll find out if I'm anywhere close to right.


1 It's hard to see why: she's done no worse than any other GM in the show's history. In fact as far as kayfabe accomplishments go Vickie did pretty well. Maybe she should have kept her fictional job. But this is neither here nor there.