Of course there is a third option.


I’m talking, of course, about how I’d book Jay Briscoe losing the ROH world championship. While I think Michael Elgin is the ideal man to replace Jay as the long term champion I’m also of the opinion that he’d be well served by having a heel champion to chase and defeat for the gold. While having him replace Jay as the champion, either by beating him directly or winning a tournament, would cast the right man as the champ it would also deny Elgin and fans a feud with a solid culmination.


So… the third idea. Assuming Mike Bennett could be confirmed to appear on shows up to and including, say, Manhattan Mayhem V, I think he’d make a very good interim heel champion. He may not be the best wrestler in the company but the knowledge that he’s been negotiating with WWE should ensure he’d be hated by fans upon winning the belt.


Yes, it’s a rerun of the CM Punk title reign. But so was Tyler Black’s final storyline and I thought that was pretty enjoyable.


If I were booking ROH with ‘The Prodigy’ confirmed for every show until Death Before Dishonor XI and access to Jay Briscoe I’d announce Kevin Steen as the challenger for the July 12th show in Milwaukee. It would also be made clear that that would be Jay’s final night in the promotion. It would be an all or nothing situation for ‘Mr Wrestling’.


Steen would lose clean to multiple Jay Drillers and shake hands with Jay after the match. Jay would then begin a promo about his time in Ring of Honor and moving on in his career alongside his brother. This would be interrupted by Mike Bennett. ‘The Prodigy’ would tell Briscoe he’s had some impressive title defences but Jay won’t have proven he’s beaten him.


Bennett would challenge Briscoe to make his final championship defence against him. Nigel McGuinness, at ringside for commentary, would tell Jay the decision’s his, but he’s happy to let him leave as champion and put a tournament together. Jay would say that he’s going to be best remembered by ROH fans for having some wild fights. He’d tell Bennett no to a match but yes to a fight.


The challenge would be accepted but before the bell Bennett would kick Jay with a low blow and then follow up with knee drops and a headbutt to the groin. The referee in the ring (probably Todd Sinclair) would pull Bennett off and check on Jay, with Jay very clearly still wanting the match to go ahead. Sinclair would reluctantly call for the bell and Bennett would pull the champ up and perform the Box Office Smash tice before pinning him to become the champion. 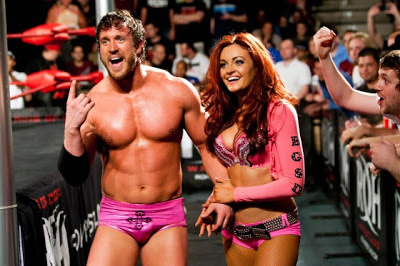 A potential ROH champion
Bennett would be handed the title belt by Carey Silkin (because that’s The Tradition™) and leave before Jay could get up. The show would be released on VOD and DVD as Battle of the Superstars. Because Bennett wrestles like a WWE Superstar™ and Briscoe would be heading off to become one.


The next evening in Dearborn Bennett would have a victory celebration. You know the sort of segment this would be: Team Sexy would gloat about having the gold before getting interrupted by a babyface. In this case it would be Nigel McGuinness standing up at commentary to tell Bennett who he’d be defending the title against.


Those defences would be Jay Lethal on July 27th in Providence, Michael Elgin on August 3rd in Toronto, and Roderick Strong at Manhattan Mayhem V.


Bennett would defeat ‘Black Machismo’ cleanly. He’d just manage to squeak passed Elgin, resorting to cheating and shenanigans to defeat him. After that the two would have a confrontation on television and Bennett would cost Elgin a televised bout. Elgin would be awarded a rematch for Death Before Dishonor XI.


Bennett would beat Strong in the main event of Manhattan Mayhem V after a distraction from Maria and a Box Office Smash. His feud with Elgin would continue on television, Bennett costing the number one contender matches and always just managing to get away. Their rivalry would end at DBD with Elgin winning the championship fair and square in the middle of the ring.
Posted by Dave at 20:35