I don’t think there’s anyone in wrestling who’s having as good a 2013 as Dolph Ziggler. From lasting almost fifty minutes in the Royal Rumble to cashing in the Money in the Bank briefcase the night after WrestleMania to being a part of the greatest double turn in sixteen years, he’s having a year packed with memorable moments.


Not even the loss of the World Heavyweight championship has hurt DZ’s momentum. He entered such a convincing performance and was booked so perfectly as the guy who wouldn’t give up that fans were even more into him after the loss than they were before. They empathised with him and wanted to see the unsportsmanlike Alberto Del Rio (and his smarmy sidekick Ricardo, who, when playing a heel, is comparable to Muttley of Dick Dastardly fame) get his comeuppance.


We’re being made to wait for that payback. Which is a smart move. Had Ziggler continually gotten the better of ADR then his status as the gutsy underdog, surely the best way for him to be portrayed now he’s a good guy, could have been jeopardized. ‘The Show Off’ is a guy who picks his spots. 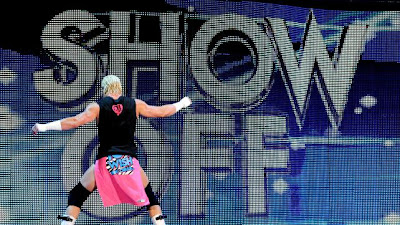 Whether you like it, or whether you don't...
I’d understand if some people questioned the decision to enter the ex-champion into a feud with 3MB. It’s not a natural follow up or placeholder feud for a guy who’s just lost his first proper world title. Something similar happened to The Miz when he lost the WWE championship (he worked a pay-per-view match with Alex ‘Plank of Wood’ Riley) and he’s in no danger of headlining a pay-per-view any time soon.


But I don’t question the move. The mini-feud with 3MB has been designed to encourage cheers for Ziggler and creating a reason for him not to constantly be attacking ADR. It’s achieved those goals. It was a short term thing and has already been consigned to the history books, along with Ziggler’s stint as Chavo Guerrero’s caddy and his penchant for cheerleader outfits.


It will take a lot for WWE to mess up Dolph’s popularity at the moment. That’s not to say they can’t or won’t, but that they’d almost have to actively try to do so. He’s what fans seem to want right now: someone who’s earned their way to the top, can cut a damn fine promo, and doesn’t wrestle like John Cena. As far as WWE goes, Dolph Ziggler really is the best thing going today.
Posted by Dave at 19:49