Just for fun, you ask, can you tell us how you'd deal with ROH's world title crisis? Ohhhhh, alright then...

I'll give two answers. The first will be how I’d deal with the crisis without any access to Jay Briscoe and working on the assumption that he's leaving for WWE without ever appear for ROH again. The second will be what I'd do if Jay appeared on the July 12th and 13th shows as he was originally advertised to, with those being his final appearances for the promotion.

So, without Jay I'd have Nigel McGuinness, Matchmaker, appear at the Milwaukee show on the 12th to make an official announcement. He would explain that Mark and Jay have left ROH for spots in NXT, which would probably get boos (I know I'm going to be frustrated if this is what they have to do for real). Michael Elgin, as the only man with a world title shot officially announced, would be considered the current champion via forfeit.

Elgin would come to the ring to interrupt this. A promo would be devised for him that would cover a few points. He'd be torn. On the one hand he's wanted to be the ROH champion for a long time but on the other he's always wanted to earn it in the ring by beating the best the promotion has to offer. He wouldn't want it handed to him but he also wouldn't want to see such a prestigious belt vacated.

This would bring out Adam Cole. He would inform Nigel that he'd accept the championship if Elgin had doubts about being able to carry himself as "the man". McGuinness would say no to that, adding that he respects Elgin's decision. McGuinness would announce a shakeup of the announced card in favour of the opening four matches of a two night tournament for the vacated belt.


This is a good point to address the status of the physical championship belt. Matt Hardy and Steve Corino apparently ran off with it at the end of June 23rd TV tapings. I imagine this was done to keep the pair relevant to storylines with SCUM out of the picture. I’d have McGuinness reintroduce the belt with an explanation that it was retrieved from Hardy by police and lawyers. ‘The Icon’ could be reintroduced alongside Corino in some other fashion.

The opening round matches of that tournament would be Davey Richards v BJ Whitmer, ACH v Roderick Strong, Eddie Edwards v Mike Bennett, and Jay Lethal v Michael Elgin. Richards, ACH, Bennett and Elgin would win, setting up Richards v ACH and Bennett v Elgin for the following evening. The finals would see Elgin beat either Richards or ACH (I’m not sure who would win their semi-final match) to become the new champion.


ACH would be good in the challenger role. Generally speaking I think it's too early for him to convince a crowd he's about to become champion, but people could be encouraged to believe he might win due to the unusual situation. An Elgin v ACH final could have a good atmosphere to it. Obviously the match would be at least decent. ACH seems incapable of anything less.


The alternative, Richards versus Elgin, would be the obvious route to take. Fans would be far more split on who would win that match. Both are realistic replacements for Jay. The match quality would be great too. Showdown in the Sun proved that. 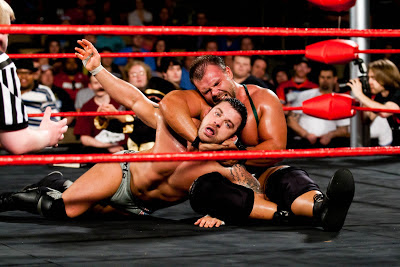 A potential tournament final
With access to Briscoe I think ROH could present two stirring matches and a great story across two shows. I'd have Briscoe’s final opponents announced as Michael Elgin and Adam Cole. They'd probably be announced on the website, along with an acknowledgement that the Briscoes have signed with WWE and that Mark's final ROH appearance had already been and gone.

As pointless as I find Jay's singles push I think Briscoe v Elgin could he a phenomenal match. Mainly because of Elgin. His excellent pacing ensures the closing moments of his matches are electric (not literally, that would be hideous). A five minute sequence stuffed with Jay Drillers, Elgin bombs, buckle bombs, crossfaces, and stomps could be, as they say, epic.

Elgin would win. Jay would raise his hand. The world would be happy.

Until Dearborn on the 13th at any rate. I'd have Adam Cole cut a promo about being denied his rightful title match (because he'd be scheduled for a match with Briscoe rather than the champ). Nigel would tell him he should be honoured to face a guy like Jay in Jay's final match. Cole would probably respond that he's not interested in honour, he's interested in the championship.

Elgin would wrestle a non-title match on the show. Cole and Briscoe would go on last. The event’s name would be chosen as something appropriate for hosting Jay’s final bout.

I like the idea of Cole v Briscoe being a no DQ match. That would permit Jay to do all that brawling he loves and also allow interference from Matt Hardy and Steve Corino on behalf of 'The Panama City Playboy'. Elgin would make the save and, if possible, Mark Briscoe would make a surprise appearance too.

Jay would probably win. It would be a popular decision that would allow the Briscoes to go out as winners, which is what ROH fans seem to desire. A win for Cole would be better in the long run and would set him, Hardy and Corino up as a strong faction for the future but I don't think a heel win could be justified. It would dampen spirits a little too much.

Either scenario would have Elgin striding into the summer as the ROH champion. My dislike of multi-time ROH champions (because it's something the company has, Austin Aries aside, avoided promoting) means I wouldn't feel comfortable placing the title on Richards, Edwards, Steen or Strong, who are all wellsuited in principle to replace Jay as the leading man. In the case of Steen I think it's too early for him to regain the belt anyway. He only lost it in April (and I bet ROH are regretting putting it on Jay now).


Having the right mix of wrestling ability and intriguing character Elgin is the right choice to represent the company as the leading man for the foreseeable future. Given a long run he could become one of the biggest names associated with the title. He’s the ideal candidate and perhaps if Jay does leave he’ll finally get the world title reign he’s deserved for a long time.
Posted by Dave at 10:58