Protectors of the Faith

Over the last five months The Shield has been incredibly well handled. Part of the reason for this is that they haven't been overexposed. They’ve wrestled only a handful of matches since November, the rest of the air time they’ve had seeing them on run-in and beatdown duty. The approach has meant fans haven't become sick of seeing them and that it's special when they step into the ring.

Working almost exclusively with headliners (they've had a handful of brushes with comedy trio 3MB and a solitary outing against Zack Ryder, Justin Gabriel and Great Khali) has helped them too. Wrestling guys at the top if the card makes any newcomer look like a big star and a hot prospect. Beating those stars hasn’t hurt either. 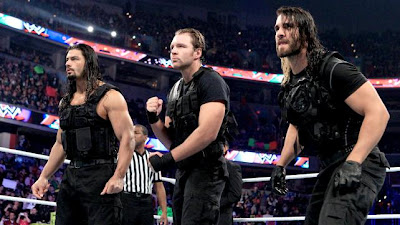 No taped fists for Reigns. He's a tough dude

To date The Shield has suffered just one loss: Dean Ambrose lost to the Undertaker on the April 29th SmackDown from London. Dean Ambrose lost but the fact that he was selected to be the first member of The Shield to have a solo outing demonstrates that WWE sees him as the guy with the most potential, or at least the most capable of the three right now. That he will wrestle Kane on this evening’s SmackDown indicates the same thing.

If this is the WWE Hive Mind's opinion then it's one I agree with. Rollins is technically sound in the ring but still doesn't really have the mic skills or those intangible qualities that allow a guy to establish himself as a headliner in WWE. Roman Reigns still has yet to do anything that will make me think he's anything more than average. He enjoys roaring and has a good look (featuring big muscles!). That's going to be enough to get him a shot at stardom as a solo act at some point because that’s how things are in WWE. At the moment the smart thing is being done: he’s working with more experienced guys and his weaknesses are being covered.

Ambrose goes out of his way to separate himself from his peers. Instead of snarling and scowling during his entrance as his buddies (and practically every other bad guy in the company) Ambrose has adopted other mannerisms. Flexing his hands, twitching his neck and bumping around during matches with almost Ziggler-esque abandon, Ambrose is clearly not a run of the mill talent. 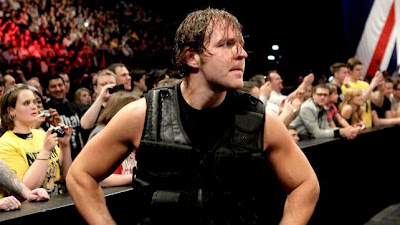 Star of the show


His promo delivery makes him stand out too. He has a good understanding of how to get across what is a fairly generic point in an engaging and interesting fashion. His inflections and delivery are pitched perfectly. His Heath Ledger Joker-like drawl hinting at a slightly unhinged man.

It seems likely that the three men are going to get a tag team title match against Team Hell No at some point. I expect they'll win, mainly because their push has been so strong and there's really very little else Kane and Bryan can do as a tandem without reverting to the challenger role and working as chasers.

I'm not going to advocate two specific members of The Shield holding the belts. What would be the point? The group would be best served by a return of the Freebird Rule (a ruling that allows a trio to reign as tag champs, with any two members of the three defending the gold on any given occasion). That approach would allow them all to notch up a title reign relatively early in their WWE careers and continue to share TV time with one another.

The Shield wouldn't be the only beneficiaries of a tag title win. The belts themselves could conceivably get a boost from the switch if 'The Hounds of Justice' continue working opposite established headliners.


Randy Orton and Sheamus could be reunited as challengers at Payback or Money in the Bank. Their loss could be what triggers that Orty heel turn seemingly everyone on the planet (from Lou Albano to Barack Obama) is gagging for. A win over 'The Celtic Vipers' would be good for Ambrose, Rollins and Reigns and show that the tag titles are still relevant.

Their win could even be used to turn the Prime Time Players into babyfaces. With Titus O'Neil given some time to talk I think they could work as good guys. Making them seem like credible threats could be The Shield's first challenge from management. If fans can be made to cheer the Players then it’s a job well done for the boys in black.

Their issue with 'The Dead Man' could resurface too. That's a feud that feels as though it should take in a pay-per-view. ‘The Dead Man’ still has fresh singles matches waiting against Reigns and Rollins for TV, and the Shield v Undertaker and Team Hell No (or Daniel Bryan and the Brothers of Destruction) match could be trotted out again on a PPV with a gimmick added to it. We could even see The Shield defend the titles against Kane and 'Taker. A win there would be a massive credibility boost for the flak jacket aficionados.


Sooner or later The Shield is going to split and each man will get a shot at singles stardom. Ambrose is my pick to gain the most success, although I imagine Reigns will get a chance to make it first. Rollins? He’s got the talent to make it to the top but in the current WWE era even average guys win the World Heavyweight title (I’m looking at you, fella).


It’s too early to be talking about their split though. For the foreseeable future The Shield are going to continue to work together. Hopefully they will continue to be one of WWE’s most well-handled acts and those in charge will pay attention to what’s worked with the group. Every guy form NXT should be as protected as Ambrose, Rollins and Reigns have been.
Posted by Dave at 20:47