On Monday's RAW a promo aired announcing the impending debut of the Wyatt Family. Anyone who's seen the trio's work in NXT will know that this is a good thing.

The leader of the pack (the term patriarch could, rarely for wrestling, be applied here) is Bray Wyatt. He made his WWE debut in 2010 on the ill-fated second series of NXT. This was back when NXT's format was radically different, of course. It wasn't really designed to get numerous guys over at once which in retrospect it should have been. The result was that he ended up not getting much to do.


Ignore the mask, he's wearing it here because he had a broken face
From NXT season two Wyatt, then going under the name Husky Harris, got a slot in CM Punk's Nexus faction. Yes, just like Curtis Axel (then billed as Michael McGillicutty). Perhaps someone in the WWE writing team has been poring over old footage of NXT and Punk’s New Nexus? That could explain why two guys who debuted in that period have been promoted in as many weeks.

Husky's initial run on RAW didn't last long. He was written off TV before Punk's showdown with Randy Orton at WrestleMania XXVIII. He eventually reappeared on some house shows under the new Bray Wyatt name and then became one of the early highlights of the 2012 reformat of NXT.

Various inspirations have been cited for the Wyatt character. For those who haven't seen him in action he's basically patterned after a stereotypical southern preacher in everything from the way he dresses to his cadences. His wrestling style is enjoyably wild, his big moves looking credible and being broken up with surprising bursts of agility.

An injury early in the summer put Wyatt on the sidelines for a few months. He was absent from TV for a while before making a comeback as a manager. It was an inspired move, granting time to one of the best characters on the show and allowing others to benefit from his excellent promo skills. The men he was given to manage were Luke Harper, formerly Brodie Lee in Dragon Gate USA, and Erick Rowan, who'd wrestled in Japan as Thorus before signing with WWE. The three look like they belong together, with Harper and Rowan being a particularly good fit as a team.

Rowan and Harper were entered into the tournament to crown NXT tag team champions. They made it to the finals but lost to Oliver Grey and Adrian Neville. That started a feud that could have been great but never really got going thanks to an injury to Grey. Said injury led to the Wyatt boys getting the belts at the May 2nd NXT tapings. 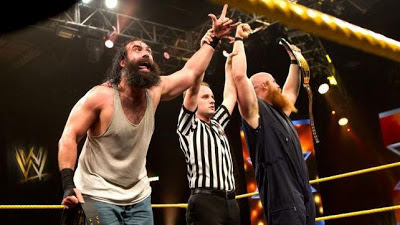 While it's clear that Bray is the star of the group thanks to his look and promo skills Harper and Rowan are deserving of promotions too. They could help to create a worthwhile tag team division if given the chance. Having Bray as a manager will help them to stand out.

There should be no need to rush things with the group. Bray is well suited to working as a manager and could gradually morph into a full time wrestler. The success of The Shield makes me think WWE has a plan in place for the group. I hope they do. Bray's too good to mishandle a second time.
Posted by Dave at 20:12