Jack Swagger is going to remain in orbit around WWE's World Heavyweight title until Extreme Rules. At that show he will clash with current champ Dolph Ziggler and former champ Alberto Del Rio.

A title win for 'The Real American' seems unlikely, mainly because of the court date that’s still hanging over his head. WWE aren't likely to put their second most important belt on someone who may bring them negative press. Just as unlikely will be Swagger remaining a part of the title picture after the extreme PPV. By the time Extreme Rules is out of the way Swagger and Colter will have been feuding with ADR for three months. It'll be time for both men to do something new. So says WWE's time tested booking practice.

For man of the people Del Rio that will likely be a continuation of the feud he's currently got going on with Ziggler. Dropping Swagger will provide just enough of a change to keep their programme interesting (in theory anyway).

Theoretically Del Rio could be ditched to allow for a Ziggler v Swagger programme. Realistically that's not happening. It would require one man to switch to playing face and necessitate a step down the card for Alberto, who only started getting the star treatment again in January. Also, Ziggler versus Swagger matches would not be the finest things known to man.

This is going to leave Swagger with nothing obvious to do come May 20th. Nothing with headline guys anyway, unless CM Punk returns to work with him. I can think of likelier scenarios.

What I'd like to see WWE do is drop Swagger down a level to help elevate someone from the lower ranks. The perfect choice is... wait for it... Zack Ryder. Okay, perfect may be stretching things a little but Ryder would be a good choice for a promotion.

'Long Island Iced Z' is already reasonably popular with fans. That makes moving him up a notch easier. He proved in his 2011 programme with Dolph Ziggler that he can get the crowd into a match if he's given more than two minutes to do so. He's underrated on interviews too. Most importantly (for the point I’m about to make anyway) Ryder is an American with a gimmick that reflects an aspect of American pop culture. Specifically, reality TV.

Since returning in February Swagger and his mouthpiece Uncle Zeb have claimed that America's society is broken. One aspect of this belief, illegal immigration, is what led to the programme between Swags and Del Rio. Ryder could be used as the embodiment of American failings, blamed by the heels for what's wrong with the country’s populace. 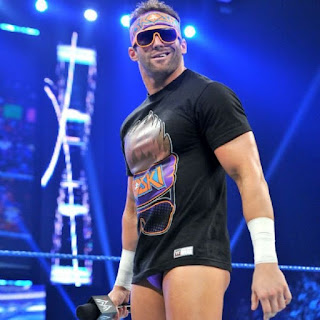 Is this what's wrong with America today?

Getting it right would be tricky. Fans haven't exactly reacted to Swagger like a main event star during his most recent push and ‘The Long Island Broski' has been on the bottom rung of the roster since dumping the US title (to Swagger, funnily enough) early last year.


The usual approach of weekly rushed segments paid off with a pay-per-view match nobody cares isn't going to suffice. Viewers need to be given reasons to root for Ryder and despise Swagger. That would mean giving each man time to get their points across in an engaging fashion. Ideally it would mean giving Ryder some wins before the programme begins too, so that he's taken more seriously as an opponent for a former world title contender (and indeed a former World champion), and so that the option is open to have 'The Real American' cost him matches to get the ball rolling.

WWE can do all of this but it's unlikely they will. Ryder isn't seen as important enough to be a part of a featured rivalry and Swags will probably go the same way once Del Rio's done with him. The idea is just completely alien to their current booking style. Which, when you get down to it, is pretty depressing.
Posted by Dave at 20:52