I'd been watching wrestling for about six months when I was first introduced to the King of the Ring concept. It was a sixteen person tournament (the number of participants varied each year depending on the strength of the roster) that pitted various mid-carders against one another in a series of matches. There was no overriding point to the series beyond signalling a push, which obviously wasn't the on-screen reason given but it amounted to the same thing. It was an unwritten rule by the late nineties that headliners were above King of the Ring.


That year the tournament was won by 'Bad Ass' Billy Gunn. He was not a shining example of what winning King of the Ring could do for a performer. Kurt Angle's win in 2000 was a better use of the gimmick, as were the victories of Edge and Brock Lesnar after that.


While there's not really anything for the wrestlers to win with King of the Ring besides a bragging right it was still a very useful idea and annual event. It would be slightly overdramatizing things to say that winning the tourney launched the careers of 'Stone Cold' Steve Austin, Triple H and Bret Hart but it did play an important part in each man's rise up the card. The same is true for Angle, Edge and Lesnar. Winning King of the Ring was a sign that each man was above their mid-card peers and destined for better things.


When WWE retired the tournament both as a pay-per-view and an annual occurrence in 2003 a lot of people thought it was a poor decision. While not everyone selected to make it to the finals and win had become a player for the group (joining 'Mr Ass' on that list are Mabel and Ken Shamrock) there were more successes than failures. It was a useful tool for raising wrestlers' profiles and WWE casually cancelled it, preferring instead to push their solo brand PPVs. 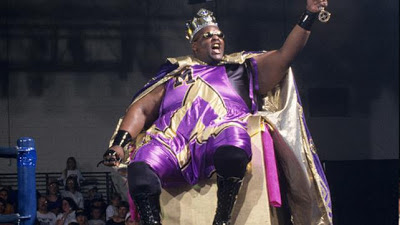 Yeah, this actually happened
The tournament made a low key return in 2006 as a tournament exclusively open to SmackDown wrestlers. It was won by Booker T, who changed his ring name to King Booker and became the brand’s top heel. It would become one of the best runs of his WWE career and was a perfect example of how the tournament could be used to build a new character (even if it did ignore the unwritten rule that only mid-carders got to win King of the Ring).


The gimmick returned on the April 21st 2008 episode of RAW. The finals came down to CM Punk and William Regal. They had a very good outing which ended with a surprising win for Regal. It failed to spark a career renaissance for the Brit. Two years later the gimmick was dusted off again, this time to give Sheamus a boost. That resulted in his bizarre run as King Sheamus that saw him dressing like Loki from The Avengers. 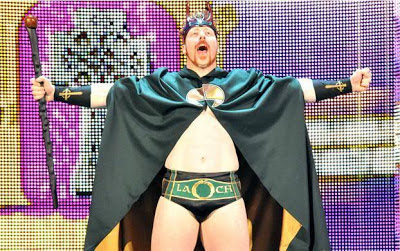 And so did this
The last time we saw a King of the Ring show was then. I think the event is due a proper, regular comeback. It's the ideal tool for launching new careers because it creates so many booking options. Anyone winning would be signalled as someone due for a shove up the ranks but even non-finalists could be elevated by a surprise win in preliminary rounds.


There are plenty of ways to utilise the tournament format. It could provide a solid month’s worth of programming for RAW. That shouldn’t be dismissed as the show is currently pretty aimless. You could have a heel dominate all the ay to the finals, only to be upset by a plucky, young babyface. It’s the sort of thing WWE were going for earlier in the year with Bo Dallas before they lost interest in him.


It could be used to start rivalries too. There would obviously be a favourite in every match, and it would be very simple to book one guy to score a surprise win over another. The problem of there being no actual point to the event could easily be remedied by granting the inner a title shot at SummerSlam. It could even replace Money in the Bank, of WWE were feeling daring.


The tournament would be something fresh for WWE programming and could be used to spark some new stories. That alone makes it worth considering.


Considering the size of the roster there's never been a better time to resurrect King of the Ring. The promotion needs to make new stars as well as flesh out TV with interesting and talented characters who aren't necessarily in the main event. They need something that can highlight multiple wrestlers at once and create some surprises that aren't just booked for the sake of being surprising. The King of the Ring is, as it always has been, the perfect tool for the job.
Posted by Dave at 12:23