The longer we wait the less likely the WWE Network seems to become.


They’ve experimented with creating new, not-entirely-wrestling-themed content for their YouTube channel over the last year or so and had a mixture of hits and misses. The Dolph Ziggler fronted Download was routinely excellent for example, while Foreign Exchange and Are You Serious? both had their moments too.


Like I say there were misses too. It’s generally considered that Zack Ryder’s show took hit a quality slump after being forcibly switched to WWE’s channel. You can’t win them all.


Anyway, I’ve been thinking recently that part of the reason for the holdup may be due to a lack of quality content ideas rather than just setup troubles. I’ve compiled a list of ideas below. WWE, you’re free to broadcast whatever you want.


Cooking with Ryback: Ryback bursts into the homes of unsuspecting contestants bellowing "Feed me more!" at the top of his voice and smashing furniture, not leaving until he has been appeased with a banquet served to him by the owners of the house. It should have the general air of a particularly bad segment from Noel's House Party, only stretched out for far longer.


You be the Judge: Friends and family members with long-standing disputes enter a mock courtroom and explain their grievances to Mick Foley (who's kitted out in judge's garb). 'The Hardcore Legend' then makes a ruling which all involved have signed legal documents to adhere to, shouting "That's hardcore, and now it's the law! Bang bang!" immediately after every proclamation. Videos are shown the following week recounting how those involved have found living according to Foley's ruling.


Greenwich Street: A learn-to-read and -count show in the style of Sesame Street, fronted by Triple H. The weekly number and letter are always three and H.


Spot the Difference: A series in which Jim Ross tries to tell the difference between any two people related to one another or who just look vaguely alike, stemming from his inability to tell Matt and Jeff Hardy apart. He never manages it.


T Time: Booker T reviews teas from around the world in his uniquely overblown play-by-play style, exhuming old catchphrases as he goes. Damien Sandow has a recurring role as a Voice of Reason.


Travels with Cena: John Cena visits various landmarks, cities and countries around the world and bellows "The champ is here!" into the camera. It is nothing but this for an hour.


Being The Chosen One: Documentary series following WWE's resident 'Chosen One' Drew McIntyre. Offering in-depth interviews in which Drew opens up about going from being one of the company's hottest rising stars to arguably the least interesting member of 3MB who has to watch his mediocre ex-wife enjoying a more high profile spot in TNA.


Perspex Appreciation TV: Jinder Mahal hosts a nightly show looking at the different kinds of Perspex and all its various uses. Each episode begins with him reverently placing his turban into his Perspex Box™. 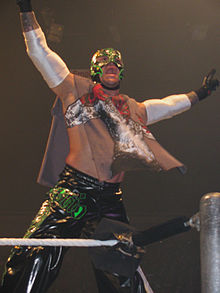 Give this guy his own Spanish language soap opera
Khali Karaoke: Three hours of non-stop singing from The Great Khali. This can include theme shows where he specialises in one artist or genre. I think we all want to hear Khali's rendition of Frank Sinatra’s My Way.


Stardust: Sitcom in which Dolph Ziggler and Goldust share a flat (or, as they’re American, an apartment) and both believe themselves to be Ziggy Stardust. Big E Langston has a recurring role as Biggy Stardust.


Titan Towers: Soap opera set in and around WWE's headquarters. The McMahon's would naturally feature prominently.


On the Sofa with Brodus: A late night chat show hosted by Brodus Clay. Sweet T, the Funkadactyls, and Brodus’s momma all feature as recurring characters.


Can Big Show Punch That?: A series in which viewers write in suggesting things for Big Show to punch. Big Show is then shown punching the objects, people, places or abstract concepts requested.


Otunga Law: Viewers tweet, Tout, email and write in with legal problems for celebrated lawyer, occasional wrestler and bodybuilding aficionado David Otunga. The former Nexus member dispenses advice with a wry smile and an occasional wink. He ends every episode with a prayer.