An Axe by Any Other Name

Curtis Axel. It's not the most awe inspiring name to ever be uttered in WWE. The man behind it has an impressive pedigree though, and there’s also a story for the moniker. He's the son of the massively talented ‘Mr Perfect’ Curt Hennig and the grandson of Larry 'The Axe' Hennig. Big shoes to fill there.


I like the new name. It's similar in origin to Rocky Maivia in that it combines the name of a father and grandfather. You're rarely going wrong in wrestling if you're following in the footsteps of The Rock. Perhaps just as importantly, Curtis Axel is an improvement on Michael McGillicutty. Young Joe Hennig was never going to get anywhere with that name.


You may remember him from a brief stint in CM Punk's ill-fated Nexus. Or perhaps from his appearances on the various incarnations of NXT. Don't worry if you don't though. While he was technically sound as McGillicutty during those periods he didn't really wow anyone. Sadly he was most notable for failing to display the charisma that had helped to make his father a star. He did get to win the tag team titles alongside David Otunga (yes, the David Otunga) though, so it wasn’t a period completely bereft of highlights.


Axel has apparently been a favourite backstage for a while now. He's received public praise for his work in NXT from William Regal, Triple H and Jim Ross and was hand-picked by The Rock to be his training and sparring partner during 'The Great One's' latest return stint to the company.


And of course he's been selected to become a Paul Heyman guy. I'd be interested to know how the situation came about, whether it was something pitched to Heyman or whether he was asked who he'd like to work with with his existing "clients" Punk and Brock Lesnar currently off TV. It's obviously something we're unlikely to ever find out, but it would give us a great insight into not just this gimmick overhaul but the working of WWE in general.


That said, even if Axel and Heyman have been paired up by the creative department without any input themselves Axel is still going to become a Paul Heyman guy. Working on-screen together will mean the two collaborate on ideas backstage. These on-screen relationships are clearly more to Heyman than a job. It comes across in every interview he gives: he loves the wrestling business and getting to work with and help to guide other passionate people. He’s friends with Punk and Lesnar in reality and that’s come about in part from their time working together in WWE. 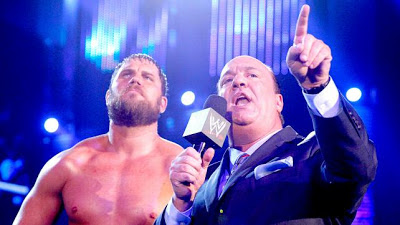 He's a Paul Heyman guy
Curtis Axel could not have hoped for a better (re)introduction. Not only does he get to work with and learn from Heyman but his first match under the new name was opposite Triple H. Say what you want about 'The Game' or the quality of the match the two had (in the RAW main event slot no less) but it can't be denied that he's a big name to face. The evening was laid out to make Axel look as good as possible.


Okay so he didn't win but that’s not a big deal. It's more important that he didn't lose (it was a non-finish). And also 'The King of Kings' didn't win. Axel wasn’t buried and he was allowed to look as competitive as he was realistically going to.


Glancing at the WWE roster there's no clear rival for Axel at the moment. If Chris Jericho sticks around I think he'd be a decent choice but I think he’s off to join Fozzy again soon. Sheamus could have been interesting too, but he's apparently heading into a programme with Damien Sandow. That leaves The Miz and Kofi Kingston as the most realistic choices. Neither strikes me as ideal for the role and I can’t imagine either producing anything especially amazing opposite Axel either.


Perhaps Axel will simply be pitted against expendable no-namers for a while, allowing him to build up a name for himself in preparation for his first real programme a couple of months into the future. That approach would be good. It would avoid pushing him too quickly and having fans resent or become bored with him. It would allow the on-screen dynamic between Axel and his representative to grow naturally as well. Another bonus. Such things shouldn't be forced.


Whatever happens Axel has an excellent chance of being a somebody thanks to his pairing with Heyman. It’s possible it could lead to matches alongside and-or opposite CM Punk and Brock Lesnar. For a guy who was in NXT a month ago that’s a wonderful position to be in. If he gets half the success his father did he’ll be doing great.
Posted by Dave at 20:22