The State of WWE: The Caste System

Yesterday I wrote about how and why WWE should clear up their title picture. Today's article can be taken as a second part or follow up to that because it’s a vaguely related topic. So it's probably a good idea to read yesterday's post before tackling this one.

At the moment the focus of WWE programming is very strongly on main event performers. This has been the case for a significant amount of time. Several years at least. It's one of the central causes of the stale feeling WWE programming has.

Generally speaking the headline names weave in and out of feuds with one another, occasionally switching from heel to face or vice versa to create the illusion of progress and fresh match ups. These feuds will generally last between two and four months and will sometimes be punctuated with the headliners dipping down into the mid-card for a brief placeholder feud.


Theoretically the idea of that is to raise the mid-carder’s standing. That all such feuds are booked half-heartedly, and unfold in the same manner, means that goal is rarely achieved. Even when it is the lack of a follow-up feud for the newly elevated mid-carder means they quickly sink back down the ranks.

Generally speaking the mid-carders are used to work competitive matches with main eventers on television (which they almost always lose). Occasionally they’ll get one of the larger roles mentioned above. If they're very lucky two mid-card guys might be put into a programme with one another that actually takes in a pay-per-view. That tends to involve a guy with either the Intercontinental or US title getting pinned in a non-title match and then winning a rematch with the belt on the line. Very few feuds take place without those trinkets involved. It's as though WWE's writing staff can't come up with a reason for two non-headliners to take issue with one another if a championship isn't involved.

Below those guys are the enhancement workers that get squashed on RAW and SmackDown, getting to wrestle lengthy and usually enjoyable matches on Main Event and Saturday Morning Slam. Beneath them are the NXT wrestlers. They may as well be random jobbers until they're plucked from obscurity and slotted somewhere into the framework.

Up above all of this are the part time guys like Undertaker, Rock and Brock Lesnar along with untouchable regulars John Cena and CM Punk. They work competitive feuds with each other and select top liners only. Anyone else who gets caught up in their gravitational pull will almost certainly end up getting squashed like Mike Bell. 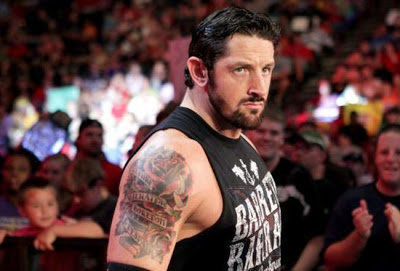 Steely glare from Barrett there

It's a neat system and one that took WWE several years to get established. The thing is that it does more harm than good so it's not clear why they went to the trouble of setting it up and making it stick in the first place.

That's a tad harsh, perhaps. The general concept of wrestlers being allocated a particular slot or level works fairly well. Moving guys up and down the ranks should be as simple as placing them in programmes with guys already in the bracket they're being aimed at and then playing things out on TV. A guy should display a knack for winning on his own level and then gradually pick up wins against guys above him, eventually entering a feud or two and advancing up the card by association.

But it's not that simple. WWE stop it from being that simple with their predictable and counterproductive booking. Take Wade Barrett as an example. He defeated Kofi Kingston for the Intercontinental championship on the December 31st RAW. That could (and should) have been followed up with a string of successful defences or impressive non-title matches against guys at his own level and the one beneath him throughout January and February. Instead he drifted aimlessly. He did pick up a solitary clean win over Randy Orton on January 14th but that proved an anomaly. Nothing whatsoever came of it.

Barrett ended up working the a brief three-way feud with Chris Jericho and The Miz, retaining his title clean against both men in a triple threat on RAW and then dropping the gold to 'The Awesome One' on the WrestleMania pre-show. He regained it the next night. Nothing was gained by either the three-way or singles portion of the programme.

The title switches aren't the problem here, it's the fact that Barrett got these big wins out of nowhere. It's been established that he can beat bigger names and guys on his level, but not with any degree of consistency. He's just as likely to win as to lose and so there's no reason for fans to become emotionally invested in anything he does. Consistency is what makes people care.

Of course not everyone can go around winning all the time. What madness that would be! But what WWE (or any wrestling promotion for that matter) can do is draw up a list of guys they what to turn into big money stars at some point. Then a course of action should be decided upon depending on their current standing on the card. To go back to Barrett (because we've already used him as an example) he's already pretty well placed to be turned into a big star. Spend a few months solidifying him in his current upper mid-card spot before having him drop the title and head into a couple of feuds with headliners.

I've written before but it bears repeating that not everyone can be WWE champion. That not every talented wrestler gets a run with the company's most coveted strap actually makes it more special. If there's a list of talented guys who never managed to win the top prize then it elevates the standing of the guys who do get a turn. They look even better because they’re part of the elite.
WWE should bear that in mind when creating new main eventers. The goal shouldn't be for everyone to win the WWE title. Nor should it be for everyone to win it on their first feud. Top stars could be established without the world title becoming involved, leaving them to challenge for and win it a year or two into their main event career. Some guys could never manage the feat. The attitude of rushing everything is what's created the current uninspiring product. There's definitely something to be said for a slower approach.
Posted by Dave at 20:36