A month or so ago it was revealed that Kaitlyn has a secret admirer. We’ve been treated to a number of lifeless backstage segments in which we’ve seen the Divas champion discussing the situation with Natalya and Brodus Clay’s Funkadactyls. It’s not been the most engrossing television but at least it’s given WWE’s female champ something to do.


On the list of things confirmed for this evening’s RAW, sandwiched between Triple H wrestling Curtis Axel and the return of Dolph Ziggler, is the reveal of the secret admirer’s identity. To be clear, just because WWE say the identity’s going to be revealed doesn’t mean it will actually happen. There’s every chance that any segment featuring Kaitlyn will simply be designed to further the mystery. The entire thing could even be bumped from the show completely.


Anyone on the roster could theoretically be revealed as Kaitlyn’s would-be-beau, but a few stand out above the others. Probably the most obvious candidates are the Bellas. Yeah, both of them. They always operate as a unit.


They’ve been shown giggling to one another once or twice after Natalya and Kaitlyn’s chats, seemingly hinting at them playing a prank. Nikki and Brie playing a trick would set up a fresh and much needed feud for Kaitlyn. Nowadays a programme between a female champion and female twins means we’ll see wrestling matches. Back in the days of the Attitude Era it would have meant something very different. Jerry Lawler would have had a field day. 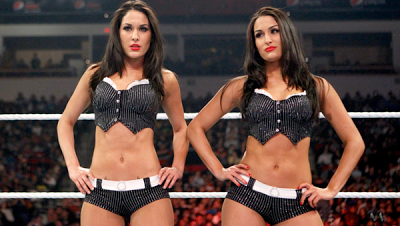 Is the secret admirer even real? Perhaps the Bellas are playing a trick
In a similar vein to the Bellas there’s potential for AJ Lee to be revealed as the one playing the prank. ‘The Crazy Chick’ became the number one contender to the Divas championship last month and hasn’t had her shot yet. She could be messing with Kaitlyn to throw her off her game for their upcoming match.


There’s nothing the Divas division needs more than plots for its performers. Either the Bellas or AJ would be good choices for a programme with ‘The Powerhouse Diva’.


Of course, the admirer is probably going to be a guy. Of the male members of the roster one of the favourites for the role is Big E Langston. If it is him there are two things WWE could do. The first is have Langston say that he was playing a joke (yep, just like the Bellas or AJ). That could feed into the AJ v Kaitlyn feud, and possibly develop into E realising that he upset Kaitlyn, regretting his actions and gradually turning face to pursue a real relationship with her.


The second option would be to have Big E’s feelings be genuine from the off. That could see him go babyface on Ziggler and AJ straight away or gradually over time. If this turns out to be WWE’s direction I think a slower approach would be best. Rushing things wouldn’t do Big E any favours. Audiences would be inclined to side with the more established and already popular ‘Show Off’. If WWE wants to promote that feud they need to bring it about slowly and convince viewers to cheer Langston. Forcing things won’t work.


For the record I like the Langston, Ziggler and AJ unit and think there’s loads left for them to do together. It’s too early to break them up. Leaving them together benefits all three and will ensure the split means more when it comes.


The only other name likely to be linked to Kaitlyn (that I can think of anyway) is Cody Rhodes. An on-screen relationship for the two was teased a few months ago before being dropped in favour of teaming the Rhodes Scholars with the Bellas. Pairing Cody with Kaitlyn now would not only give him a storyline (something he’s been without since last autumn) but it could also be used to lead to a face turn and a World Heavyweight title feud with Dolph Ziggler. 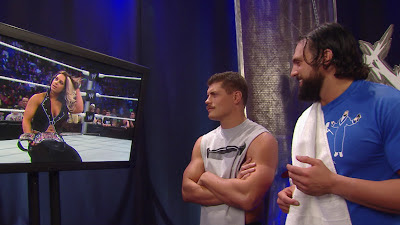 Cody has form when it comes to admiring Kaitlyn
There are other options of course, but none of them are terribly interesting. It’s the sort of storyline you could quite easily imagine being given to Zack Ryder. If the decision’s been made to wrap the story up instead of going somewhere with it (something that happens all too often in WWE) then Hornswoggle could very well be brought in to play the punchline. It could even be Christian’s route back on to television, despite the fact that he’s been married for twelve years.


Of everyone on the roster Rhodes would be my top choice for the role. He’s been a heel for a long time now. Going face would let him change his act. A well plotted story taking place over a number of months could see Cody initially spurned by Kaitlyn and showing his heartache before gradually winning her round and becoming an on-screen couple. If that doesn’t encourage audiences to sympathise with him and turn him into a genuinely liked star I don’t know what will.
Posted by Dave at 10:46