Rey Mysterio's been injured, on and off, for over two years now. It's reached the point where his credibility as a reliable main event performer is almost completely eroded and his long term health is in jeopardy. He's generally okay when he turns up but no long term plans can be made for him because the chances are that he won't be around to see them through. I’d like to advocate retirement for him.


The latest on his knees, which are said to be the cause of his erratic schedule, is that they'll be healthy enough to allow 'Mr 619' to compete at SummerSlam. This is by no means a certainty. He was originally going to be back in the ring by June.


I'd like to advocate holding off his return for beyond ‘The Hottest Event of the Summer’. If the last few years have taught us anything it's that rushing back from an injury does Mysterio no favours. It has no impact on ratings either, so it’s not even as if something’s gained from the rush. It would be best for Mysterio if he spent the rest of the year resting. That would allow him time to return to full health and give WWE a chance to prepare a storyline for when he comes back. 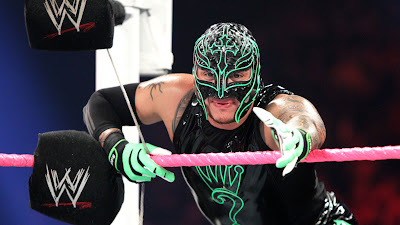 Mysterio there, invoking the Riddler
It's the return plan I'm interested in. I think WWE and Mysterio should be thinking of his next return as his last, hence the reason that he should be as healthy as possible to avoid any injury-related complications. All parties should want to give Mysterio the send-off he deserves.


They could even do a longer wait and have Mysterio go out at next year’s SummerSlam. With a bit of effort WWE could turn SummerSlam back into their second biggest annual show, the WrestleMania of the summer.


Obviously things like fanfests can help with that but the best way to make SummerSlam mean something would be to hoard big names for the show. They seem to be doing that with CM Punk v Brock Lesnar this year. But the top three or four matches need to be big if SummerSlam’s to do truly impressive numbers. Again a Mysterio retirement stip could help with that.


The ideal way to reintroduce Rey would be through a series of vignettes in which he discusses the reasons for his time away, his passion for wrestling and his desire to come back and show that he can still be as good as people remember. He could talk about having one more run and cementing his spot as one of the greatest wrestlers ever.


Reveal a return date for Rey and show a new vignette every week. The should ensure people are aware of his return. From there the company should know roughly how long they’re going to have access to Mysterio for before he retires and draw up a list of all the opponents they want him to face in important matches.


The biggest matches should be saved for pay-per-view. Everything else could be a heavily promoted TV match. Yeah, I still think WWE could improve their ratings by advertising matches. I’m crazy like that.


Mysterio has been an important member of the WWE roster for a long time now. He’s won world titles and had some memorable and very enjoyable matches. The guy deserves a send-off befitting what he’s accomplished in and for WWE.
Posted by Dave at 15:55