From Sandy Fork to New York

The Briscoes are off, apparently. It's been rumoured many times over the years that the brothers would leave Ring of Honor for WWE. The latest iteration started circulating last weekend when it came to light that neither Jay nor Mark would be appearing on any ROH shows for the foreseeable future.

The situation has become more bizarre as the week's gone on. Various websites have reported that the Briscoes are heading to WWE, while Ring of Honor has maintained that the Briscoes are taking time off to heal, which, frankly, sounds like a load of old cobblers. Wrestlers, particularly those without the wages of WWE Superstars™, are not in the habit of taking time off unless they have absolutely no alternative.

There's also a worrying rumour that the Briscoes contracts have expired. This is very similar to the situation that arose last year: the tag team titles were won by the All Night Express when the company knew that Kenny King was either working without a contract or soon would be. That was a stupid move. Doing the same thing with Jay Briscoe would be worse.

Not only should ROH and their owner SBG have learnt from last year's debacle, they should have also taken the championship off of Briscoe when they had the chance. If they didn't want to switch it to Matt Hardy then they could have had someone else issue an impromptu challenge to Jay for an unadvertised second world title match at the TV tapings. 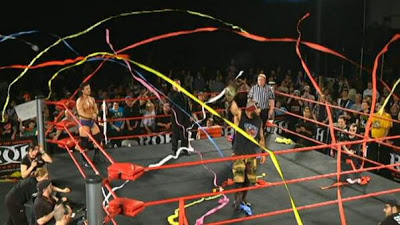 Maybe Adam Cole should've won this match
The truth of all of this seems evasive. I don’t believe Jay would leave ROH without dropping the championship. He and Mark both strike me as men who think enough of Ring of Honor and its style of presentation to do the right thing and put someone over on his way out.

Their absence from future line-ups could truly be due to them being given some time off to rest. Both work most ROH shows and with the next big event not being until August (Manhattan Mayhem V) it's entirely possible they're on holiday as opposed to leaving.


Of course what throws a spanner into the works there is that ROH have announced that there will be an announcement made regarding the status of the title “soon”. It’s teased in said announcement that Michael Elgin could be awarded the title by forfeit as he was due to be the next challenger. I’d by disappointed at the avoidable disruption to the lineage of one of wrestling’s most meaningful titles were anything like that to happen, mostly because it could so easily have been avoided.


That an announcement is imminent means there’s something to announce. I can’t see what else it could be than Jay being relieved of the gold.


Perhaps it’s all a lot of misdirection and ROH know Jay will be at an upcoming show to drop the title in a surprise, unadvertised bout. I’m not going to get my hopes up for that though. Again, the simplest thing to do would have been for him to lose the belt last Sunday.


It's also interesting that not all of the regular sites took note of this story. Some cover ROH more than others but all of them would cover something like a pair of major stars (which the Briscoes are) leaving for WWE. That not every major wrestling website covered the story makes me think it may not be entirely true.

This isn't to say that I don't think WWE would be interested in them. I think the Briscoes would fit with the fed's recent interest in top indy talent. They've been told before that they don't have a marketable WWE look. That's true as far as the standard WWE look is concerned, but it also appears to be less of an issue than it was five years ago. Sami Callihan has been signed to a contract and as good as he seems to be he doesn’t look like a traditional WWE Superstar™ either. He's been signed so the Briscoes certainly have a shot.

If they do wind up in WWE (which I'm not convinced is happening yet, remember) I think they could make a real difference to the product. They've got over a decade of experience working as a team and would work pretty well as good guys on the main roster with a modified version of their current act. They'd probably need to tone down the farmhands bit a little (and, in Jay’s case, avoid the rampant homophobia) because I can't imagine Vince McMahon liking it (or even comprehending it) but otherwise I think they'd be ready. It's the Briscoes, not the Wyatts, that I think would work well as opposition for The Shield.

Of course if they have signed or do sign they'll have their obligatory stay in NXT. Expect 'Dem Boys' to become the doubles champs there very quickly.

If Jay does need to drop the title and returns to do it I think Adam Cole is a strong contender to beat him. He'd work as a heel for ROH's bounty of babyfaces to chase and wouldn't be considered a ridiculous choice of champion as Matt Hardy would have been (although the fact that fans would have hated a Hardy title reign is the main reason I think it would have worked).

Whatever the Briscoes have planned, whatever titles they chase next, and wherever they end up working, I wish both men all the best in their future endeavours. I’ll be less inclined to extend those wishes to ROH if it turns out that they’ve let another champion’s contract expire.
Posted by Dave at 20:25