Does Ryback seriously have a chance at winning the WWE championship in his current feud with John Cena? He's not won on pay-per-view in a very long time, which isn’t generally a good sign for someone embarking on a run with a major title. Besides, if he were going to become champion it could very easily have been arranged for Extreme Rules. On top of that Cena's only a month and a half into his current reign at the top after an extended stay away from the title.


Basically things don't look to be in Ryback's favour.


I don't necessarily think any of this is a reason to count him out though. WWE's booking is so inconsistent these days that he could win the belt at any point. Cena’s eleventh reign may not have lasted too long but he doesn't need the title to be accepted headlining pay-per-views. He could comfortably main event pay-per-views until he retired without ever winning the title again. People know he's the company's top star. Not everyone likes it but it is accepted.


The same can't be said for Ryback. As WWE cannot continue to rely on Cena (and to a lesser extent CM Punk) indefinitely and a number of other prospective megastars have failed it's important that 'Big Hungry's' push works. That doesn't necessarily translate to him having to win the WWE championship right now but it does mean that he’s in with a better chance than if WWE had a greater number of wrestlers about to crack the top.


Of course it's arguable that WWE have already messed up Ry's shove. His original appeal was that he spoke little, dominated all his opponents, and was a credible alternative for those who don't care for the antics of Mr Cena. Since turning heel the night after WrestleMania Ryback's become a very chatty member of the roster. More than anything else that's destroyed the aura WWE had built up for him. It's not that he's bad at promos. He's a bit disjointed and mechanical certainly, as though he's trying to remember the bullet points he's been instructed to hit, but he's not bad.


Almost as harmful have been the string of competitive bouts he’s had since the start of the year. That he's finding it harder to dispatch the same bunch of expendable guys he was flattening over six months ago means, in kayfabe terms, that either they've got better or he's gotten worse. A mass improvement seeming unlikely the conclusion we're left to draw is that Ryback's gotten worse. Or at least less focused. That's not going to help his cause.


The best thing he had going for him was being a babyface alternative to Cena. That went with the heel turn, which is why I think it was a stupid thing to do in the first place. Ryback was of more benefit to WWE as someone for Cena's detractors to latch onto rather than as a generic heel. 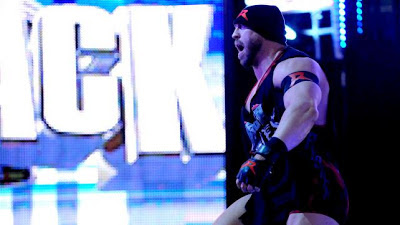 Remember when it looked like he could replace Cena at the top?


To go back to my original question I don’t think it’s impossible we’ll see Ryback with the title soon. The Three Stages of Hell match announced for Payback seems to be set up to determine a clear winner, while at the same time providing plenty of options for screwy finishes. It's very tricky to go to a non-finish in a two-out-of-three falls match or an Ambulance match. It's also very unlikely WWE would do two non-finishes with the same guys, for the top title, on back-to-back pay-per-views.


It’s likely we’ll see the loser protected. The first fall being a Lumberjack match makes me think that something will happen between one of the competitors and a ringside enforcer, setting up interference (likely in one of the latter falls) that costs the loser the bout or instigates a turning point for the victor.


It could be Ryback's night. If it's not and the feud continues to Money in the Bank (and possibly even beyond) it's going to be difficult to take subsequent challenges seriously. If 'The Human Wrecking Ball' loses at Payback it would be best for him to move on to a new programme or two where he can be rebuilt with some wins before returning to challenge for the strap later in the year. Two unsuccessful title challenges in a row combined with his abysmal track record on recent supershows will make it very tough for Ryback to get over meaningfully.


Ryback strikes me as a guy who’s going to be getting the WWE championship at some point this year. What’s concerning is the lack of feuds for him to have once he’s finished with Cena. CM Punk and Chris Jericho strike me as the only established guys who could challenge ‘The Human Wrecking Ball’ on pay-per-view. There are plenty of guys who could get great matches from him (Daniel Bryan, Christian and Kofi Kingston spring to mind) but none of them are in a position to main event a big event.


The poor work done elevating new names is, once again, coming back to bite WWE.
Posted by Dave at 17:30