On July 14th WWE will present their fourth annual Money in the Bank pay-per-view, the focal point of which will be the titular ladder match or matches. It’s not yet been stated whether there’ll be one or two of them but if the last three years are anything to go by we’ll see two, each one linked to one of WWE’s two world titles.


Considering the state of the roster WWE should really just be planning on the one. There just aren’t enough guys to present the traditional two worthwhile matches at this year’s show. As Money in the Bank is a star making tool regular main eventers always feel like peculiar inclusions in these bouts. It’s a match designed to elevate mid-carders, and because the mid-card has been neglected for so long WWE only has enough guys to put together one decent match.


Promoting two would dilute the quality. Presenting one would allow WWE to use only the best talent and avoid sticking guys in just to keep the numbers up. I’d rather watch one very good match than two average ones. It would also allow a fresh scenario to be presented: the winner being allowed to cash-in their case against either of the company’s two world champions. It would make things far more unpredictable and give the company more for booking the cash-in.


What’s interesting now, over a month before the show, is how there aren’t any obvious candidates to win. Someone could still be plucked from the pack and given a push before the event but that’s probably not going to happen. The last few years have shown that WWE is much happier using a Money in the Bank victory as a starting point for a push to the top than as the culmination of months of work.


There are several guys who could be picked to win the match (or one of the matches). Kofi Kingston is not amongst them. ‘The Wildcat’ has been given time off to get elbow surgery and is expected to return in early August, weeks after the Money show. He’s used every year to make up the numbers so he would certainly have competed in a ladder match this year had he been healthy. WWE having exhausted most of their other options for new stars he would have stood a slight chance of winning too.


Cody Rhodes is someone who could be pushed to the top. He’s a reliable member of the roster and has enjoyed a couple of reigns with a mid-card championship. That’s the established background of several previous MITB inners, including Dolph Ziggler, Edge and Daniel Bryan. Also in Rhodes’ favour is that he can work as either a heel or a face. He’s been a bad guy for years now but he was effective as a fan favourite when he was first introduced. A face turn could be what he needs to help him make the leap to main events. 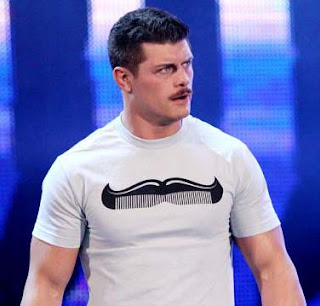 Is this Cody's year to grab a case?
The other half of The Rhodes Scholars, Damien Sandow, is also a possible winner. ‘The Duke of Decency’ has a solid gimmick and, like Rhodes, the ability to wrestle lengthy, enjoyable matches with most members of the roster. His chances of winning are not great though: his character is incredibly enjoyable but it’s not the sort that WWE would slap a world championship on. He’s not the worst choice you could make though, which says a lot about the options WWE have left themselves with.


Sticking with heels who could win (because there aren’t really very many credible faces outside of the main event in WWE) there’s Wade Barrett. The former king of bare knuckle boxing (or whatever his gimmick is) has seemed on the cusp of getting a tryout as a headliner for a while. He may be saddled with the IC strap right now but his feud with The Miz and Fandango (and no Curtis Axel) could see him free himself of the mid-card trinket before heading on to bigger things with a briefcase.


Barrett has the promo skills, look and ring ability to work as a main event wrestler in WWE. If the company can bring themselves to keep a push going for more than a few weeks he’d prove he’s ready for better things.


If WWE wanted to create a new face star they could have Big E Langston win a briefcase at this year’s show. He’s the sort of wrestler they like to have as a lead babyface (basically, he’s a strong dude). That’s in his favour, as is his affiliation with current World Heavyweight champion Dolph Ziggler. Big E could win the MITB case and then tease turning on ‘The Show Off’. If planned and timed correctly that could be an enjoyable story that turns Langston into a huge face when he finally flattens Ziggy.


Of course it could also backfire and result in Langston being booed in favour of the already over and far more tenured World champ. That’d be fine too: the feud could continue with ‘The Heel’ in the babyface role, perhaps with AJ turning on her man to side with Langston.


The only current babyface that strikes me as having a realistic chance of being entered into a Money in the Bank match and winning is Daniel Bryan. ‘The Dazzler’ has been one of the company’s most popular wrestlers since the yes and no craze took off at the beginning of last year, despite WWE trying to bury him at times. The weak link storyline he’s heading into at the moment could culminate with him winning Money in the Bank for the second time, thus “proving” to everyone that he’s a credible wrestler. 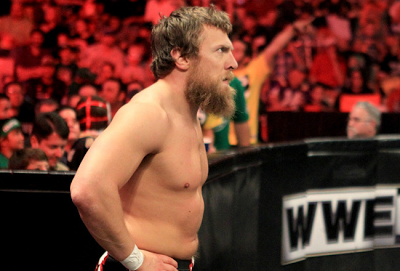 Could he be a two time 'Mr Money in the Bank'? Yes! Yes! Yes!
Curtis Axel isn’t the most ridiculous guy to suggest as a winner either. The company seems to be behind his push and it could be used as a way of launching him further up the card. I personally think this year would be too early for him to be a world champion, but this time next year he could be ready if he remains protected and affiliated with Paul Heyman. Of course, he could lose his cash-in too. That could harm him but it could also be used to tell a new and interesting story that MITB’s not been used for yet: a mid-card guy being too cocky on his cash-in and failing due to that overconfidence.


The final guy I think has a reasonable chance at becoming ‘Mr Money in the Bank’ is Antonio Cesaro. He’s been on a well-documented losing spree since the start of the year, falling to fellow mid-carders and high card talent alike, having to satisfy himself with wins on weekend shows and NXT.


That’s part of WWE’s standard approach when using someone who was popular in the indies. The same thing happened to both CM Punk and Daniel Bryan. They’re both doing okay now. By the time Money in the Bank comes around WWE may have stopped the nonsense with ‘The Swiss Sensation’ and be prepared to start positioning him for a top spot.


Even if that doesn’t happen I’m confident Cesaro will be in Money in the Bank as a reliable hand to make up the numbers. And he won’t be the only one. We can also expect the likes of Sin Cara, R-Truth and Christian to flesh out the Money matches (especially if WWE goes ahead with two). It’s possible we’ll see former champs like Jack Swagger, The Miz and Alberto Del Rio getting in on the act too. The former champs could win I suppose, but it would be a bad decision on WWE’s part. As I said above, Money in the Bank is a star-making tool. Former world champions winning just helps to maintain the status quo. And that’s the last thing WWE should be doing.
Posted by Dave at 15:24