Taking IMPACT on the road is something TNA should have done years ago. But, y'know, better late than never, it's been announced that the promotion's long-standing association with Universal Studios is to become a thing of the past. IMPACT is finally going on the road.

TNA first made the move to Orlando, Florida's Universal Studios in 2004. It was, at the time, a shrewd move as it allowed the company to save money on hiring venues and lugging their equipment around the country. It also granted them access to the existing recording gear at soundstage 21. On a handful of occasions in the past several years IMPACT has been broadcast or taped away from The IMPACT Zone, but that's been the exception rather than the rule.

Having a regular location for IMPACT may have saved money but it's had plenty of drawbacks too. For one thing TNA haven't made money from the deal, unable to charge admission because of the Studio's established entrance fee policies. This has led to a reliance on tourists and a core group of regulars. 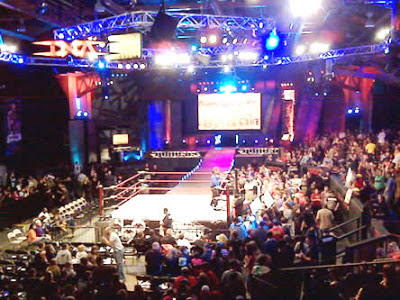 Say goodbye to this place

This has become a problem in its own right. For a long period of time the TNA bookers were more geared towards pandering to their few dozen regulars than people watching at home. Wrestlers were turned heel or face depending on what the IMPACT Zone regulars wanted, with no thought given to what home viewers may have wanted. What storylines there were were also scripted more with the live audience in mind. It was not a good way to approach the task of increasing TV viewing numbers.

The new format will be to broadcast a live episode of IMPACT and tape the next week's show immediately afterwards. This should help keep spoilers to a relative minimum, with only one episode in two being taped. It will also help TNA's finances. Two episodes being filmed in one night obviously halves the number of IMPACT shows the company needs to run. Being away from Orlando means the group don't need to rely solely in merch sales at events either. They can now (gasp!) charge admission to shows. It should see new markets opening up to the group too. Which obviously wouldn't be a bad thing.

In short, this move's been a long time coming. It’s nice to see that TNA got there in the end. It's the right decision and should contribute to the continued improvement of IMPACT that's been going on since last year.
Posted by Dave at 20:01