From Masks to Glasses

I want to commend TNA on the good work they've done with Chris Park over the last year. Under his previous persona of Abyss Park had done everything of note in TNA, making himself stand out in dangerous and bloody brawls in particular. He was, in a way, a Mick Foley for the 2000s, albeit without the vaunted promo ability or technical prowess in non-stunt environments.

His transformation into Joseph over the last year has allowed us to see another of Chris Park. It was clear as soon as the character was introduced that he was designed as a more promo-friendly guy than Abyss ever was. Over time he has transitioned into a comedic role, losing the steely edge displayed when he was first seen a year ago.


When he first appeared Joseph was looking for his “brother” Abyss. He hadn’t been seen in months, the result of a feud with Bully Ray, which had involved a backstage segment which strongly (not to mention disturbingly) hinted that ‘Calfzilla’ had caved in the masked man’s skull. In a metafictional and mildly confusing twist it was acknowledged that Abyss was a TV character played by Chris Park and that his brother Joseph was a lawyer investigating his disappearance.


The confusion, of course, arises from the fact that both characters are played by the same man.

Joseph was involved in some gimmick matches last year in which he was booked as a non-wrestler. While he didn't get as violent as Abyss used to in such bouts it was still very much the performer's comfort zone. The spot in which Joseph "surprised himself" by managing to hit a Black Hole Slam (Abyss's signature move) aside nothing noteworthy happened for the character from an in-ring standpoint in 2012.


The waters were further muddied by the bizarre decision to have Abyss interfere in the match between Joseph and Ray at Slammiversary. At that point it seemed set to become the most schizophrenic plot in TNA history. Thankfully Abyss hasn’t been seen since and the focus has been exclusively on Joseph.

We saw a different side of Chris Park as a performer on the January 31st IMPACT. Joseph Park had his first official match as a member of the TNA roster, defeating Robbie E. In a match that was a world away from the average Abyss outing the emphasis was firmly on comedy and basic wrestling exchanges. That Park (whichever first name you want to attribute to him) was able to work this style so well when you consider what he's become known for speaks well of his versatility as a performer.

It looks as though Joseph is going to stay a regular on our screens for a while yet. That’s good news. He’s proven a likeable character popular with the promotion’s viewers. As he’s only just become an active member of the roster (despite being a regular for a year) there’s still plenty of mileage left. It’s easy to imagine Joseph working against many of TNA’s top bad guys. 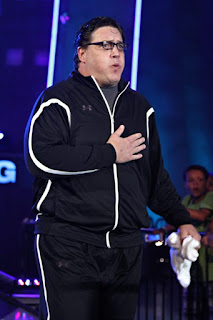 Joseph is a fan of the Hitchhikers' Guide to the Galaxy


That Joseph Park has been fleshed out to such an extent means that the inevitable return won’t be as predictable as I originally expected. Had the lawyer disappeared after a couple of months then the return of Abyss would have been just another event. That so much time has been spent establishing him as a character in his own right means there’s a greater payoff to be had when Abyss finally returns.


Of course it’s difficult to imagine a scenario where this saga doesn’t end in disappointment. Before he comes back we can speculate on what TNA will do, how Abyss’s absence will be explained, and whether Joseph’s intentions have remained honourable all along. We can guess at what the lawyer instinctively hitting a Black Hole Slam means. Once Abyss is back on TV, confronting his brother or revealing that they’ve been the same person all along all the mystery will be gone and we’ll be left with just another wrestling angle.


The best thing about Joseph Park is the sense of mystery he’s introduced to TNA. Sooner or later that will be gone. We should enjoy him while we can.
Posted by Dave at 19:53