The Return of Jack Swagger

On the September 3rd 2012 edition of Monday RAW Jack Swagger suffered a loss to Sheamus. It was the latest in a long line of quick defeats that had plagued Swagger all year. In a backstage segment later on in the broadcast he informed General Manager AJ Lee that he would be taking time off. “I’m better than this!” he told her.


On the February 1st 2013 edition of Friday Night SmackDown Swagger made his triumphant return to WWE television. His sabbatical was immediately referenced by Josh Mathews on commentary. JBL chimed in that Swagger had spent time away from WWE refining his game.


Neither claim was true. Swagger had not been on a sabbatical from WWE. He’d been removed from television because the writing team didn’t have a clue what to do with him. He had remained a regular on house shows and in dark matches at TV tapings. He had not undergone the image overhaul that JBL seemed to believe he had either. Unless you count growing your hair a little and introducing a beard to your face a radical new look that is.


I like Swagger and I want to see him succeed. His scripted lines on the September 3rd RAW couldn’t have been more true. He is better than continual and meaningless losses.


Swagger has the height and look WWE is known to crave in their headliners. He has an impressive and well-documented amateur wrestling background. His verbal skills, while not the best, are enough to get him by if his limitations in the area are catered to. Yet he still finds himself not being taken seriously.


The reason for this is the way he was booked for much of his first year or two in the company. The writing team gave nobody any reason to view him as anything special. He wasn’t portrayed as a star on the rise or a headliner in the making. He was just another guy who wrestled and talked like everybody else.


A fine example of this mistreatment came during his World Heavyweight title reign in 2010. ‘The All American American’ won the Money in the Bank match at WrestleMania XXVI (the last match of its type to take place at a ‘Mania, fact fans!) and cashed in two nights later to beat Chris Jericho at a SmackDown taping. He went on to have a reign that included defences against ‘Y2J’, Edge, Randy Orton, Big Show and Rey Mysterio, but was never granted a clean win over any of them. It was incredibly clear that Swag was a fluke champion and not in the league of the seasoned main eventers. 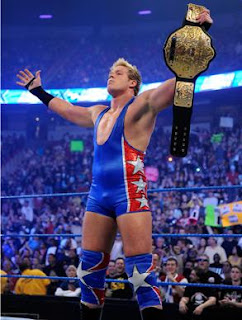 The most under-pushed World Heavyweight champion ever
Later in 2010 the mistreatment of Swagger reached its zenith when he was paired up with his own personal mascot, a soaring eagle played by Chavo Guerrero and Jamie Noble (though never at the same time). Swagger was clearly a comedy character by this point. That a man his size needed help from someone in an eagle suit to win made it clear he was not to be seen as a threat to the top guys or as a serious wrestler.


The lunacy continued in 2011 as Swagger became Michael Cole’s on-screen coach during his insanely over-pushed feud with fellow commentator Jerry ‘The King’ Lawler. This situation could have been salvaged had Swagger and Cole’s roles been reversed. It would have made far more sense for the former World champ to represent Cole in a match against Lawler at WrestleMania XXVII rather than run interference at ringside. But then the entire Cole push was ludicrous from beginning to end.


Swagger was briefly rehabilitated later in 2011 when he joined forces with heel magnet Vickie Guerrero and bump machine Dolph Ziggler. Thanks to ‘The Show Off’s’ distinctly average height Swagger looked larger than usual during their partnership, and the two proved to have good chemistry as a tag team. Meanwhile having Vickie as his manager paved over the weakest area of his work: promos.


By the time September 2012 rolled around Swagger had been split from Ziggler and Guerrero and been used as a glorified jobber with no proper role on any of the company’s TV shows for months. It had reached the point where he needed to be taken off TV to give fans a break from him, allowing him to return fresh for a renewed push sometime down the line.


Unfortunately it doesn’t look as though the refresh has had as much thought put into it as it should have. As I mentioned above Swagger’s new look is pretty generic. He’s not got himself any new ring gear or changed up his style. He has to shoulder as much blame as the writing team here: it’s up to wrestlers to give the creative types a reason to invest time in them. Longer hair and beards don’t qualify. At the very least Swagger should have invested in some new singlets and decided on a new move for his arsenal.


Despite the half-hearted approach to Swagger’s rejuvenation taken by all involved the decision was made to bring him back to TV. There Swagger cannot be blamed: he has nothing to do with WWE’s scripts. That his return was attributed to Teddy Long taking a random interest in him is either ridiculous or an insult… or a ridiculous insult. Swagger and WWE’s audience deserve better.


There was nothing about Swagger’s promo or match on the February 1st SmackDown that indicated he was a changed man who would soon be headlining cards. I assume that his return means he’ll be a part of the blue brand’s Elimination Chamber match on February 17th. Why would he return in this fashion if not to take part in the match?


I can’t envisage him winning this match. In fact beyond making up the numbers in a cage match while Sheamus is off tangling with The Shield I can’t see any reason for his return to television. There are no clear feuds for him over the next two months. There is no clear match for him at WrestleMania. There just doesn’t seem to be anything for him to do.


It’s a great waste. Swagger could be a star if used with a little thought. He could have been reintroduced to TV as a babyface and set against Antonio Cesaro. Swagger has been a pro-American heel throughout his entire WWE career. A minor tweak, turning him into a good guy, would have refreshed his entire character without requiring any sweeping changes. WWE fans always respond well to a flag-waving hero.


WWE has surprised us with Swagger pushes from nowhere before. They have never gone well. The best approach to take with a guy like him is to prepare him over a course of a few months before launching him to the very top and sustaining his push. Swagger’s confidence has been battered by prematurely quashed pushes before. If he’s going to amount to anything now he’s back on TV then WWE need to come up with a plan for him and stick to it. He’s good but he’s not the sort of guy to become a star overnight.
Posted by Dave at 14:25