The problems that have been brewing for the last few weeks between Conor O’Brian and Big E Langston finally led to a match on this week’s NXT. It wasn’t the greatest match you’ll ever see but it wasn’t supposed to be. It was supposed to be a hard-hitting collision between two powerful brawlers.


Considering the wrestling styles of the two men that was the best approach. They had a surprisingly entertaining tussle that mostly involved swapping holds and exchanging power shots. Predictably there was no clear winner. The first meeting between them had to end in disqualification or something similar in order to set up a rematch. It’s just the way things work in wrestling. It means that when the good guy eventually scores the win over his foe he will have overcome a greater obstacle than he would otherwise.


I like the Langston v O’Brian rivalry. It’s being built without the anarchic sense of rush that would be present on WWE’s regular programming. The far more sedate pace that NXT permits is of great benefit when constructing feuds that are designed to be easy to follow.


Big E, an enforcer for bad-guy-on-the-rise Dolph Ziggler on the main roster remember, is incredibly popular with the NXT regulars. It’s a promising sign for his future prospects. He’s not going to be a henchman forever. At some point he’ll go it alone. His popularity in NXT indicates that he could work as a babyface in WWE if used correctly.


Langston gets to show far more charisma on the developmental show. If you’ve only seen him on RAW and SmackDown you could be forgiven for thinking that he’s just a pile of muscles with a questionable taste in ring gear. He’s got a personality and a sense of humour (hence his ring gear), he just doesn’t get to show them much outside of NXT.


Conor O’Brian is not as effective as Langston. That’s to be expected though. If he were he’d have been called up by now too. Without Kenneth Cameron to team with The Ascension gimmick is, frankly, a little bit silly. There’s something about tag team wrestling that makes dressing like Conan the Barbarian and wearing bright contact lenses acceptable. If he’s to graduate from NXT O’Brian had better start devising a new character for himself.


How about a heel tree surgeon?


One final thing to note about NXT’s main event is the surprise appearance of Corey Graves. After Langston v O’Brian had been called off the champ posed with his belt in the ring, only for Graves to run in through the crowd, attack him, and leave with the belt. Graves is one of the best things on NXT at the moment. His promotion to a title feud with ‘Mr Five’ should mean we get some good matches and promos. 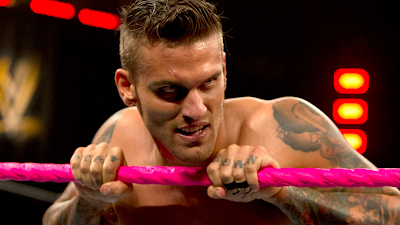 Future NXT champion?
Aside from that match the most striking thing about this week’s NXT was the fact that both the featured heel Divas are being booked almost identically. Both preen on the way to the ring, both cut daft promos about how they’re the most attractive creatures on the show, and both witter about being overlooked.


If Summer Rae and Audrey Marie, who are targeting Paige and Sasha Banks respectively, are to become useful assets to WWE then they’re going to have to be given their own characters at some point. Both women should sit down and figure out ways to make themselves stand out despite the vague and generic lines given to them.


Tweet 1: NXTweet.
Tweet 2: Little summary of the tag title tournament final. Immortality was also on the line. Well, it was according to Dawson.
Tweet 3: Subdued recap.


Tweet 4: Here's Yoshi Tatsu. First time I'll have watched one of his matches in months. I don't watch Superstars.
Tweet 5: Bray Wyatt's wrestling? #win
Tweet 6: "I feel danger and I feel evil" - William Regal on Bray Wyatt
Tweet 7: Bray Wyatt wins! What a shock! WHAT AN UPSET!
Tweet 8: Are Luke and Erick supposed to be brothers?
Tweet 9: Bray likes to watch brothers with different surnames fight.
Tweet 10: I don't care that the segment made no sense, Bray Wyatt is GREAT. 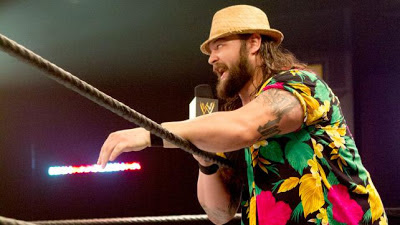 He also has a nice line in shirts


Tweet 11: Rene Dupree? No, Renee Young.
Tweet 12: Sasha Banks gets to meet her secret admirer tonight! She's excited! We all are.
Tweet 13: That reveal was dull. I don't know who the secret admirer woman was. The commentators should've been on that. 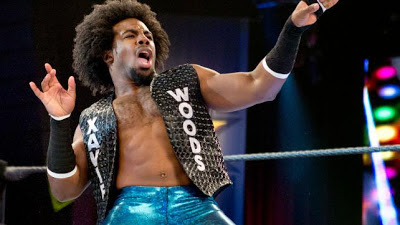 He's quite the mover and shaker

Tweet 16: If ECW were still going I can imagine Xavier being a member of the FBI.
Tweet 17: El Local has a distinctly La Parka physique.
Tweet 18: Did Regal ever wrestle in Mexico? That'd be a dastardly style clash to watch. He could pull it off though.
Tweet 19: "I'm an original raver, me. 1988" - William Regal #ImnotaraverImstraight
Tweet 20: This commentator is worse than Dawson.
Tweet 21: … Unless it is Dawson. It's difficult to tell and they've not introduced themselves.
Tweet 22: Xavier Woods wins with a tornado DDT. When was the last time that move got a win?


Tweet 25: If Audrey Marie is supposed to be a heel someone should tell her not to high five kids in the audience.
Tweet 26: Regal with a subtle dig at the lack of imagination given to Divas feuds there.
Tweet 27: It was a short match but it was pretty decent. Heel Divas get booked strong in NXT.


Tweet 28: Speaking of which... Summer Rae.
Tweet 29: Summer wants to be referred to as 'The First Lady of NXT'. I wonder where she got that nickname idea from...


Tweet 30: Whoever's interviewing Tyson Kidd looks like a budget version of Lance Storm.
Tweet 31: James Andrews performed surgery on Tyson. What's wrong with Mike Sampson, eh?
Tweet 32: Tyson Kidd looks like a newsagent in his mid-forties.
Tweet 33: Punk makes a passing comment about Kidd being a workhorse and it becomes a gimmick. I can't wait till he comes back as 'The Workhorse'.
Tweet 34: Here's Leo Kruger with his 1970s racist BBC sitcom voice.
Tweet 35: Justin ‘The Hair’ Gabriel.


Tweet 36: How much of Big E will we see in this match?
Tweet 37: Conor O'Brian should form a tag team with Sin Cara. They'd save on lighting effects.
Tweet 38: People are loving Big E. 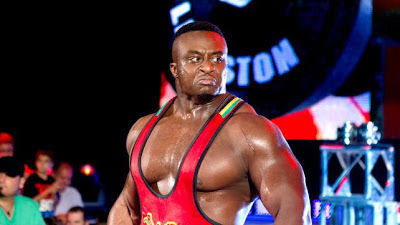 The champ is here

Tweet 39: Lots of lockups going on here...
Tweet 40: It's a perfectly sound match but there's nothing noteworthy about it. Power exchanges are the order of the day.
Tweet 41: The referee jumped between O'Brian and Big E and then disqualified them for hitting him. What a weak finish.
Tweet 42: The show goes off the air with Big E chasing Corey Graves backstage. Graves has stolen the belt. Next NXT champ? Maybe.
Posted by Dave at 10:25