On paper the 2013 Elimination Chamber looked like it could be a very good show. With a rematch of the previous month’s successful Punk v Rock clash headlining and an undercard that boasted a Chamber match and The Shield in only their second WWE match there were plenty of chances for highlights. It could have been great.


Unfortunately it was only good.


Usually a wrestling company should be happy if they put on a card that can be described as good. Not so here. With Elimination Chamber WWE were coming off a very strong Royal Rumble pay-per-view and building towards their biggest card of the year. It was a middleman show but that wasn’t to stop it being entertaining in its own right. I’ll discuss this further below.


Things kicked off with a World Heavyweight championship match between Alberto Del Rio and Big Show. It wasn’t bad but it wasn’t as thrilling as their last man standing outing at the Rumble. Fought under standard rules it was never going to be.


The two could have been given a little leeway, especially as the only other gimmick match on the card was the cage battle. As it was the final entry into their feud they deserved the chance to go out with a bang. A falls count anywhere battle would have worked fine.


Del Rio won via tap out with his cross armbreaker submission. Thankfully he’ll be leaving Big Show behind. Presumably ‘The Giant’ will be paired up with Ryback for WrestleMania. As I’ve written before a Shell Shock on Show seems like a WrestleMania Moment™ waiting to happen. 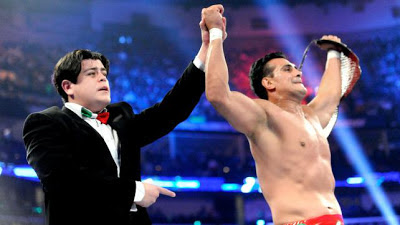 Those red trunks must be lucky
Match two was the United States title match between Antonio Cesaro and The Miz. It was an average match that seemed worse than it was thanks to an uninterested crowd. ‘The Awesome One’ got DQed after Cesaro deliberately got himself low blowed. This was probably done to set up another outing between the two either for WrestleMania or a TV show in the next six weeks. Either way I’m not looking forward to it.


Up next, surprisingly early in the running order, was the Elimination Chamber. Zeb Colter cut a promo beforehand. It was similar to the one he gave us on RAW. American has failed itself and he and Jack Swagger are going to clean it up. He uttered his “We the people!” phrase too. Taken on its own it doesn’t really mean anything.


WWE made the smart decision of having Chris Jericho and Daniel Bryan start things off. Well, it would have been a smart decision had ‘Y2J’ not been having one of his off nights. He didn’t make any major fumbles, he just seemed generally sloppy, rushing through what should have been standard exchanges and seeming overly keen to show how good he and Bryan are against one another.


‘The All American American’ was the first man unleashed from his cell, followed by Kane. Bryan and ‘The Big Red Machine’, who were (and are) still the tag team champions despite not having taken their belts to the ring for this match, turned on one another moments after they’d performed some generic double team moves. Although he’d told Kane he’d watch his back throughout the match Bryan tried rolling Kane up for a schoolboy.


Kane kicked out of that at one.


The two battled for a moment or so before Swagger and Jericho rejoined them to establish that it was now every man for himself. Team Hell No were not helping one another.


Orton entered the ring and didn’t really do anything of interest. Finally Mark Henry lumbered in as everybody was down. He quickly eliminated ‘The World’s Toughest Vegan’ with a World’s Strongest Slam, then did the same to Kane soon after. In a spot destined to make it onto future Chamber hype videos ‘The World’s Strongest Man’ blasted Orton through the Perspex of one of the cells. That wrote ‘The Viper’ out of proceedings for a bit to allow him a heroic comeback spot later.


Henry, Swagger and Jericho tussled for a while. It was a lengthy sequence that did what it was supposed to, namely keep the crowd entertained and guessing as to who’d be the next out. Eventually Henry went for a splash from the second rope on both Swagger and Jericho only to miss. The Swagmeister than gave him a big boot which ‘The Highlight of the Night’ followed with a Codebreaker. ‘The Viper’ then returned to nail an elimination-gaining RKO to a thunderous pop.


The match chugged towards its inevitable conclusion with some slick exchanges between the remaining three men. Jericho eventually fell to an RKO after a nice series of finisher attempts and counters, with Swagger running in to surprise ‘The Apex Predator’ with a rollup immediately afterwards.


‘The Real American’ celebrated his victory by bellowing animalistically in the aisle. Orton stood in the ring looking shocked and disappointed. I hope WWE are going somewhere with this story. Orton pulled the same face at the Rumble. It doesn’t matter if it’s the predictable “I’ve lost my focus” routine, it just needs to go somewhere.


Swagger winning sets him up as the challenger to Alberto Del Rio’s World Heavyweight championship. We haven’t seen what WWE are doing with this feud yet but the dynamic seems promising. Swagger is the bigoted American who wants to “save” the country while ADR is the foreign hero who embodies the true principles of the USA. I hope WWE don’t mess it up, it could be great.


WWE deserves credit for the booking of the Chamber match. There were three credible choices for winner and it wasn’t at all clear who’d be leaving as the number one contender. Mark Henry seemed like a possibility for much of the match, and having Orton go down to a smashed door spot, immediately setting up a valiant comeback, made him look likely too. Swagger stealing the win in the way he did was also intelligent: he couldn’t have credibly lasted against or beaten Orton.


The show’s fourth match saw the babyface club of Sheamus, John Cena and Rybac tangle with The Shield. The match was about as good as I’d expected. It didn’t reach the heights of The Shield’s tables, ladders and chairs match last December but how could it have done? This bout was as good as it was going to be considering the lack of gimmicks and who was involved.


I’d predicted a victory for Rollins, Ambrose and Reigns but the finish of the match still surprised me: Ryback was going for the Muscle Buster on Rollins but got speared by Reigns, allowing Rollins to get the pinfall. I’d expected ‘The Celtic Warrior’ to take the loss for his team, keeping Cena strong for his ‘Mania collision and protecting Ryback’s dubious streak. If ‘The Human Wrecking Ball’ is going to face Big Show at WrestleMania he’s going to need some rehabilitation after this loss. 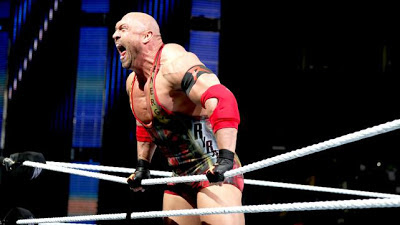 Who can stop this guy?! Erm... Seth Rollins...
Dolph Ziggler strutted out to remind us of his existence only to get booked in a bonus match by Booker T. His opponent was Kofi Kingston. This was a good match and all (because Kingston v Ziggler is never anything less) but it seemed a little pointless. Nobody seriously thought ‘The Wildcat’ was going to beat the company’s top rising star and the post-match beating Big E Langston administered was just burial for the sake of burial. Kofi could mean something if WWE worked out how to present him correctly.

Perhaps the most notable thing about the segment was Big E's new ring gear. A back view teased us with a wafer thin slice of buttock protruding from beneath the singlet. The front view appeared to be an explanation of the NXT champ's ring name.


A better use of this slot would have been to further the rivalry between Bo Dallas and Wade Barrett. They could have had a singles match that had a DQ or cheated finish to set up a rematch or Dallas could have been booked in a singles bout with ‘The Show Off’ and been cost a victory by Barrett. That would at least have accomplished something.


Kaitlyn successfully defended her Divas championship against Tamina Snuka in the evening’s penultimate match. It was the worst thing on the show, designed to calm the crowd back down before the main event hit. The women deserve better but they’re not going to get it until the division receives a restock.

The evening ended with the rematch between WWE champion The Rock and CM Punk. Punk entered with the title and had Justin Roberts announce him as ‘The People’s Champion’. Even that couldn’t persuade some members of the audience to boo him. That’s what WWE gets for putting a reliable worker into a main event scene that’s been dominated for so long by John Cena.


The main event was not good. Deprived of the shortcuts they’d used at last month’s Royal Rumble and lumbered with ‘The Great One’s’ diminished conditioning the two men set a sluggish pace featuring an overabundance of rest holds and stalling. Punk was on offence for the majority of the first three quarters, a good call considering his status as the more active of the pair.


Even Punk spitting in The Rock’s face couldn’t tip this match over the edge. The crowd reacted to it the right way, but within minutes the two wrestlers were back to stalling. 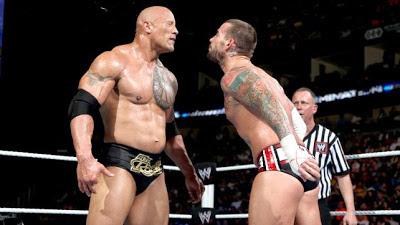 Rock closes his eyes and awaits a kiss
Things came alive in the final portion of the bout. Punk kicked out of a Rock Bottom. Chioda took a bump and Punk connected with a GTS on the champ to have the match won. Only there was no ref. This should satisfy any Punk fans that he can still claim a rematch in the future because he had the match won. Rock hit a spinebuster and a People’s Elbow, eventually getting a second ref to count the fall.


Punk kicked out at two. ‘The Second City Saint’ blasted Rock with a kick to the head and signalled for Heyman to get the title belt. Heyman slid that in and then grabbed Rock, holding him for a belt shot from Punk. The champ dodged (which was completely predictable) and then hit Punk with the match winning Rock Bottom.


Elimination Chamber was a show about lining things up for WrestleMania XXIX. That was fine, it’s something that needs to be done at some point and a pay-per-view is the logical place. But that doesn’t excuse the perfunctory feel EC 2013 had. Swagger’s win aside there was nothing surprising on the show. Could Triple H not have appeared to challenge Lesnar to a match? Could the Undertaker not have returned after the WWE title bout for a staredown with Punk? I’d even have accepted Cena’s music hitting after ‘The Brahma Bull’ had retained. The show going off the air with Rock and Cena shaking hands or pointing at a sign would have been more interesting that Rock’s solo posing.


The final match was the biggest disappointment. Rock and Punk didn’t match the pace they set last month. Which concerns me for WrestleMania XXIX. Rock and Cena had a lethargic battle at last year’s show. If they’re having a rematch this year (which, obviously, they are) they need to go hell for leather and make it a fast and physical battle. Based on Elimination Chamber The Rock’s not up to it. Which will mean a poor ‘Mania main event for the second year in a row.
Posted by Dave at 14:56