You may have noticed that Chris Jericho returned to WWE at the Royal Rumble. Unlike The Rock 'Y2J' is back full time, working house shows in addition to TV and pay-per-views. The deal is expected to last until WrestleMania or the post-'Mania RAW. Following that Jericho will be off on tour with Fozzy again.

The return of a versatile performer like Jericho gives WWE plenty of options for WrestleMania XXIX. It creates options for the weeks leading up to it too for that matter. As a face Jericho could be used to obtain decent efforts from the likes of Big Show and CM Punk. He could even be used to boost his fellow recent returnee Jack Swagger.

All three of those men would make great TV or Elimination Chamber opponents for Jericho but wouldn’t feel right as ‘Mania opponents. Punk and Jericho clashed in a (forgettable) WWE championship match at last year's sports entertainment extravaganza. Having them face off again a year later, even with the heel-face dynamic reversed, would be a boring waste. Meanwhile Big Show v Jericho doesn't feel like a 'Mania match. We've seen it so many times before and we know it will be a mess.

The reason I dismiss the idea of a Swagger v Jericho bout at WrestleMania is that there is such a gulf between the two. 'The All American American' returned last week to a half-hearted push and a (presumed) spot in the Elimination Chamber. He's back to make up the numbers on the heel side of the fence. Jericho has returned to be a reliable wrestler and a mild ratings draw. What he does at WrestleMania XXIX will be memorable. At this point no list of potentially memorable things for anyone on the WWE roster contains Jack Swagger in any capacity. 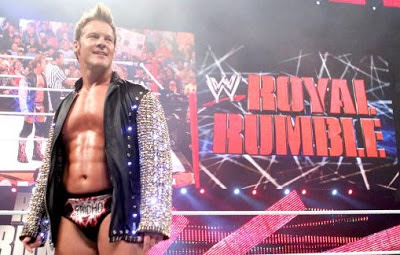 Still got it... Never lost it

Another possible use for Jericho is for him to tackle one of the two heel mid-card champions at WrestleMania. Jericho could wrestle a great match with either Antonio Cesaro or Wade Barrett. While I dislike former world champions challenging for and winning mid-card belts WWE has crossed that line so many times over the last decade that it can barely be considered an issue anymore. That particular unwritten rule went the way of the Oddities a long time ago.

Jericho putting over either Barrett or Cesaro at WrestleMania would give them a boost. As Jericho himself has pointed out he can lose every match he has between now and the end of his career and it won't affect his spot. He's over enough for wins and losses not to matter.

A programme with the master of the Bullhammer could refer back to their rookie-pro relationship on NXT season one, although the central reason for their dispute would need to be something more substantial and recent. Both are good enough on the mic to concoct something at least good in the six weeks between Elimination Chamber and WrestleMania.

There's a more obvious starting point for a Jericho v Cesaro rivalry. Namely 'The Swiss Superman's' boast that no American will beat him for his US championship. Jericho could announce the non-American stipulation doesn’t apply to him, as he’s from (Winnipeg, Manitoba,) Canada. That Jericho's held every active title except the United States title could probably be incorporated too. Hey, it was good enough for Big Show last year.

If 'Y2J' were to challenge for either of these belts he'd have to lose. To have him win a mid-card belt by defeating a prospect like Barrett or Cesaro would entirely miss the point of bringing him back.


A match that would be nice to see on ‘The Grandest Stage of Them All’ would be Jericho v Dolph Ziggler. The two had enjoyable matches last summer before Jericho left to play rock star. They resumed their rivalry at the Rumble and on the Janaury 28th RAW. They’ve not had a bad match yet. It would be a great, hot opener for ‘Mania.


It’s not likely to happen though. With ‘The Show Off’ insisting he doesn’t want to be a part of the Chamber match on February 17th it seems reasonable to assume he’ll tangle with Jericho on the show. If it happens that will be the blow off to their programme. They’ll be facing fresh opponents at WrestleMania.

A slightly more esoteric use of ‘The Highlight of the Night’ would be to have him rehabilitate the tag team division. This is yet another idea that won’t come to pass but it would be nice. Jericho and a babyface tag team partner who’d benefit from the exposure (such as Kofi Kingston or Zack Ryder) taking on Sin Cara and Rey Mysterio or Team Hell No would be a nice match to stick in the middle of the ‘Mania card. The Prime Time Players would be good opponents too, they’re just not quite as slick as the other teams that could be used.


There’s always the option of turning Jericho heel. I don’t necessarily think this is a move WWE should make. Jericho had been a bad guy for around five years until last summer. Switching him back now would be a waste. There’s more for him to do as a face than as a villain, and fans want to cheer him. But the turn remains an option.


If ‘The King of the World’ were to go bad there would be plenty for him to do. He could face Sheamus. That would be a fresh, if intensely dull, match. He could win the number one contenders Elimination Chamber and go heel before tangling with Alberto Del Rio on April 7th. He could wrestle a singles match with Daniel Bryan. A lot of people would like to see that.


The obvious opponent for a heel ‘Y2J’ would be Ryback. It’s easy to imagine Jericho taunting ‘The Human Wrecking Ball’ for weeks on end, running away whenever he’s close to getting caught. A match between the two would need to be quick. Jericho could maybe stall for a bit but would need to go down to a Muscle Buster as soon as Ryback got a hold of him.


Look back on Jericho’s (one-sided) WCW programme with Goldberg for the sort of thing that could be used to keep this going. Oh, and have a glance at the episode of SmackDown where Jericho sealed himself in a cage to taunt Ken Shamrock too.

Of course it’s not just wrestling ability that Jericho brings to WWE. He’s known as a good promo man, his charismatic performances in that area could be valuable if he were placed into a feud with someone less skilled. Even away from advancing rivalries it’s a useful skill. The Highlight Wheel could be revived to pad out some of the three hour RAWs we’re still being forced to endure.


Whoever Jericho ends up facing at Elimination Chamber and WrestleMania, and on the RAWs, SmackDowns, Main Events and house shows (or is that live events?) in between, it’s good to have him back. He’s an entertaining, charismatic wrestler who understands his role in the promotion. Wrestling needs more guys like him.