Rejoice, for Jack Swagger is back on WWE television!


This week’s SmackDown played host to the return of ‘The All American American’, who had been absent since last September. Swagger revealed he’d been sitting at home watching “everything”. That was probably meant to mean RAW, SmackDown, Main Event and all the pay-per-views but the way Swag delivered the line made it seem as though he had ascended to the level of omnipotent super-god and spent the last five months observing everything that transpired on the entire planet.


Swagger had been roped back onto TV by Senior Advisor to the SmackDown GM, Teddy Long. Teddy apparently felt that Swagger deserved a spot in the Elimination Chamber match Booker T was putting together, despite not actually having been seen in months. Said Chamber bout will determine who wrestles for the World Heavyweight championship at WrestleMania. It’s a high profile spot so Teddy deciding to go behind his boss’s back to bring in someone who hasn’t been seen in months is peculiar. Perhaps we had Eve wrong and it’s been Teddy who’s been scheming to get Booker’s job all along. 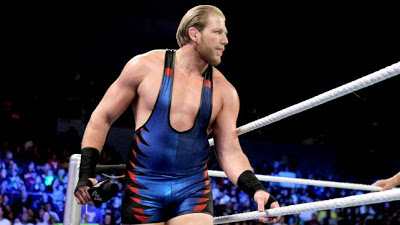 It's the return we've all been waiting for!
The names of the men in this match were not disclosed. Randy Orton, Sheamus, Daniel Bryan, Kane, The Great Khali, and Dolph Ziggler were all at ringside as the show began, with the Swag Man joining them later. ‘The Show Off’ said he didn’t want to be involved in the Chamber match due to having a guaranteed title shot thanks to his Money in the Bank briefcase. We were left to assume that some or all of these men would be involved in the match.


That Booker made a point of mentioning all of the men at ringside are former World champions means that could be important to his criteria, perhaps hinting that Rey Mysterio or Chris Jericho could be entered too. I hope at least one of them is. Right now it’s looking as though Sheamus will be in a six man tag team match against The Shield, leaving Orton, Bryan, Kane, Swagger and Khali to tangle inside the cage with a mystery sixth man. That’s not the most impressive line-up for an EC match ever.


The show was dedicated to giving the former World champions the chance to impress Booker T. He was easily impressed: not one of the matches we saw was anything more than average and yet Book was shown to be very excited by Khali’s effort, which was easily the worst thing on the programme.


The most noteworthy things about this episode of SmackDown was what it implied for the Elimination Chamber PPV. As the SmackDown Chamber is a non-title affair it’s safe to assume that the belt will be defended elsewhere on the show. That Alberto Del Rio’s feud with Big Show is still chugging along, coupled with the fact that ‘The Giant’ wasn’t mentioned in conjunction with the cage collision itself, makes it a safe bet that the two will face one another for the strap.


Wade Barrett attacked Bo Dallas backstage. Dallas, the rookie, had made the mistake of talking to two vaguely attractive women within sight of the IC champ. It’s looking very likely that the NXT boy will get a title shot at Elimination Chamber. A completely random guess is that Barrett will cheat to win there and Dallas will win a rematch at ‘Mania.


Meanwhile Rey Mysterio getting the pinfall win in his tag match was likely a move made to create a legitimate reason for his inclusion in the Chamber bout. He’s not been on television for months. It would seem odd even by WWE standards for him to waltz back onto TV straight into a match that could earn him a WHC shot. Well, it would if Jack swagger wasn’t being given that same opportunity without earning it…


One final thing to note about this week’s SmackDown is that it marked the end of the Rhodes Scholars tag team. I thought Sandow and Rhodes worked really well together as a unit and had a lot left to offer in the role. They had deserved a reign as the tag team champions. I assume they’ve been split in order to free Rhodes up for a WrestleMania clash with half-brother Goldust. That match could be good.


The reaction the two had when they battled at the Rumble indicates that fans want to see that match. But it shouldn’t be coming at the expense of one of the most entertaining pairings the company has had in years. There was no reason the Scholars couldn’t stay together while Cody had a singles feud. Once again the tag team division is a casual disaster of the writing team’s short attention span.


Tweet 5: Booker and the (SmackDown) main event crew are in the ring. Also present are Senior Playa Teddy Long and The Great Khali.
Tweet 6: Elimination Chambers are, in the words of Booker T, spectacular.
Tweet 7: Jack Swagger! Yes! Yes! Yes! Yes! Yes! Yes! YES!!
Tweet 8: He's got a mic! This should be... spectacular.
Tweet 9: Swagger left RAW in disgust at his misuse last year. What's he done to reinvent himself? Grown a rubbish beard and slicked his hair.
Tweet 10: Ziggler don't want NO part of the EC. No, sir.


He has a briefcase, there's no need for a Chamber ticket here

Tweet 11: "The champ, he's in a real bad mood" - Booker T, who has clearly seen what Del Rio's wearing
Tweet 12: To get into the Chamber you need to "impress" Teddy and Booker. No criteria were mentioned. Presumably you win. What else?


Tweet 13: Who is this child? Oh, it's Rey.
Tweet 14: What happened to Cara's special lighting?
Tweet 15: "He will bewilder and befuddle his opponents" - Josh Mathews on Rey Mysterio
Tweet 16: I like Sin Cara's outfit more than his regular bland attire.
Tweet 17: I also like Booker including Sheamus and Khali in his conglomeration of champions and omitting Mysterio and Jericho.
Tweet 18: That's what we need from a WWE General Manager.
Tweet 19: Meanwhile we have a strange match going on. The face versus face dynamic isn't the problem, it's Kane's dwarfing of his foes.
Tweet 20: Going back to Cara's outfit: it puts me in mind of a newt. A sinister newt.
Tweet 21: Kane being so much larger than everyone else in this match is jarring. I can't get passed it. He should be a heel here. But he's not... 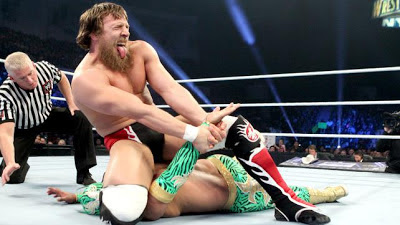 A goat versus a newt

Tweet 22: Great exchange between Mysterio and Dragon there. They deserve a singles match on pay-per-view.
Tweet 23: Josh has fallen into the JR habit of loudly saying a wrestler's name in place of actually saying what’s happening.
Tweet 24: The role of WWE announcers is not to call matches anymore. It is to comment wryly on the insanity taking place before them.
Tweet 25: "I've never seen Rey Mysterio look better" - JBL, who clearly isn't familiar with Rey's work


Tweet 26: THE GREAT KHALI CAN'T EVEN WALK CONVINCINGLY!
Tweet 27: It's the long awaited resumption of the Khali v Jinder Mahal feud! I'm astounded this wasn't kept for WrestleMania.
Tweet 28: Jinder should grow in a 'tache. It would fit his low card role well. Probably get him heat with Cody though.
Tweet 29: Khali literally has no idea what he's doing. He looks like he's trying to take flight.
Tweet 30: Why are they on TV every week? WHY?!


Tweet 31: BOOKER WAS IMPRESSED BY KHALI'S GREATNESS!!
Tweet 32: Teddy Long had the idea to bring back Swagger. There is a reason he's kept around after all.
Tweet 33: Damien Sandow quoting Albert Camus there.
Tweet 34: No more Rhodes Scholars? Dreadful decision. Dreadful.


Tweet 35: Sheamus comes out. He looks like a bleached pumpkin with terrible facial hair.
Tweet 36: I'm a big fan of Sandow but even he can't make me interested in a Sheamus match.
Tweet 37: Sheamus's matches consist of punches and kicks, punctuated by the occasional knee and his tedious ten punch spot. There's no charisma.
Tweet 38: But what Sheamus lacks in the charisma department The Shield make up for. Well, Ambrose and Rollins do. I'm not convinced about Reigns yet.
Tweet 39: The crowd are chanting for Ryback. There's no sign of him. Perhaps he doesn't like Sheamus. Or Irish people in general.
Tweet 40: Nobody helped Sheamus. He is staggeringly unpopular even in the locker room.


Tweet 41: BARRETT RING COAT ALERT!!
Tweet 42: Bo Dallas is another guy from NXT that I'm not particularly keen on. He has the hair and entrance music of a nondescript indy guy.
Tweet 43: Wade Barrett elbows a steel ring post. Nothing is broken. Why? Because he's a WRESTLER, dammit!
Tweet 44: Barrett loses clean to the RKO. I suspect that rumour about Orton turning heel because of a clean loss to Barrett on RAW was and is rubbish.


Tweet 47: Jack Swagger has retired the push-ups and "crossing the line" spots from his ring entrance. He's retained the face slapping though, natch.
Tweet 48: Swagger's hair, when ruffled, makes him look like a manic rabbit.
Tweet 49: JBL thinks this average match against a mid-card wrestler is a great showing for Swagger. He is completely and utterly wrong.
Tweet 50: Swagger wins with the ankle lock. Somewhere in Florida Kurt Angle has a fit.

Tweet 51: Why is Big Show arriving at the show twenty minutes before it finishes?
Tweet 52: Big Show is seven feet tall and weighs nearly 500 pounds. He is standing on a car. Is this a comedy segment? 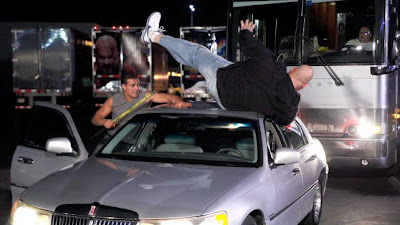 Lovely bit of comedy selling from Big Show there

Tweet 53: Show escaped the psychotic World champ by stealing a car. Still no idea why he showed up.
Tweet 54: Why are ADR and Ricardo talking to each other in English?


Tweet 55: No Ricardo Rodriguez to introduce Del Rio. We have to make do with... urgh... Lilian Garcia.
Tweet 56: Alberto Del Rio.
Tweet 57: Who wears short shorts? Big E wears short shorts.
Tweet 58: "Del Rio, the mastermind behind that superplex" - A complete sentence from Josh Mathews, who may as well just be spewing random words
Tweet 59: Fameasser!! #BadAssBillyZiggler
Tweet 60: Del Rio looks astonishingly bored. It borders on the hilarious. That's your babyface champion, folks!
Tweet 61: Ziggler taps to the cross arm breaker. Because Ziggler NEVER wins.
Tweet 62: Oh no! Big Show's back! And he's captured (yes, captured) Ricardo Rodriguez!
Tweet 63: Ricardo has been lamped again.
Tweet 64: The show goes off the air with ADR asking an unconcious man to speak to him. It is a low point.
Posted by Dave at 11:50