So the WWE developmental league now has better tag team champions than the main roster does. I can’t be the only person this doesn’t make sense to? I mean it’s nice that WWE wants to prepare some double acts to be called up at some point in the future but shouldn’t they also be concerning themselves with the ones they already have?
The current WWE tag champs are Kane and Daniel Bryan. They’re an odd couple unit whose limited shelf life expired months ago. They remain the champions because there are no realistic alternatives. The Rhodes Scholars were senselessly split a couple of weeks ago, although if the Elimination Chamber pre-show match is anything to go by that decision may since have been reversed.


The Prime Time Players remain intact but if they were to become champions who would oppose them? It’s difficult to imagine anyone getting excited about a tag title feud involving Jimmy and Jay Uso, isn’t it?


My point here is that if the work being done creating tag teams for NXT is to prove beneficial in the long run then some more makeshift units need to be lashed together for the short term. Get some singles guys doing nothing into the tag ranks and let them hold the fort until Adrian Neville, Oliver Grey and the Wyatt Family are deemed ready for the big time.


Let’s overlook the bleak long term future of the tag teams on NXT. I thought the tournament final was a very good match. The four men were given plenty of time to construct something worthwhile and tell a story. They fell down a little on the narrative side of things but the action was enough to carry them through. 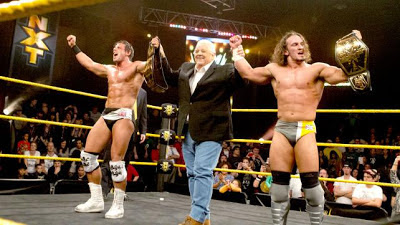 The new champs
The most disappointing thing about the match was the early ejection of Bray Wyatt. Not only is he the group’s namesake and manager, he’s also its biggest star and the man who will go farthest in WWE. He should have been at ringside to keep the crowd involved. If he had to be thrown out then it could at least have been held off until the closing moments.


Elsewhere on the show the feud, over prettiness, between Paige and Summer Rae continued. They had their first televised match after a brawl at the start of the show. Ironically it was not pretty. Part of the reason for that was that Paige was wrestling as though she had an injured shoulder. She’ll recover from that within a few weeks and then get her inevitable rematch victory.


Tweet 5: "I'm Tony Dawson!" - Tony 'I'm Tony Dawson' Dawson
Tweet 6: Impromptu run-in from Paige. Now she's on the mic, sounding like she's about to ruddy cry.
Tweet 7: I really wanted to see Mike Dalton v Axel Keegan too (are those their names?)...
Tweet 8: ISS THA DREE, BAYBEE!
Tweet 9: Is Dusty going heel? This is the turn of the decade!
Tweet 10: That all felt very ECW.


Tweet 11: Doctor Sampson is "examining" the shoulder of Paige, is he? Looks inappropriate to my (admittedly untrained) eye.


Tweet 12: It's Alex 'Future Endeavors’ Riley!
Tweet 13: You've got to love a guy who wrestles in suspenders.
Tweet 14: If you ever watch this match look out for the inverted atomic drop reversal sequence a minute or so in. Massively sloppy.
Tweet 15: Dawson just announced the "breaking news" that Paige v Summer Rae will happen next. Wasn't that announced last week?
Tweet 16: Everything A-Ry's done in this match shows that WWE were right to take him off the main roster.
Tweet 17: The man who looks like an 80s game show host tapped out. Good. Graves is better. 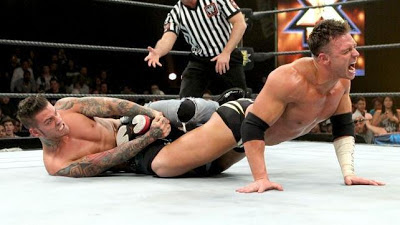 If only Riley's pain were real
Paige backstage again


Tweet 18: Paige is still backstage with that questionable doctor. Getting her shoulder taped so she has an excuse when she loses.


Tweet 19: Summer Rae, also known as Kelly Kelly 2.0.
Tweet 20: Paige should enter to the theme tune of Big Break. To play up her British roots.
Tweet 21: Paige just did the old stomping a mudhole routine. Earlier on she did a Thesz Press. Just shave your head bald and call yourself Austin, luv.
Tweet 22: While I was typing that Summer Rae won. That was pretty short. There'll be a rematch. Hopefully it'll get more time.


Tweet 24: Backstage Sasha Banks reads a poem aloud. That'll get her over. No wrestling fan can resist a bit of poetry.


Tweet 25: Byron Saxton's on ring announcing duty. He's basically the NXT version of Borash.
Tweet 26: "The whole of England will be celebrating, it's wonderful for my country" - William Regal on the possibility of Brits winning NXT tag belts
Tweet 27: Contrary to what Regal said I want to see the Wyatts win. I do know the result by the way...
Tweet 28: "The British have been underdogs for thousands of years" - William Regal
Tweet 29: I'm pretty sure both Neville and Grey are younger than me which means it's pretty unlikely they grew up idolizing the British Bulldogs.
Tweet 30: Bray's gone from ringside. This match just got a bit less interesting.
Tweet 31: What's Dusty actually doing at ringside? I mean, I know he's watching the match, but physically what is he doing?
Tweet 32: I want them to keep cutting to Dusty nodding or pursing his lips, maybe cocking his head to one side.
Tweet 33: If you've gone to the trouble of having a living melted waxwork at ringside at least show him to us.
Tweet 34: Rey Mysterio should be sent down to NXT. He doesn't need to learn how to work, he needs to learn how to show up to work.
Tweet 35: Look at Adrian Neville. Running around like a ruddy lunatic.
Tweet 36: If beards play a factor on membership then I think Daniel Bryan could be a future acquisition for the Wyatt Family. 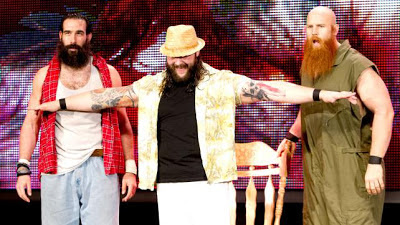 Tweet 37: Neville and Grey have won. To their credit they're celebrating like it means something to them. It was an enjoyable match.
Tweet 38: Dusty's in the ring to shake and raise hands. You know you've made it when 'The Dream' wants to touch you.
Tweet 39: Well... it could just mean you're a woman.
Tweet 40: Fans cannot understand the post-match squealings of the new champs. I can barely make out what they're saying and I'm used to the accents.
Tweet 41: Where's Triple H? Does he only appear for singles champions? Selfish.
Tweet 42: The show goes off the air with the new champs standing on the stage holding their belts, which are better looking than the NXT singles belt.
Posted by Dave at 10:01