Since the last time I did an NXT recap there have been a few changes on the show. Seth Rollins has dropped the NXT championship and joined the main roster as part of The Shield. The man he lost his prize to, Big E Langston, has also joined the main roster, working as a bodyguard for World Heavyweight champ in waiting Dolph Ziggler.


Where Rollins has switched from face to heel in his promotion Langston has done the reverse. Except that in the bubble universe that is NXT he remains as popular as ever. He’s still the developmental league’s number one good guy, obsessed with the number five.


Former indy standout PAC has signed a WWE developmental deal and debuted under the decidedly pedestrian name of Adrian Neville. Perhaps the name is supposed to provoke an image of a nondescript footballer. It certainly doesn’t conjure up an image of a WWE sports entertainer. Nor, for that matter, does it conjure an image of a man capable of the impressive flying manoeuvres the man from Newcastle is known for. Hopefully he’ll get a gimmick overhaul before hitting RAW.


Oh, and on the subject of RAW let’s hope Neville has started getting rid of his accent before he turns up there. The British have a hard enough time understanding Geordies. I dread to think how the Americans will cope.


Another newcomer since my last recap is Oliver Grey. He’s another product of the British wrestling scene, although he’s not had anywhere near the international exposure and success of Neville. The two have formed a tag team based, apparently, solely on the fact that they’re both British. It’s as good a reason as any, I suppose.


Speaking of tag teams probably the biggest change since my last NXTweet is the introduction of NXT tag team championships. My personal tastes for any wrestling promotion (and to all intents and purposes NXT is a promotion that stands alone form WWE) are to see a singles championship and a tag team championship. I can take or leave a mid-card belt, usually only thinking they’re worthwhile if there’s a particularly deep roster in place (ROH, for example, definitely doesn’t need a TV title right now).


The thing with NXT is that there aren’t really that many teams available, which means some had to be tossed together to make the tournament work. Kassius Ohno and Leo Kruger are a perfect example. Had they reunited the Kings of Wrestling I would (naturally and predictably) have been all for it. Cesaro and Ohno have a history together. Even if it hadn’t been acknowledged a fair number of viewers would have been aware of it. Kruger and Ohno are two singles guys who hadn’t had any interaction with one another before the tournament started. Yet they’re deemed worthy of wrestling to become the first ever tag team champions.


Basically there was no need for the tag belts. With The Ascension gone (there’s another change: Conor O’Bria has gone solo after Kenneth Cameron (another Brit) was released from his contract last year) and the likes of Epico and Primo, former WWE tag champs but basically jobbers, roped in to make up the numbers alongside random units like Ohno and Kruger, there just isn’t a desperate need for doubles gold in NXT.


That said I don’t think it’s a bad idea. It could indicate that WWE have a long term plan to reintroduce tag team wrestling as a serious part of their programming again. Considering the likes of Shawn Michaels, Bret Hart, Edge, and Jeff Hardy all got their starts in tag teams. That should be indication enough that keeping the doubles ranks nicely stocked is a good move.


Tweet 1: NXTweet.
Tweet 2: Tag team title tournament semi-finals on tonight's show! For the record I think it's a GREAT idea to get tag belts for developmental...
Tweet 3: ... Especially when the main roster has, like, three teams. It's brilliance! #sarcasm


Tweet 4: It's Kassius... OHNO!!
Tweet 5: Did he just do a moonwalk? Whatevs. Even if he did this team is no KOW.
Tweet 6: And their opponents: two British blokes.
Tweet 7: Yeah, good luck with making the Americans undertand your promos there, Adrian.
Tweet 8: Another note for the record: I like Ohno's blue trunks.
Tweet 9: Something I don't like is this bland commentator pronouncing Kassius as "Cash-ee-us."
Tweet 10: Kruger dresses like a member of The Shield. He's secretly a member. Leo 'The Secret' Kruger.
Tweet 11: 'South Africa's Best Kept Secret' Leo Kruger. 'Mr Secrecy' Leo Kruger.
Tweet 12: WWE management go out of their way to portray themselves as the only wrestling company in the world most of the time.
Tweet 13: Which means it feels odd when they have their commentators talk about wrestlers having travelled the world.
Tweet 14: Why does it matter? They're finally in WWE, competing on the prestigious NXT! Surely this is the highlight of their career?
Tweet 15: They're signing British guys now so where the HELL is James Tighe? Does he still work? I've not seen anything on him for years.
Tweet 16: Triple H and Shawn Michaels weren't a great team. They did some funny promos and were good singles guys. As a team? Average.
Tweet 17: "He just looks proper mental... He is" - William Regal on Leo Kruger
Tweet 18: I've not tweeted much about the content of this match. It's slow but very good, the kind of match you the main roster would avoid.
Tweet 19: "Regal, do you see this?!" - Kassius Ohno as he grabbed Adrian Neville's mouth guard
Tweet 20: I want to see Regal v Ohno.
Tweet 21: Good match. It didn't get particularly quick but it was satisfying. 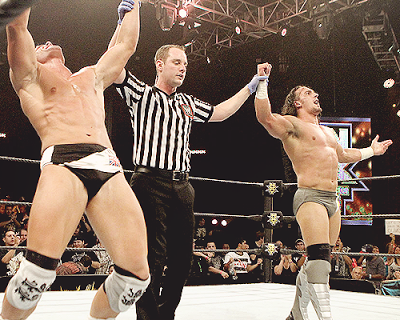 Adrian Neville is practising his singing


Tweet 22: Summer Rae thinks she's the prettiest Diva so she attacked Paige. Yeah, that's right. This feud is about prettiness.
Tweet 23: "Summer school's always in session" - Summer Rae with a comment that played on her name but did little else 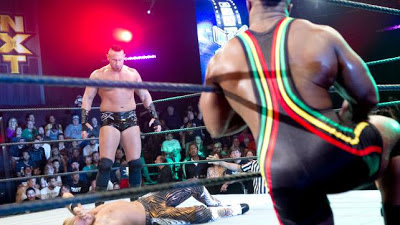 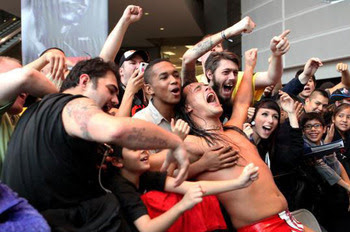 
Tweet 39: The Wyatt Family clearly have membership cards at Beards R Us.
Tweet 40: For those who missed the memo Michael McGillicutty is now a face.
Tweet 41: The Wyatt Family remind me a little bit of the DOA. They were on Metal practically every week in the late 90s. They bored me.
Tweet 42: The Wyatt Family don't bore me though. I'm generally a fan of cult gimmicks in wrestling.
Tweet 43: Remember Raven's Serotonin group in TNA? I thought that had loads of potential.

Tweet 44: Post-match beating from Bray Wyatt to Bo Dallas there. Husky stuff.
Tweet 45: The show ends with Bray Wyatt sitting in a rocking chair and his boys staring listlessly into the camera. Darn enjoyable show.
Posted by Dave at 16:19