Swagger Versus The Rock

Considering The Rock’s status as a pretty big deal in Hollywood it's surprising that the US media haven't made more of his recent WWE championship win. Don't get me wrong, I didn't expect it to be on the front covers of papers or topping evening news rundowns but I thought there'd be a little more interest than there has been.

It's not The Rock's fault (nor is it Gene Snitsky’s). He's done everything that could be expected of him, including tweeting pictures of himself with the belt from whatever film set he happens to be on on any particular day. He is proud of his association with the wrestling company (and he should be, they're paying him enough) but that doesn't naturally equate to interest from the media.

As big a name as 'The Great One' is there's a member of the roster who's managed to net WWE more media coverage in the last couple of weeks. His name is Jack Swagger.

In case you haven't heard Jack Swagger was repackaged as an ultra-right wing zealot a few weeks ago. His ankle lock finisher was renamed the Patriot Act, he was given a xenophobic manager, and he started bellowing "We the people!" in what is supposed to be a rallying cry that will unite American citizens.

It is, predictably, the xenophobic manager and his comments regarding the cultural diversity of America that's garnered negative attention. Conservative news haven FOX, along with various other media outlets, have dedicated time to Swag's new direction claiming that it is WWE's attempt at undermining various right wing political movements. A radio host named Glenn Beck has been particularly noteworthy for his outrage at the characters.

In fairness to WWE they're clearly not trying to undermine the right. If the politics of Vince McMahon weren't a dead giveaway the fact that WWE has many prominent culturally diverse employees and viewers shows that undermining any political movement isn't their goal. It's a distasteful, old fashioned approach to wrestling antagonism but it’s not a reflection of the company's political ideology.


Swagger and Zeb Colter are playing villains designed to get a negative reaction from audiences. Nobody living in democratic 2013 is supposed to agree with them. They're the bad guys. A video, partly in character and partly out of it, was posted online on Friday explaining all of this far better than I ever could. View it here. 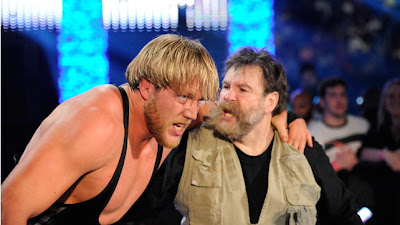 More interesting than The Rock

After last Tuesday's SmackDown taping Swagger was arrested for possession of marijuana and driving under the influence. It was unfortunate timing, coming just as the biggest push Swag's had in years was getting underway. Usually this news would almost certainly result in a suspension or perhaps even a firing. Either one of those reactions would necessitate a major reworking of the World Heavyweight title feud for WrestleMania.

What's interesting is that at time of writing WWE hadn't announced any formal repercussions against 'The All American American'. They’d actually continued publishing videos furthering the Swagger and Colter storyline via YouTube accounts. It's possible they're waiting until RAW's been and gone. That would allow Swagger to appear on the show to be written out of storylines.

I don’t think that’s likely. It’s possible WWE may be willing to overlook Swagger’s transgression on this occasion, or at least punish him in such a way as to allow the WrestleMania rivalry to continue interrupted. As he's providing the company with their best source of media coverage they're going to be unwilling to take Swagger off of television. Replacements for the WHC match spot can easily be found in the likes of Randy Orton, Sheamus, Mark Henry, and Dolph Ziggler. Finding someone to replace Swagger as a media magnet will prove far more difficult, as The Rock has so ably demonstrated.
Posted by Dave at 14:02