Ever since the Elimination Chamber was granted its own pay-per-view in 2010 there have been two such bouts per year. It's harmed the importance of what should be a rarely used gimmick bout. It's also cluttered up the once clear path from the Royal Rumble to WrestleMania, with the writing team forced to incorporate two multi-man matches that have rarely been the most logical way to advance plots.

Thankfully this year's show will feature only one of the titular matches. That's a definite step in the right direction. Less is more.

WWE will break from tradition because of The Rock. Putting him in a Chamber match would not be without its merits. Most obviously it would allow five regular members of the roster to work with 'The Great One' as opposed to just one. It could be accurately marketed as Rock's first jaunt inside the Chamber too.

That said it makes far more sense to go with a rematch from Royal Rumble, with The Rock defending against CM Punk. Their match at the Royal Rumble is believed to have drawn around half a million pay-per-view buys. For a WWE show not named WrestleMania that's a fantastic number. A rematch won't do quite so well, because nobody believes the championship will change hands again, but it should still be above average for a WWE event.

Monday's RAW revealed a stipulation for this match. If The Rock gets counted out or disqualified Punk will win the title. It's a strange ruling that deprives the two of many of the shortcuts that made their Rumble match so enjoyable. At least it makes sense regarding who it favours though: Punk, as the heel, should be the man to have an unfair advantage in this one.

I can't see the WWE championship changing hands before WrestleMania. I especially can't see Punk regaining it. What would be the point of having him lose the belt to The Rock, ending his vaunted reign, only to win it back three weeks later? To fool the fans? I think even WWE would find it hard to justify that at their most financially lucrative time of year. 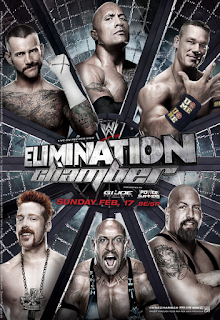 These six in a Chamber match would be interesting

The man that will face the winner of Punk v Rock II is John Cena. He will spend his evening teaming with Ryback and Sheamus to take on The Shield. If the Tables, Ladders and Chairs match Ambrose, Rollins and Reigns were involved in last December is anything to go by this match could be excellent.

Of course that's not an entirely fair comparison. At TLC the justice deliverers had Daniel Bryan and Kane amongst their opponents. Bryan is regarded as one of the best wrestlers in the world while ‘The Big Red Machine’ is skilled at elevating his opponents. Cena, Sheamus and Ryback can’t compare to Kane’s skills, and they certainly can’t compare to Bryan’s.

On the plus side Ryback was involved in the TLC match in question, and wasn't just a passenger. The match was laid out to give him moments to shine as well as it was The Shield. If the same holds true for the six man tag team match it could be pretty good.

I'm not going to get by hopes up for more. 'Great White' is one of the most uninteresting, unengaging babyfaces I've ever seen in any wrestling promotion. And Cena is Cena. Unless he learns how to sell effectively before Sunday night I don't think this match will do The Shield as much good as their debut. I’m hope for a lively tussle. Anything more will be a bonus.

The result could go either way. The faces could win to keep Ryback strong and protect Cena for WrestleMania. Or the heels could go over to show that they're a more dominant faction and keep them interesting for another six man outing at WrestleMania. There's no reason to favour one option over the other, but I'm picking The Shield to win because I think they'd benefit more from it.

Bulking out the middle of the card are matches for the United States and Divas championships. I’d like to see Cesaro retain against The Miz. A title change wouldn't really benefit either man at the moment. It would be best to keep 'The Swiss Superman's' lengthy reign going. Miz, being awesome and all, doesn't need a strap right now.

The Divas title match is likely going to be brief. The women's division hasn't been in this bad a state since I first started watching wrestling and Sable was the only pushed female performer. I'm going to assume there's some sort of DQ finish that sets up a rematch at WrestleMania. The ladies always get a token match. A dodgy finish to set up a rematch is as good a way as any of getting it established.

There's also the pre-show match to discuss. Despite announcing their split as a team a few weeks ago on SmackDown the Rhodes Scholars will take on Brodus Clay and Tensai, collectively billed (apparently) as The Monsters of Funk. It's strange that WWE went out of their way to have Sandow and Rhodes discuss their split when there was clearly nothing else planned for them. Backtracking makes the company look foolish. That aside it's good the decision’s been undone for now. In the absence of something to do in the singles ranks it’s the best use for both men. Scholars to win.

I wouldn't be surprised if Wade Barrett v Bo Dallas got added to the show. Their issues started at January's Rumble show and have received a surprising amount of air time since. WWE seem to want to establish Dallas as a star. If it happens I'll assume Barrett cheats to retain. I'd say they'd do a 'Mania rematch but I can't see those two being lucky enough to be in anything other than a multi-man match at the bigger show.

One match that definitely will be happening is the Elimination Chamber. The entrants will be Chris Jericho, Mark Henry, Daniel Bryan, Kane, Randy Orton and everybody's favourite borderline racist Jack Swagger. As ever with a match that features a number of competitors it's tough to accurately pick a winner.

What helps here is remembering that the winner will wrestle for the World Heavyweight championship at WrestleMania. To me that immediately rules out Bryan and Kane as potential victors. I think they're either going to be facing one another or losing the tag straps at 'Mania.

That leaves Jericho, Orton, Henry and Swagger. 'Y2J' strikes me as unlikely for no other reason than I just don't think WWE would use him against either Big Show or Alberto Del Rio at a WrestleMania. So, really, there are three possible winners in my eyes. But three’s still half the total number of competitors.

'The World's Strongest Man' has been made to look very dominant in the two weeks he's been back. He blasted his way through Sin Cara, Daniel Bryan and Rey Mysterio when he returned and is credited with the latter's latest absence from TV. He overpowered Khali on RAW which, in WWE World, means a lot. It seems that he's being prepared for something. That could very well be another run as a top line monster and a WHC match with ADR.

'The Viper' has been doing nothing of interest since his feud with Christian ended in 2011. Unless you want to count his rivalry with Mark Henry (also in 2011), of course, but I don't. Orton could be a good opponent for either Show or Del Rio. If he were to face 'The Giant' then the match could be given a David versus Goliath flavour, with Orton battling away as the underdog. A match with Del Rio could be used to instigate that much ballyhooed heel turn. Facing Orton would give ADR's reign more legitimacy than his never ending cycle of matches with Show ever will.

Then there's Jack Swagger. When he came back at the start of February I assumed he was making up the numbers. The reveal of his new manager and xenophobic attitude on RAW has made me re-evaluate this view. After all, who better to face a proud Mexican champion than a rabidly pro-American heel? It's an inversion of the classic pro-American babyface versus crafty foreign heel dynamic.

Perhaps it's a little too obvious, a deliberate attempt by WWE to distract us from their real plans, whatever they may be. In a way I like that because I think wrestling's at its best when surprising the audience. I wouldn't mind seeing Swagger face ADR though. I think it would be a fresh, interesting match. So I'm going to predict a Swagger win.

With that said it should be obvious who I'm picking to win the World Heavyweight title match. No matter who ended up in the Chamber I was never going to pick 'The World's Largest Athlete'. If he were going to go into WrestleMania XXIX as champion he never would've lost the belt in the first place.

It's strange that this match, the second PPV outing and third major match of the feud, is being fought under regular rules. Usually you'd start off with normal rules and build to gimmick matches. The reverse has happened with Show and ‘The Essence of Excellence’. But this is WWE... and anything can happen in (the) WWE!

Elimination Chamber is going to be hard pressed to deliver the sort of number it's believed the Rumble did. But with The Rock and CM Punk's title rematch and a Chamber match there's every chance this card could be a surprise financial success. Entertainment-wise it's already looking like another hit. If WWE carries on like this WrestleMania should be very good indeed.

Predictions summary:
The Rock to defeat CM Punk
Jack Swagger to win the Elimination Chamber
The Shield to defeat John Cena, Ryback and Sheamus
Alberto Del Rio to defeat Big Show
Antonio Cesaro to defeat The Miz
Kaitlyn to retain against Tamina via DQ
Rhodes Scholars to defeat The Monsters of Funk
Posted by Dave at 20:43