When TNA announced they were cutting back on the number of pay-per-views they produce one of the reasons they gave for the decision was creating a schedule that would allow storylines to advance at a more natural pace. In theory that should work. A promotion putting on fewer large shows is not beholden to having two feuding parties wrestling every four weeks. Things can be teased out and foreshadowed because there's less need to fill up so many minutes of PPV.


The move should have led to tightly produced events stacked with must-see matches. It hasn't. Slammiversary, like Lockdown before it, has a handful of reasonably intriguing matches to offer but the card as a whole is underwhelming.


If TNA are incapable of cobbling together four excellent cards a year then I don't see that they can have much of a future. Any company with a roster of talent like theirs and a half decent TV deal promoting four pay-per-views a year should be able to make them great. Making them profitable is a different story of course, but the quality should be there.


Let’s start with the use of the main event crew outside of the world title bout. Kurt Angle and AJ Styles are facing one another in a regular singles match. There are no stipulations and it seems the only reason it's happening is because of AJ's questionable loyalty to the company.


The two will have a great match but is this really the best that could be cooked up for two of TNA's best wrestler with three months to play with? They've faced each other so many times, often on free TV, that something extra needs to be added to their battles at this stage. Either an interesting story (which Aces and Eights emphatically isn't) or a stipulation they've not done before. If you want to use the two as the second biggest match of a pay-per-views fans need to be given something they've not been given before.


I'm expecting 'The Phenomenal One' to win. He's going to challenge for the world title later in the year. He'll need to be kept strong for that.


The treatment of Bobby Roode, James Storm, Austin Aries and Christopher Daniels has been similarly shabby. A year and a half ago 'The Cowboy' and 'The It Factor' were gracing the main event and 'A Double' was winning the TNA championship. It felt as though TNA was finally giving us the storylines and pushes we'd wanted for a long time. The younger guys on the roster were getting the featured spots and carrying the top championship.


In just twelve months that's all been undone. All three have been demoted to the tag ranks after showing so much promise as headline singles performers. The popularity of Christopher Daniels' heel character has frustratingly not been capitalised on. Instead the writers have focused more on the tiresome antics of Hulk Hogan, Brooke Hogan and Bully Ray. Even Taz has had more of a push than Roode and company.


Unlike Styles and Angle I'm not sure these horribly under-utilised wrestlers will manage to turn in a good performance. There will be eight men in one match, one of whom is clumsy oaf Hernandez. My concern is that too many spots and sequences will be stuffed into too short a run time. The elimination rules won't help the pacing either.


Anyone could win this. There's no obvious outcome. I'd like to see Bad Influence win. That would allow, Aries, Roode and Storm to segue back into singles careers and make use of 'The Fallen Angel'. So I'll pick them.


The returning Jeff Hardy will team with Samoa Joe and Magnus to take on Aces and Eights members Wes Brisco, Garrett Bischoff and Mr Anderson. The best thing I can say about this match is that it’s a very good way of elevating Bischoff and Brisco. Teaming with Anderson isn’t really anything special but getting to wrestle opposite Joe and Hardy on a pay-per-view is a big thing for them.


While it’s a good thing for them it’s yet another example of two wrestlers who should be in more prominent spots being booked in a throwaway outing. Both ‘The Samoan Submission Machine’ and ‘The Charismatic Enigma’ should be doing far more in TNA than they currently are. So should Magnus for that matter. TNA should want to use that guy before the inevitable hard-to-resist offer form WWE comes in.


If Joe and Magnus are going to continue being associated with one another, which appears to be the case, then why aren’t they in the tag team title match? If they’re going to be a team then they should be used properly as a team. They’re one of the most long-standing units on the roster, and former champions, but they were omitted from the title match. It doesn’t make sense.


I’ll pick the Aces to win. Hardy is notoriously generous when it comes to putting others over and a win here would make sense for Garrett and Wes. Quality-wise I’m expecting little more than fast-paced filler.


The TNA world championship match has been built up well enough but Sting being involved instead of any of the younger talent mentioned above is what's wrong with the company's direction. No matter what those in charge have convinced themselves Sting is not a draw. Neither is Hulk Hogan. The only way TNA will progress as an organisation is if they accept that and use the veterans in supporting roles while aggressively elevating the Roodes, Aries and Storms of the roster. They're the guys who could be draws within a few years (on a larger and more significant scale than they are now) if only they get treated correctly.


Perhaps the plan is for Sting to lose and take up that supporting role. That would be the smart thing to do. There's no sense that I can see in derailing Bully Ray's push at the moment. He needs to be built up into a dominating champion who's dethroned by someone who can play a part in the company's future for years to come. That ain't 'The Stinger'. It's probably AJ Styles, but it could be any of the guys I've already bemoaned the use of.


'Calfzilla' to win a heated but ultimately only passable main event. For the record I'm expecting run-ins from Aces and Eights in this match, specifically DOC and Knoxx. 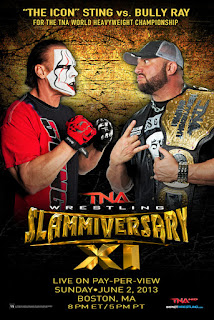 Down on the undercard is where things are really drab. The match that really stands out is the TV title match (yeah, that's still a thing) between Devon and Joseph Park. It will be a comedy affair and possibly feature a run-in from somebody substituting as Abyss. Because a plot that sees Park and his long lost brother Abyss interacting with one another is what TNA fans have been clamouring for.


I'm going to predict a win for Park. There has to be some reason for his continued presence on Impact. Scoring a victory over Aces and Eights is as good a reason as any. In an ideal world he'd win the title, vacate it, and then announce that he and Abyss are jetting off to live on an island together. Then we'd never have to see the tiresome reunion and-or feud play out. I won't get my hopes up for that though.


In the night's final title match Kenny King will defend the X Division gold against Suicide and Chris Sabin. 'Cide, for the record, will likely be played by TJ Perkins. He's the guy who was misused by Ring of Honor last year and left after wrestling a tryout match for TNA.


I don't feel very positive about this match. Suicide gimmick aside I like everyone involved. I was a big fan of ANX and King's proven very capable in his follow-up singles career. TJP is amazing, the sort of wrestler ROH management should have been desperate to hold on to but for some reason weren't. And Sabin is an incredibly talented athlete who's had a run of very bad luck with injuries over the last few years. He could easily be a highlight of a logically booked X Division.


The thing is that the X Division isn't logically booked. Take the decision to have every X Division match be a triple threat match, for example. That's a lazy attempt at making something unique. It's a substitute for compelling booking, as evidenced by the approach of trying to force an air of mystery as to who the third man in any given X match on Impact will be. The X Division deserves to be restocked with half a dozen new wrestlers and prioritised by the booking team. If TNA can't bring themselves to do that they may as well retire the concept. It's of no use or interest to anyone in its current state.


Who'll win? Sabin. It feels time for a title change and he'd get a good reaction winning the belt after returning from an injury.


The seventh match confirmed for Slammiversary is Jay Bradley v Sam Shaw. It's a tournament final, with the winner getting a spot in TNA's third annual Bound For Glory series, the winner of which gets a world title match at, yep, Bound For Glory.


The cynic in me feels that this is a rather elaborate way of including someone in the BFG series who can be used to lose regularly. They may pick up one or two fluke wins but ultimately I think it's pretty safe to assume either Shaw or Bradley will be involved to stop the likes of Robbie E, Kazarian and EY performing endless jobs.


So, really, it doesn't matter who wins at Slammiversary. They're going on to a string of losses. I'll pick Sam Shaw because I like his name better. Yes, that's my reason.


Finally there's Taryn Terrell v Gail Kim. It should be a good match. Terrell has shown promise in what she's been given to do since stepping out if the referree shirt. Her story has been logically booked and she'll be wrestling an established performer in Kim, which should mean people care about and react to the match.


I think the former Mrs Drew McIntyre will win. That would allow for an always popular underdog story and also setup a new babyface challenger to the now-possibly-heel Mickie James.


See what I mean about this being a humdrum offering? The BFG series should help to create some more meaningful rivalries for Bound For Glory in October. I've a feeling the Aces and Eights plot will be nearing completion by then too, which could bring about some pretty meaningful bouts. With four months to get ready that show ought to be something special.


I want TNA to be better than they are. The fact that they've got long term planning is great. They just need to start focusing it on wrestlers who warrant it, not the Stings of the world. My advice to whoever's scripting their shows right now would be to go back and look at what worked last year. At least the right guys were getting pushed then.