Ryback to the Future

Late last year it felt as though every other thing I wrote was about Ryback. He was feuding with the WWE champion, headlining pay-per-views and was prominent on television. At one point he was even more prominently featured on television than John ‘Face of the Company’ Cena.

Since the beginning of 2013 Ryback's push has slowed considerably. Programme-ending Tables, Ladders and Chairs clash with CM Punk aside 'The Human Wrecking Ball' has hasn't had a single noteworthy match this year. He survived to the final two of the Royal Rumble but that’s about it. And that was boring anyway. He has instead returned to his relatively short squash outings and segued into a feud with The Shield.


Anyone else think Ryback looks photoshopped in this picture?

This is not a bad thing. In fact it's probably the best thing that could have happened to the NXT pioneer. His matches with Punk got WWE fans to notice and support him as something more than a bit part player or a star-in-waiting. For a few months he was a legitimate headliner and, as a short burst, that helped his status.

Had it lasted much longer then there's a good chance the fans would have turned on him. We've seen this many times over the last ten years. WWE have raced guys into top spots only to have their audience reject the newcomer on the basis that they've not earned their way into the role.

Working with The Shield is good for Ryback right now for two reasons. One is that they're established as a strong force, not a bunch of jobbed out weaklings. That means that should Ryback gain a win over the posse he's gained a win that matters. He can only beat disposable low card acts for so long before the routine outstays it welcome.

The second reason is that WWE only seem to be interested in using The Shield in tag team matches at the moment. This benefits Ryback because it relieves him of some of the pressure of delivering a worthwhile main event level match. Having two guys teaming with him against three other guys WWE are keen to elevate means Ryback can storm around hitting power moves and bellowing without needing to worry overly about quality.

At the moment I'd say The Shield are probably the favourites to oppose Ry' at WrestleMania. Cena will be heading into his rematch with The Rock and Sheamus is likely to move on after Elimination Chamber’s done and dusted too. There's no clear part for Ryback to play at ‘Mania beyond a continuation of his current feud. 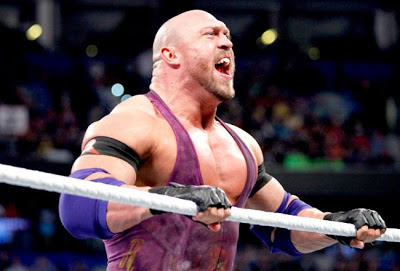 There have been rumours he'll wrestle Big Show or Chris Jericho at the event. Either match could be decent, but it would leave The Shield with nobody to face and would necessitate a heel turn for 'Y2J', which seems unlikely. Keeping Ryback associated with The Shield and finding two new partners is the best way to get six meaningful performers onto what is going to be a packed 'Mania card.


I'm currently expecting Cena to leave WrestleMania with the WWE championship. I’m also expecting him to hold it until at least SummerSlam. That will likely preclude Ryback from immediately re-entering the title picture as ‘The Franchise’ works his way through the existing list of heel challengers. The possibility of a Cena v Ryback title match shouldn’t be ruled out immediately though. If saved for a big event, like SummerSlam, and marketed in the right way it’s a match that could generate a large amount of money for the company.


It may not be a particularly exciting prospect for anyone who likes their wrestling to be, y’know, good, but that’s not WWE’s chief concern. They want to make money. Ryback’s run at the top is a long way from being over.
Posted by Dave at 21:01