For me to say I didn’t expect Jay Briscoe to beat Kevin Steen for the ROH championship would be an understatement. I was absolutely convinced ‘Mr Wrestling’ was going to keep hold of the belt at Supercard of Honor VII. I viewed Jay as a reliable turn that was being used to have a good match on iPPV. He didn’t strike me as a realistic future world champion.


This sort of thing has happened to me before. I was convinced Steen was going to lose his first challenge to Davey Richards’ championship at Border Wars last year, my feeling being that he’d go over in a rematch. Before that I had felt that Richards would be unsuccessful in what turned out to be his title-winning challenge against Eddie Edwards. 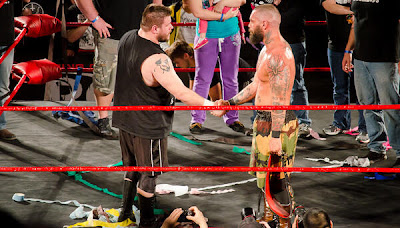 I didn't see this coming
Part of the problem I have is that I’m keen on the lengthy title reigns Ring of Honor traditionally presents. I continually expect each new champion to have a run at the top that lasts in excess of a year and it never quite happens. Not since Nigel McGuinness (whose 545 day reign ended on April 3rd 2009) has anyone held the ROH world championship for more than a year.


The first two confirmed challengers are Adam Cole and BJ Whitmer. They, like Briscoe at Supercard of Honor, don’t strike me as men likely to become ROH champion. In the case of Whitmer I cannot imagine him ever being the top guy. He’s had a couple of tag team title reigns and that seems about his limit. Nothing about him makes me think he can break from his current niche of multi-man matches and brawls in which he defends ROH’s honour.


Adam Cole is a different story. He’s the sort of guy I can imagine rising to the top for a long reign as the ROH champion. Border Wars seems a little early though, mainly because it will be Briscoe’s first defence. I can see it being in Cole’s future if he sticks around long enough though.


A second reign for Kevin Steen looks pretty unlikely while Briscoe’s the champion. Why would the belt be taken off of him and put onto a relatively obscure guy like Jay just to have him take it back again in a rematch? That’s not how ROH traditionally works, and I hope it’s not how they start working now.


Steen’s former stablemate Matt Hardy seems like a better option. At the latest round of TV tapings ‘Mr Wrestling’ was kicked out of the group and Hardy was chosen as the new centrepiece. Furthermore a stipulation match will take place at Border Wars between two members of SCUM and ROH reps Jay Lethal and Michael Elgin. That will see ‘The Self-Proclaimed Icon’ granted a title shot if his pals are victorious.


A scenario in which Hardy defeats Jay Briscoe forcing ROH to turn to Steen to get their belt back is easy to envisage and makes Hardy a pretty credible contender to knock off Jay. Should things play out this way I could see Hardy winning the gold at Best in the World. I don’t see Briscoe being a long term champion and BITW is going to be a pretty big show, so it’s the earliest logical time to relieve him of the belt.


Michael Elgin and Jay Lethal are possibilities too. Elgin earned himself a title shot when he beat Lethal at Supercard of Honor. That match will probably come against Briscoe. If it does there’s a chance he’ll get the win. It would be surprising, considering how distanced ‘Unbreakable’ has been from the title picture, but it’s not impossible. I think he’d make a good champion, as I’ve written before.


Lethal seems more unlikely still. His loss to Elgin will probably mean that it’s a while before he gets another title match but if he ends up challenging his fellow Jay then there’s a chance he’ll win. Ultimately I think he’s the most unlikely guy I’m listing here.


With Steen no longer the champion both members of the American Wolves can challenge for the belt again. Could they win it? Sure. But as with Elgin and Lethal it would be random for either Richards or Edwards to become the champ. Perhaps more random when you consider that they’re being used as a regular combo again and are currently chasing reDRagon (see what I did there?) for the tag titles.


Tommaso Ciampa could make an interesting challenger to Jay Briscoe. He’s been out of action for a while now and could be brought back in to challenge for the top belt. A return feud with RD Evans and QT Marshall seems inevitable but those plans could be put on hold, or scrapped completely, in favour of ‘The Sicilian Psychopath’ aiming for the top. Ciampa could even come back, squash Marshall in a brief match, and then announce his intention to earn a world title match.


The final name that occurs to me as anything approaching likely is Mike Bennett. There’s no reason for that beyond him being a solid character, a decent wrestler and a heel. I think he’d make a good champion but I don’t think he’s the likeliest guy to beat Briscoe.


The man I do think is most likely to beat him is, sadly, Matt Hardy. It’s not something I want to see but there’s a clear storyline reason for the title change which can’t be said for anyone else that I’ve mentioned. While I think it would be great to see Ciampa or Elgin knock off Papa Briscoe’s boy I think the (ahem) honour is going to go to Matt Hardy.
Posted by Dave at 11:28