When I first saw Johnny Curtis wrestle on NXT season four I thought he had the size and height to be a success on the main roster. He could talk and wrestle well too. Unfortunately that wasn’t enough to get a call-up back then.


Curtis won his series of NXT. That was supposed to entitle him to a main roster gig and a shot at the WWE tag team titles alongside his pro from the series, R-Truth. The heel turn of ‘The Suntan Superman’ put a stop to that: Curtis was left without a partner and his title shot was quickly forgotten about.


His short stint on SmackDown, which started several months after he’d won NXT, got off to a surprisingly promising start when he appeared in a backstage segment pouring milk all over himself. He appeared in several similar vignettes, each featuring some sort of play on words, over the course of the following months. It seemed as though WWE had decided to introduce him with a minor push as a member of the mid-card.


That ended up not being the case. In Curtis’s in-ring debut he was squashed by Mark Henry, becoming just another victim of ‘The World’s Strongest Man’s’ startling rise to the main event and the World Heavyweight championship. The Curtis push had been for nothing.


Following that JC became a regular on the never-ending NXT Redemption. He made a couple of appearances last spring when the show was restructured into its current format before disappearing. He continued making non-televised appearances on house shows and at TV tapings as Johnny Curtis, before finally being repackaged as Fandango in late October.


Before I address the Fandango gimmick it’s worth pointing out that not getting a main roster spot at any point over the last two years has probably helped ‘Dirty Curty’. Had he been promoted to RAW or SmackDown (the separate roster era was in its final throes at this point) Curtis would have been quickly forgotten about and sunk down into an enhancement role. At best he could have cobbled together a Zack Ryder-esque spot for himself, but that’s not what most wrestlers aspire to. Being held back on the NXT and dark match circuit allowed Curtis to keep improving. 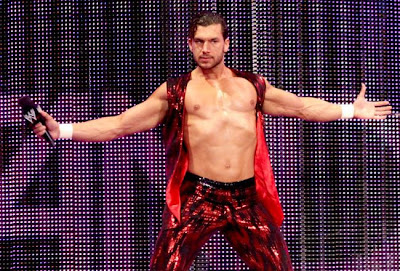 Faaaaaan... daaaaaan... goooooo!
The Fandango gimmick is tremendous. It’s exactly the sort of thing WWE should be doing right now (and no, I’m not being sarcastic). The slow building nature of the push, the multiple delays with regards to the in-ring debut, and the story of the character wanting to have his named pronounced correctly (you've got to let the vowels breathe), are great.


The best thing about the persona is that Curtis doesn’t look or sound like anyone else on the roster. Everything from his ring gear to his entrance music sets him apart. At a time when the majority of WWE stars all look and sound like one another being distinguishable is incredibly useful.


There’s still time for things to go wrong. Ideally Fandango will win his debut match against Chris Jericho at WrestleMania but it won’t be disastrous if he loses. What will be disastrous is if Fandango suffers a quick loss to ‘Y2J’. Losing quickly after such an excellent build-up would be the Mark Henry incident all over again.
Posted by Dave at 21:25