Jim Cornette left Ring of Honor under a cloud last year, the result of a blowup backstage that came about because Corny disagreed with the direction of the company. Yes this is the same Jim Cornette as had been guiding the promotion for around a year and a half. He had been relieved of his duties but was sticking around as a consultant. The aforementioned blowup likely occurred because Jim's opinions weren't carrying the weight he was used to them carrying.

This disagreement means it's unlikely Cornette is to do business with ROH any time soon. This is great news from a booking standpoint, Delirious has turned the company around in the space of months. ROH is now a federation worth watching again.

Cornette's public split from ROH is the perfect excuse to have him come back as an on-screen heel. His past as a manager is well known. He could return to manage a disenfranchised member of the locker room or invade alongside one of his old pals. For some reason I can't get the image of Cornette managing Vader in ROH out of my mind. I'm sure something better than that could be concocted, but it's a decent example of the sort of guy I mean. A veteran who wouldn’t seem out of place in the territories of yesteryear. 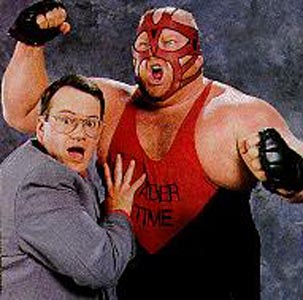 "Close the door, dammit! We're having a private moment!"

Obviously there's a strong similarity to the SCUM plot, which puts the kibosh on the entire thing (as does sanity). A Cornette return while that faction is still doing the rounds wouldn't work. It would create two heel forces set on the destruction of ROH. Nobody needs to see that (ain't nobody got time for that).

Something else that would make a Corny return unlikely while they're still around is that a large part of the reason SCUM exists is because of the group’s dislike of Corny. Corino's gang and Cornette feuding with ROH at the same time would possibly make the world collapse in on itself due to lack of logic.

The idea could be used for a DVD taping. A one off appearance of Cornette would lend itself nicely to a one night only setting. It could be announced that he's signed a client to help him get his revenge on the company. As it wouldn't be an ongoing story pretty much anyone who fits the bill of a "Cornette guy" could be used. That includes Vader. Yes, he does still wrestle. I checked.

If not used for a DVD taping it could be held off until the latter half of next year. Waiting much longer than that would make it a dead and pointless story. Doing it sooner would coincide with SCUM which would be a bad idea, as I've mentioned.

It’s not going to happen anyway, of course. Cornette was fired and, in a typical move, has slated the company for the decision. Never mind that it's what fans had called for or that it was the right thing for Ring of Honor’s continued growth. Cornette's reaction to being let go, and indeed ROH's decision to get rid of him in the first place, means that it’s almost guaranteed that we’ll never see this scenario play out.

It doesn’t matter. SCUM's a better idea anyway.
Posted by Dave at 20:41