Not two months ago TNA were putting out a fairly enjoyable product. It wasn’t enough for them to rival WWE’s dominance and it wasn’t going to encroach on ROH’s business but it was good wrestling television. That’s something TNA has not always been capable of putting together.


They had a plethora of hot acts at their disposal. Bully Ray had, against all the odds, made it to the top of the wrestling world as a featured singles babyface, supported by the ever popular Jeff Hardy. Beneath them were Christopher Daniels, having one of the most riotous runs of his career, Bobby Roode, and Austin Aries. Magnus seemed poised to crack the main event while Samoa Joe, AJ Styles and James Storm all seemed to be gearing up for comebacks of one form or another.


Somehow TNA have managed to destroy what they’d worked hard to cultivate in the space of about a month and a half. We now have a product that’s not really worth following. Again. You only need to glance at the ratings for the April 11th Impact to see I’m not alone in thinking this: the show did a 0.93 rating, the lowest it’s done all year. 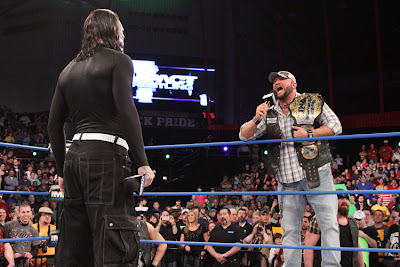 This feud? Not a draw
TNA had presented a stacked card. Taryn Terrell took on Gail Kim (which doesn’t sound especially interesting but it had been built up for a significant amount of time) and Aries and Roode defended their tag team titles against Chavo Guerrero and Hernandez in what was essentially billed as a feud-ending collision. There was to be further advancement in the story of AJ Styles’ allegiance. In the main event Bully Ray defended his TNA world championship against Jeff Hardy in a Full Metal Mayhem match (basically a TLC match, the name changed to appease the mighty WWE and its lawyers).


It was a big card (notably described on air as pay-per-view quality) that TNA had put a lot of work into preparing, that guaranteed big names in matches and developments worth paying attention to. That it did such a poor rating indicates that viewers simply don’t care about the direction TNA’s going in.


I think TNA’s main problem is that its roster feels stale. The company just doesn’t seem to know how to introduce new talent. Gut Check has not proven the answer to the problems. Neither has the signing of Chavo. The best thing the company could do right now is cut a large portion of the roster (at least a third of it) and introduce some fresh blood. No matter how popular and talented the likes of Hardy, Daniels, Aries and Roode are they’re going to continue to be wasted if they face the same guys all the time and waste their time stalling through uninteresting storylines.


Do something different with the talent. Bully Ray may be effective as a heel but he was more effective a couple of months ago as a good guy. Fans were enjoying rallying behind him. Turning him just to swerve the audience (and it wasn’t really a swerve, everyone saw it coming) is incredibly counterproductive. On a similar note AJ Styles is not going to be well served by playing Sting to the Aces and Eights’ nWo and TNA’s WCW.


While they’re at it the format could do with a change. Opening with a promo every week is such a dated approach to wrestling broadcasts. More than that it’s exactly what WWE does. If TNA wants to be an alternative to the sports entertainment brand they need to be genuinely different. Put the focus on wrestling.


Most importantly the entire Aces and Eights plot needs to be dropped. It’s not going to happen because TNA has recorded One Night Only pay-per-views until the end of the year and the gang is prominent in the majority of them. I don’t think TNA can begin presenting the product it should until it gets rid of this boring, 90s style stable.


I said all of this and more last month. But that was before TNA did a terrible rating presenting what was essentially a PPV Lite card. The promotion has all the tools it needs to construct a great wrestling product. It just doesn’t want to let itself.
Posted by Dave at 20:31