Whoever puts together event graphics for Ring of Honor has had a busy time over the last month. The original picture showed Pro Wrestling NOAH stars Naomichi Marufuji and Taiji Ishimori along with the men who would wrestle for the ROH world championship, champion Kevin Steen and challenger Adam Cole. Steen lost the belt at Supercard of Honor VII, meaning he had to be taken off and replaced by new champ Jay Briscoe. Then Marufuji suffered a knee injury so he had to be taken off the graphic too, replaced by Paul London. 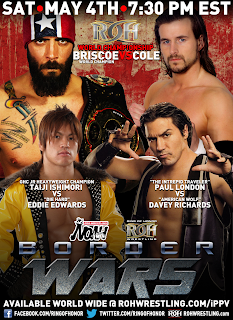 It feels like everyone's had a turn being on this poster

Personally I'm more excited about Davey Richards facing London than I was about him facing Marufuji. I'm more familiar with London's work so I have more of an idea of what to expect. Obviously I know enough about Marufuji to know he wouldn't have had a bad match with the former world champion, it's just that I don't feel any particular connection with him.

London hasn't been in an ROH ring in almost ten years. He's spent his time away ageing, smiling manically at Vince McMahon, and wrestling for other promotions. Notably WWE and PWG. Notably not EVOLVE or Dragon Gate USA. I don't know if much can be read into that but I do find it interesting that 'The Intrepid Traveller' hasn't cropped up as a regular for his old boss Gabe Sapolsky. He's the sort of guy I'd expect Gabe to want to bring in. Then again he raves about John Davis so it's not like he's got conventional tastes.

London's match with Richards will be a first time ever encounter and I'm expecting both men to do everything they can to make it memorable. My initial feeling is that London will get the win because he's a returning star. I'm hopeful ROH will want to use him again. If they do then there are few betters ways of reintroducing him than with a win over arguably the company's best wrestler. I'm interested to see what sort of a reaction London gets from fans beyond the obligatory "Welcome back" and "You still got it" chants.

Richards' tag partner Eddie Edwards will face Taiji Ishimori in the only top three match on the card that has remained unsullied since being announced. Ishimori is the current GHC junior heavyweight champion but the title won't be on the line. It could be turned into an impromptu title match at the last minute but I strongly doubt it. Why would ROH forego the chance to advertise a title match just to book a fairly generic surprise.

I was leaning towards 'Die Hard' losing this because when champions lose non-title matches outside of WWE and TNA it tends to mean something. As Edwards works for NOAH I've reconsidered under the logic that him winning here could be used to set up a title match on a future tour of Japan. Whether he'd win that or not I have no idea, but I expect this match to be good enough for NOAH to want to promote it too.

Down on the undercard BJ Whitmer will wrestle his former tag team partner Rhett Titus. Personally I think Titus needs a win more than Whitmer so that's the result I think we'll get. That result will keep SCUM looking strong too, which is a priority for ROH at the moment.

Speaking of SCUM, two members of the stable will face Jay Lethal and Michael 'The Power Mullet' Elgin in a heavily stipulated tag match. If the ROH guys win Steve Corino must leave the company. 'The King of Old School' has stated if SCUM lose he'll leave wrestling altogether. I don't think that's the official stip though, nor do I think it will be true should SCUM lose.

Not that that matters because it seems pretty likely SCUM are going to win. Corino is important as a spokesman for his group. Getting rid of him just doesn't seem possible if the SCUM plot is going to continue, which I think it is. Assuming that's the case then SCUM will earn Matt Hardy an ROH world title shot and Corino won't just stay, he'll join Kevin Kelly at the announce table as a colour commentator. Both things seem like the direction ROH is going in. SCUM needs to become a powerful threat so that when ROH eventually wins the feud they've accomplished something impressive.

The two wrestlers representing SCUM haven't been announced at time of writing. It could really be any of them but I'd quite like to see a team of Jimmy Rave and Cliff Compton. Anyone not involved in this match is probably going to be at ringside or interfering in Titus v BJ so it's not like there's any great need for one SCUM member to be in this match over another.

In another doubles match ACH and Tadarius Thomas will face Caprice Coleman and Cedric Alexander. This seems like a safe bet for show opening honours. It should be good. It's a pairing I've wanted to see since ACH and Thomas were put together. Either team could win (my most frequently expressed opinion in Ring of Honor previews, I know) but I'll pick ACH and Thomas because I think they're building towards a tag title challenge.

Mark Briscoe versus TV champion Matt Taven (for the title) sticks out as a possible comedy outing. Mark's redneck Kung Fu is the sort of thing you can imagine Truth Martini over-selling while Scarlet is the sort of thing you can imagine Mark over-selling. Hopefully we'll get a few minutes of comedy before the two settle down for a proper match. Taven deserves the chance to have an outing that lasts a decent amount of time. His previous two iPPV outings have both been stuffed with interference and had a generally rushed feel to them. He's been left overshadowed and looking like a bystander. This should he his show to get a decisive victory.

A peculiar addition to the show is the three-way match pitting Roderick Strong v Mike Bennett v Mike Mondo. The reasons for this happening are tenuous. Basically Mondo involved himself in a singles match Strong and Bennett had on the post-Supercard TV show. It's an excuse to get the three guys featured on the card. I don't see a problem with that: Strong and Bennett are good, it's always nice to see Maria Kanellis, and Mike Mondo... well... he's got nice hair and a great beard.

Strong to win. He's lost on the last two iPPVs. He's not the sort of guy that should be losing too often.

Finally there's the main event: Jay Briscoe defending the ROH world championship against Adam Cole. A Cole heel turn has been teased over the last month. He interrupted Jay's inaugural promo as champ to say he was going to beat him and then swaggered backstage, a big fat chip perched on his shoulder. On last week's show he teamed with Jay to take on SCUM members Matt Hardy and Rhino (yeah, the old babyface pay-per-view opponents teaming against a common enemy on TV trick, it's a classic). During that he tagged himself in just as Jay was setting things up for a win, accidentally superkicked the champ and then fell to a Gore from 'The Manbeast'. That the kick was an innocent mistake doesn't matter: it was Cole's selfish glory-seeking that caused his team to lose.

If Cole is going to turn heel this is a good way of building up to it. I said a month ago that it's possible we'll see SCUM interfere in this match, beating down Briscoe and presenting Cole with the chance to go for a pin and win the title in a dishonourable fashion. I still want to see that. It would be a good way of demonstrating his new character and his desperation to be the champion.

Beyond the potential to further the ROH v SCUM story I'm not especially fussed about this match. I like both guys but I'm still not sure of how Jay Briscoe is going to hold up as a featured singles performer. Hopefully this match will convince me that he's a good pick for the role.

I'm expecting Briscoe to retain here and go on to face Matt Hardy at Best in the World in June. Should 'The Icon' win the title there, as I suspect he will, he'll be able to launch straight into a programme with Michael Elgin, who has a guaranteed title shot of his own. If Matt Hardy isn't the obvious pick to beat Briscoe I don't know who is.

The only unanswered question for Border Wars is whether or not Kevin Steen will appear. He's not been seen since he got beaten down by SCUM at the TV tapings in New York (which aired on April 20th). I'd normally expect him to be off television for longer but as Border Wars is taking place in Canada, and 'Mr Wrestling' is Canadian, it seems fair to assume he'll put in an appearance. The likeliest thing I can think of for him to do is hit the ring to fend off SCUM.

I'd recommend watching this show. ROH have been on a roll with their iPPVs lately. I don't see this one being the trend-breaker.