Sadly I won't be at WWE's RAW taping from the O2 on April 22nd. I was at last year's tapings from the same venue and so was part of those epic "Yes!" chants that were present on the show from start to finish. They’d peaked a few weeks earlier at WrestleMania XXVIII and proven a hit at the following evening’s RAW, but people weren’t sure they’d stick around for the long run. I think part of the reason we (and Daniel Bryan) are still hearing them now is because of the London audience being so into them.


It's that experience at the O2 that makes me absolutely certain that the London crowd will do everything in their power to keep the Fandangoing phenomenon going.


And it is a phenomenon (or, perhaps, a phenomena). What started as an arena full of wrestling fans enjoying themselves by singing camp entrance music has led to Fandango’s entrance theme (titled ChaChaLaLa) becoming a sensation away from the wrestling business. It’s been played at Everton home games. The Houston Texans cheerleaders have been shown attempting to sing and dance to the music (they failed the former but nailed the latter). The music has appeared on various new broadcasts and you can even find videos of people attempting (mostly unsuccessfully) to nail the theme at home.


Perhaps most impressively the track romped its way up the UK charts. You may have missed this last one as the BBC decided they didn’t want to play it as that would have forced them to acknowledge the existence of WWE. That’s what your tax money’s funding: a corporation that refuses to admit that professional wrestling exists. 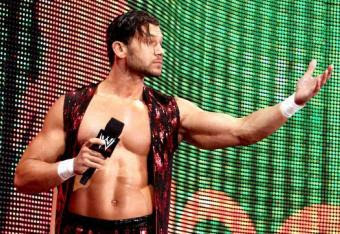 I will go on the record and say that I'm a big fan of Fandango's hair
The Friday 12th edition of SmackDown saw the Boston crowd try to continue the trend within WWE. They did a pretty good job but they just didn’t have the same kind of fans present. WrestleMania, being WWE’s biggest event of the year, attracts the most hardcore wrestling fans from around the world. SmackDown was basically business as usual.


The same will not be the case when RAW rolls into London next week. Fans travel from all over the country, and Europe, when WWE records their television product in Britain. It’s not a WrestleMania level crowd, but it’s close enough: a group of very passionate fans who only get the chance to attend a handful of TV shows a year in the home country. It’s a loud, raucous environment, people happy to be a part of the show.


Basically the New Jersey RAW benefited from a lively, passionate and inventive crowd that helped launch the craze. The humming sensation will continue throughout this week’s WWE TV output but I think it will be London’s crowd that decides its fate. Expect the crowd to get the chant over. London wrestling fans have a job to do, and take it seriously.


As great as the chants (or hums, whatever you prefer) are I don’t think this is going to catch on in the way the “Yes!” chants have. Getting a yes or no chant going is far easier to orchestrate, and it’s something that can be applied to a wider variety of situations at a wrestling show. I’d love the Fandango hum to catch on but I can’t see it being a huge craze long term.
Posted by Dave at 21:31