With the recent announcement that America's E! TV channel will be airing a show about WWE's Divas the future of the WWE Network is once again looking dubious. The company have been trying to get their own channel underway for a few years now. In 2011 they aired an ad on RAW which seemed to indicate the channel would be ready for viewing by WrestleMania XXVIII. They probably regret that now.

Several rumours have swirled regarding how the Network will function. At first we were told WWE were simply going to set up a brand new channel. When they realised how much that would cost and they started looking around for an existing channel to buy and convert. We've also been told it could be a "premium subscription channel" or, hilariously, a YouTube channel. I'm all for YouTube trying to get into the TV market by offering serialised content made with a decent budget but as WWE already has multiple TV shows airing in dozens of countries it would be a bizarre and unnecessary move for them to make.

The decision to flog the Divas' show to an existing channel does not bode well for the WWE Network. Since the project was announced a Diva-centric show was said to be planned and it was assumed it would be one of the channel’s focal points. That WWE has sold the show likely means they've decided to make some money from it now rather than sitting on it until their own channel is ready to roll.

Basically it's a sign than the WWE Network is delayed yet again or that it simply isn't going to happen.

It's not all bad news for WWE though. While their (probably ultimately doomed anyway) TV station project has suffered yet another setback at least the Divas are going to be getting some increased exposure. It won’t be lumbered with the stigma of being on a wrestling channel either, which means there’s a chance non-fans may watch and become new additions to “the WWE Universe". Best of all it's a chance for them to reboot their currently rudderless Divas division. 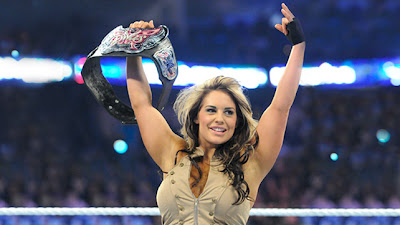 Will that belt ever mean anything again?

WWE's ladies' league has been meaningless for quite some time. That talents like Gail Kim, Mickie James and Victoria (now Tara) left the company is part of the problem. That caused the quality of in-ring performances to sink. To a lesser extent the same can be said of Eve Torres and Michelle McCool. WWE has been unable or unwilling to retain the services of women who want to put on good wrestling matches.

They’ve not helped themselves though. The booking of what women have stuck with them has been less than inspirational. The women have clearly become an afterthought, if that, for WWE’s overworked writing team.

The preferred approach when John Laurinaitis was talent boss seemed to be to hire models who looked the part. Knowledge of or even a passing interest in wrestling were not a requirement for the job.


That's changed under Triple H. He seems far keener keen on bringing in women with wrestling backgrounds. Paige from Britain and Emma from Australia spring to mind. Signing Ric Flair's daughters wasn't a horrible idea either, because second and third generation stars can work out (see The Rock, Mr Perfect and Eddie Guerrero, just off the top of my head). H3 even gave Amazing Kong a shot. That her run with the company didn't work out is nobody's fault, it’s just the result of sad and unfortunate circumstances.

Two new women have been hired to be a part of Total Divas. Natalia Eva Marie, a model (showing ‘The Game’ isn’t against hiring non-wrestlers to be trained from scratch) will drop her first name and be known as Eva Marie. Joseann Alexie Offerman, a singer and dancer, will become Jo Jo Offerman. This indicates WWE are keen to restock the Divas division, as does the rumour that Paige will soon be called up to the main roster.

Whether or not this show can save the Divas division from the pit of oblivion it's currently in remains to be seen. If it’s used as a tool to flesh out the cast with interesting and varied characters it will stand a chance. My instinct is to say that it will need a match on each show in order to be a success. Surely a programme about female wrestlers and their hardships needs to show matches in order to show what the women actually do?


That may not be the case though. The show could be used to give people a reason to care about the women and function as a launching point for TV and pay-per-view feuds. Sort of like a Divas-only RAW but with a reality TV twist.

Whatever the setup of the show it will determine the fate of the company's female wrestlers. If it flops then the division will be even more damaged and pointless than it is now and probably require a rest for a while. It's all or nothing for the girls. They collectively need to use the show as a way of making themselves and their title an important part of WWE programming.
Posted by Dave at 19:12