I've always felt Jack Swagger would benefit from a comedy entourage. He's a big, serious wrestler with the right look but instead of presenting him as a serious dominating force WWE don't seem to be able to stop themselves from turning him into a figure of fun. He was presented as something of a clown upon his initial call-up to ECW and, barring a brief run as Serious Swagger, he's had a twinge of comedy to him ever since. Look no further than the Swagger Soaring Eagle and his "dad" joining him on TV to see what I mean.

There's also this promo, split in two here and here. A perfect example of Swagger being presented as a joke.

I'm not complaining. I like Swagger being presented this way. It could be a tool for success rather than a hindrance if it were fully embraced by the writing team. It’s not at the moment, sadly. All it is is yet another example of WWE being unwilling to experiment and follow through on their ideas.

Swagger's 'Real American' act would stand a greater chance of being accepted (and would be far more palatable) if he and Colter were easier to laugh at. Increasing the number of seconds and hangers-on he has would be a good direction for him. Give him an old fashioned entourage!

Colter's already in place as a windbag, narrow-minded racist of a manager. A guy could be installed to proudly wave a flag as Swagger walks to the ring during his matches. He wouldn't need to say anything, just waving the flag would be enough. Swagger could return to doing a couple of press ups in the aisle before the match and a coach could be installed to shout encouragement or clap as Swagger does what most able bodied people are capable of. 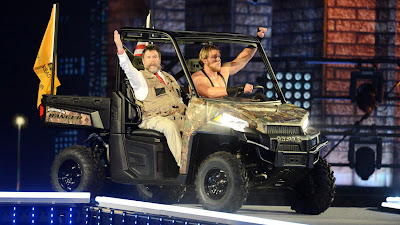 Look at this and tell me he's not a comedy performer

Maybe the Soaring Eagle could be brought back by Colter. A symbol of a once great and powerful nation that he and Swagger are going to return to glory (by winning wrestling matches, dammit!). Maybe a cheerleader could be placed at ringside. Is there any greater symbol of America than the humble cheerleader? No. Of course not.

In the case of the flag waver and the cheerleader it would be a good way to utilise NXT wrestlers who aren't going to make it to the main roster otherwise. Mike Dalton immediately springs to mind. He doesn’t strike me as someone who’s ever going to get beyond Main Event and Saturday Morning Slam level on his own merit.

Meanwhile Summer Rae would make a pretty good cheerleader. I’m going on looks there, because that’s what would be most important to a gimmick cheerleader. Whether she can do any cheers or nor not isn’t important. If Dolph Ziggler and Mike Mondo can learn how then she can too.


It could even provide a new use for established acts. David Otunga could be used as Swagger's legal adviser (a role I like for Otunga as it allows him to interfere in matches and take bumps without hassling us with watching him wrestle). Guys like Derrick Bateman and Michael McGillicutty could be added to form a Team USA type stable. Colter would make as good a mouthpiece for them as he does for Swagger and they'd make excellent bump fodder.

Basically Swagger's gimmick should be that he's a serious competitor who continually surrounds himself with foolishness. The beauty of putting the focus on Swagger is that it would make him just as much a part of the comedy as everyone else involved: the joke being that he chooses to spend more time hiring seconds than on prepping for matches. The entourage being a regular thing would also allow for periodic changes. That would help keep the concept, and 'The All American American' fresh.